LORD SUMPTION: I’m yet to meet a single person who plans to obey the ban on meeting friends and family indoors… why on earth should they?

Everything in science is provisional but one thing is certain about Covid-19. Lockdowns do not stop the disease.

They merely postpone infections until after they are lifted. They can work only if they are kept in place indefinitely. We do not need epidemiologists or mathematical modellers to tell us this.

All we need to do is look out of the window and see what is happening in the world. Infections are roaring up in every country where a lockdown has been imposed.

We are now about to go through a repeat performance of a policy that has demonstrably failed. 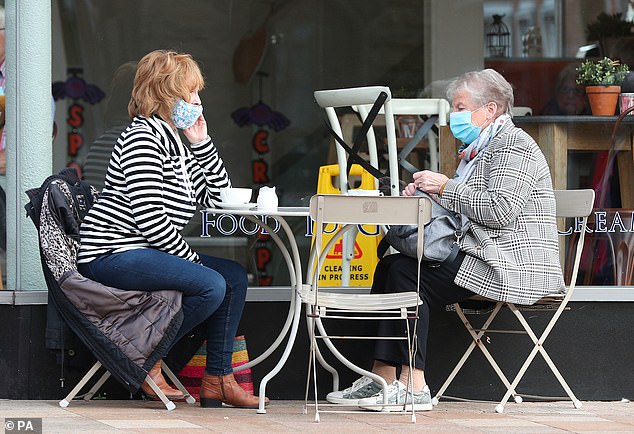 Everything in science is provisional but one thing is certain about Covid-19. Lockdowns do not stop the disease. Two women are seen wearing face masks outside of a cafe in Lancashire before the Tier 3 lockdown came into effect

Our Government is planning to destroy businesses and jobs, to increase poverty, to aggravate mental illness, and to inflict untold distress on many millions of active and healthy people who are unlikely to suffer serious symptoms even if they are infected.

There will be layers of humbug to divert attention from what they are doing. Ministers will heave and moan about the pain that this causes them, as they assure us that it will all be worth it in the end.

The Leader of the Opposition will throw in his hap’orth of support for some of the most poorly reasoned decisions of modern times. But failed policies are never worth it.

If politicians want to be taken seriously, they have serious questions to answer which they have evaded so far.

First, what are they trying to achieve? Health Secretary Matt Hancock told the House of Commons last week that the object was to ‘suppress’ the virus. But what does that mean?

The Government has accepted since May that Covid-19 is going to be with us long-term. Its scientific advisers have consistently said that lockdowns only buy time.

If the Government is trying to buy time, which seems to be the most that its measures could ever achieve, what is the use of that? The virus will still be there waiting for us when time is up. 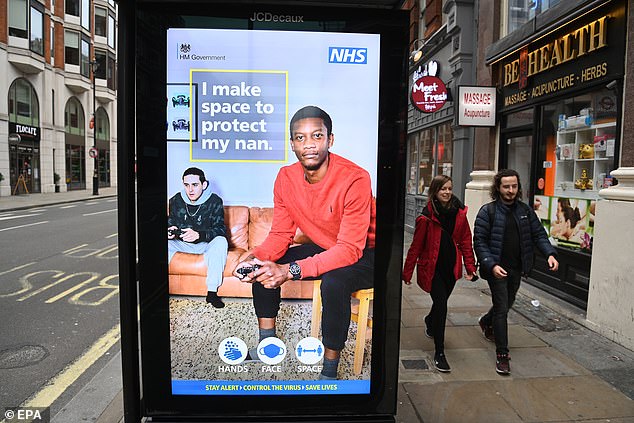 We are now about to go through a repeat performance of a policy that has demonstrably failed. London (above) is pictured above in Tier 2 lockdown

Buying time until what? Until the NHS has caught up? It caught up in April, the one thing for which Mr Hancock deserves unstinting praise.

Until the Government has acquired enough basic competence to run a proper test-and-trace programme? Will it ever?

Until there is a vaccine? We do not know when that will be, or how effective it will be.

Some vaccines give lifelong protection against smallpox or measles. The consensus seems to be that an anti-Covid vaccine is unlikely to do that.

Like the flu vaccine, it seems more likely to confer only a partial and temporary immunity, and then not on everyone.

The most bizarre feature of the current situation is the refusal of Ministers to learn from experience. If a total lockdown of several months did not work, either here or anywhere else, why does the Government imagine that lesser measures such as the Rule of Six, travel bans, pub curfews or two-week ‘circuit-breakers’ will do any better?

The reality is we have no idea what our Government thinks it is doing. In the absence of answers to these fairly obvious questions, we have to assume that Ministers have no idea either. We are not told what their exit plan is, presumably because they do not have one, apart from ‘Something will turn up’.

There is a variety of different views in the world of epidemiologists and immunologists – 35,000 or so public health scientists and medical practitioners have signed up to the Great Barrington Declaration, drawn up by three eminent specialists a fortnight ago.

They point out that indiscriminate attempts to stop infections prevent healthy people from acquiring natural immunity and that buying time only prolongs the crisis. Both of these things are likely to increase deaths.

The signatories argue that we should protect the vulnerable who are at risk of serious illness or death and allow the others who are not at risk to be exposed to the disease and acquire some immunity.

Nobody, least of all the declaration’s authors, pretends that this is a perfect solution. It will not eliminate all deaths. Natural immunity may not last (although it will last at least as long as a vaccine).

There will be some whose vulnerabilities are not identified. There will be vulnerable people who would rather take the risk and enjoy life. But it is a better bet than the current ill-thought-out measures. The Great Barrington Declaration approach may or may not be right but it is at least a coherent case. It stacks up.

The Government’s case does not stack up. It is full of holes, left by the silence of Ministers. So far, the only response of the lockdown enthusiasts has been an attempt to smear the Great Barrington authors with allegations they are the tools of Right-wing doctrinaires or antisemites. If there was a better answer than abuse, we would no doubt have heard it.

The programme of the Great Barrington scientists is at least consistent with experience. The success of the Swedish model has been passed over in embarrassment by UK Ministers who have no answer to it.

Stockholm, where the epidemic struck hardest in the spring, has a density of population, an age balance and a public health system comparable to those of major British cities. But we have preferred to follow the example of countries that have failed to contain the virus rather than the one country that appears to have succeeded.

There is a nasty divide opening up between those who want to take reasonable steps to protect themselves and live as normally as possible without going over the top and zealots who think that, as a matter of principle, the state should take over our lives, occupy our sitting rooms and keep us infantilised at home. What has happened to rational thought in Britain?

Rational thought has been banished by fear. Fear encourages unthinking responses. It leads to intolerant conformism and ill-tempered abuse of anyone who steps out of line. 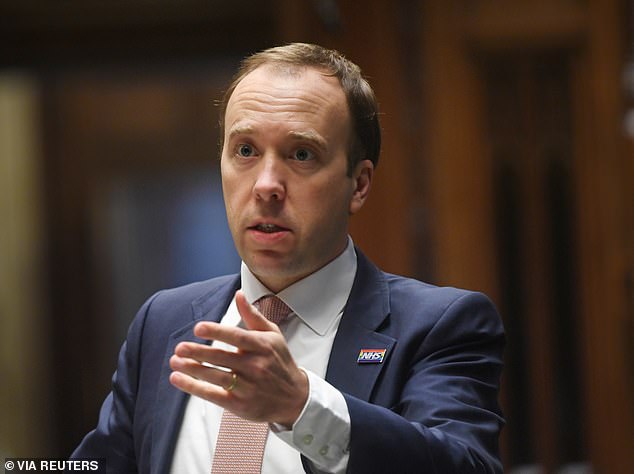 If politicians want to be taken seriously, they have serious questions to answer which they have evaded so far. First, what are they trying to achieve? Health Secretary Matt Hancock told the House of Commons last week that the object was to ‘suppress’ the virus. But what does that mean?

It provokes panicked demands for government action, without reflecting on the limits of what government action can achieve. This is an atmosphere in which the advocates of coercion and authoritarian styles of government have always thrived.

But the main culprits are not the public but Ministers, who have got caught in a trap of their own making. They stoked up people’s fears to justify their decisions and induce compliance. They promised the impossible and, when the inevitable failure came, they blamed it on the public for not complying with their commands. The real reason Ministers have not dared to answer the questions posed by their policies is that their purpose is not to suppress the virus, which they must know is impossible. It is to shield themselves from responsibility.

They believe they will be criticised for the Covid-19 deaths but that they will get away with the indirect consequences of their brutal countermeasures: the cancer deaths, the loneliness and mental breakdowns, the poverty and job destruction, the public and private bankruptcy. Truth is the first victim of this process but it is not very high on this Government’s agenda.

Having got itself into a pattern of coercion, the Government does not dare to change course, for fear of discrediting its own past decisions.

Yet even fear has its limits. As public trust drains away, it is forced to keep up the atmosphere of panic by ever more hyped-up alarms, misleading statistics, draconian fines, bullying threats, appeals to sneaks and informers and cavalier disregard for the basic values by which people live.

I have yet to meet anyone in London who intends to comply with the ban on receiving friends and family in their house. So here is a final question for the Government to answer: Why on earth should they?

Inside Jake Paul's $6.9m LA mansion after he's raided by the FBI