A man just revealed that he landed an interview with the same ’employer that just fired him’ – so he turned up with a fake mustache on, and fooled almost everyone!

The man, who from the US and is known as @Firr on Twitter, is going viral, after he explained that a job recruiter coincidentally set him up with an interview with the company he had recently been let go from. So what did he do? He put on a disguise and went to the interview, and although it totally worked at first, let’s just say things didn’t end so well for him.

‘I’m currently unemployed. A recruiter lined me up an interview… With the employer that just fired me. I wish I was making that up,’ he wrote on Twitter on November 4. 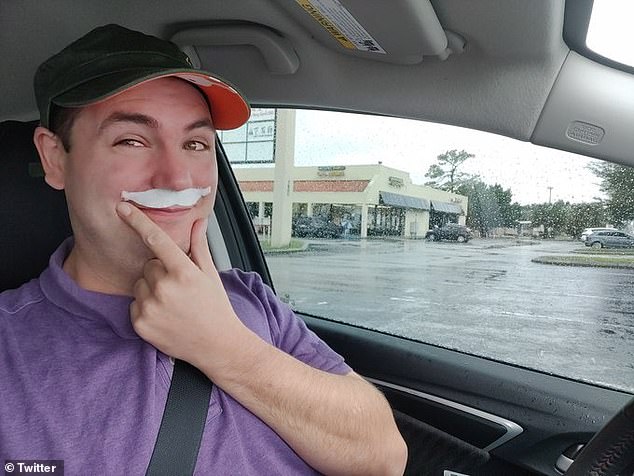 A man, who is known as @Firr on Twitter, revealed that he landed an interview with the same employer that just fired him – so he went with a fake mustache on, and fooled almost everyone

Hilarious: He explained that a recruiter coincidentally set him up with the interview, and he couldn’t pass up on the opportunity to have some fun 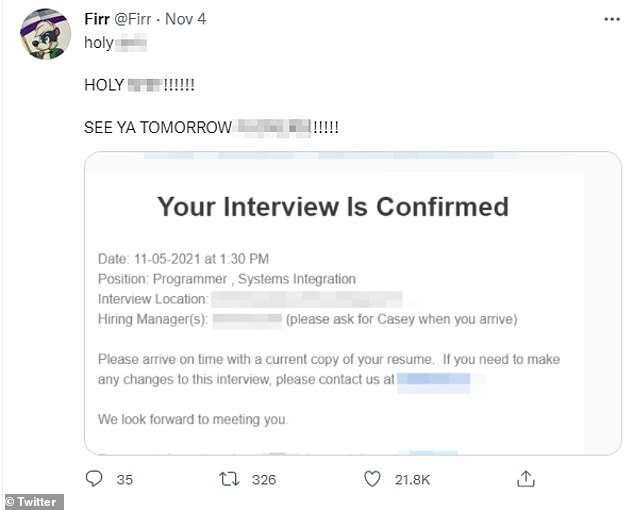 He gave his followers a play-by-play of what went down, and he quickly went viral for the hilarious interaction 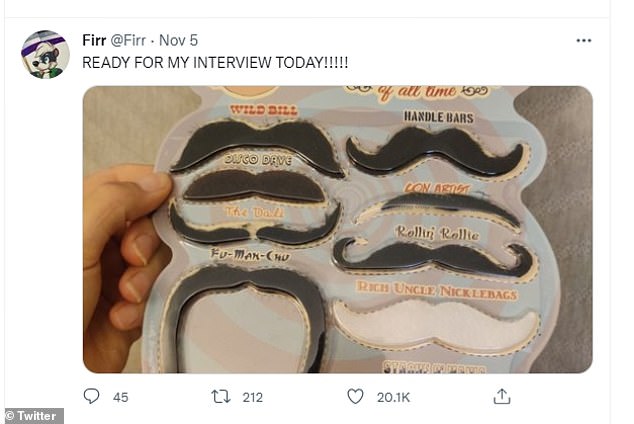 His disguise worked wonders. First, he met with two different people who had no idea he had been recently let go from the company

‘So I heard you’re looking for a new programmer, may I ask what happened to your previous employee?’ he joked.

He then shared a screenshot of the email confirmation that he received for the interview.

One day later, the programmer shared a picture of a pack of fake mustaches that he had bought, which he captioned, ‘Ready for my interview today!’

‘They’ll never guess!’ he wrote, alongside a snap that showed him wearing one of them.

Naturally, the internet was totally invested and on the edge of their seats waiting to find out what went down at the interview. And thankfully, he gave us all a play-by-play throughout the entire thing.

It turns out, the interview started off with someone he had never met before – a hiring manager – so he was in the clear so far!

‘The gentleman at the front desk was unfazed by my glorious facial accoutrement. Waiting to get called back by the interview manager,’ he tweeted.

‘The hiring manager is a guy that I haven’t met before. He’s asking the usual questions,’ he continued.

‘The resume I passed doesn’t have my old job listed by name, but it’s a copy paste of the job listing.’

After giving him a bunch of snacks, the hiring manager said he was going to ‘go grab one of the engineers,’ and the man knew it would probably be somebody he knew. Luckily, it was someone he had only met a few times.

‘I’ve seen him in the break room once or twice but don’t think I ever spoke outside of hellos,’ he explained. ‘Let’s see if my disguise holds.’

After the engineer came in, he said, ‘I think I’ve seen you around. Did you ever freelance here before?’ The man replied, ‘I think so. I’ve freelanced a lot of places.’

He added in another tweet, ‘Chat went well! He had to run though, so I’m back in the waiting area to go head over to the other building and meet the engineering team.’

And that’s when things got really interesting. The engineering team was made up of the people he used to work with every day, so he knew they might figure him out. But before heading over to meet his old team, one of his followers asked what he would say or do if he got caught.

‘My current plan is to deny it, then dramatically rip off my mustache and say, “You fools it was me all along!”‘ he replied.

And when someone else asked him what he would do if they actually offered him the job, he explained, ‘If your company is so disorganized you can interview a person a week and a half after you fire him there’s probably some bigger systemic problems that would be a red flag.’

Finally, he met with someone from the engineering team, and coincidentally, it was his old boss.

‘Holy s**t. He sat down. Super serious. “So are you here to really re-interview for this job?”‘ the man tweeted.

He decided to play dumb, and responded, ‘I don’t understand the “re” part, but I would like to know more about this role.’

Finally, he met with someone from the engineering team, and coincidentally, it was his old boss. Unfortunately, the jig was up 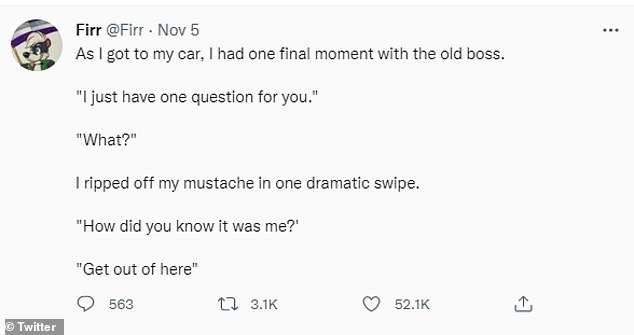 He was escorted out of the building but made sure to finish strong. Before leaving he ripped off his mustache as promised, and asked his former boss, ‘How did you know it was me?’ 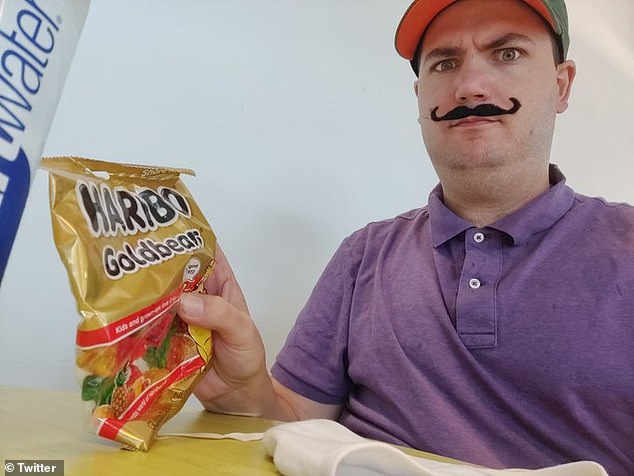 Despite being figured out, the man called the whole thing a ‘win.’ He wrote: ‘I got like eight bucks in snacks. Who really won here?’

After that, the jig was up.

‘He sat back down with the hiring manager. Hiring manager was furious I didn’t mention I just got fired from this place. I just said I couldn’t recall! Things change so much in two weeks, you know,’ he tweeted.

‘The fact that I’m still sitting in this office after over an hour is an absolute win, as far as I’m concerned.’

After that, he was escorted out of the building. But as he left he made sure to ask, ‘So I’m not getting the job?’

‘As I got to my car, I had one final moment with the old boss,’ he added.

He ripped off his mustache ‘in one dramatic swipe’ and asked him, ‘How did you know it was me?’ He replied, ‘Get out of here.’

‘They spent an hour of their time interviewing a reliable well qualified candidate, but ultimately realize that it wasn’t going to work. I got like eight bucks in snacks. Who really won here?’ the man concluded.

Who Is Podrick Payne On ‘Game Of Thrones’? Learn Everything About The Character Before Season 8

Ulrika Jonsson: Why are women made to feel ashamed for wanting sex?