That’s one way to kill the mood! Duvet set with a rose pattern that looks a lot like splatter of blood turns bedroom into ‘gruesome crime scene’

A lover’s attempt at a romantic gesture went horribly wrong when the floral duvet and pillow set they dressed the bed resembled a blood-splattered crime scene.

John Donoghue, from Wales, found a snap of the bedding fitted on a dark wood bed, joking it looked like ‘a particularly gruesome crime scene.’ The bedding actually circulated on Reddit over the summer but gained new popularity thanks to John’s post.

Making light of the situation, the army veteran and author shared the picture on Twitter, joking that the ‘boudoir’ looked like a ‘gruesome crime scene’.

People agreed that the duvet cover was indeed straight out of a murder scene, and joked someone needed to call the fictional the fictional forensic team from the TV show CSI. 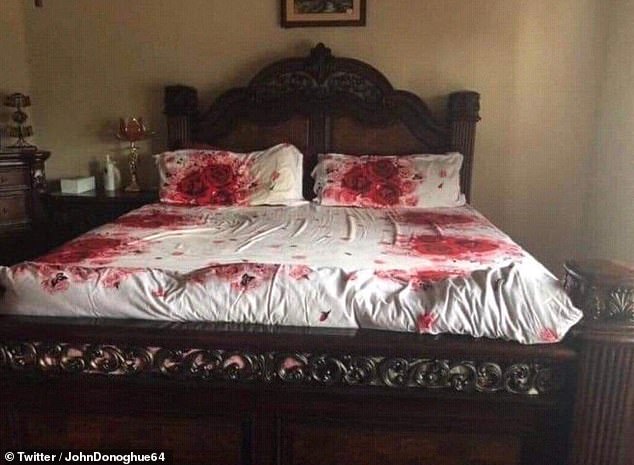 John Donoghue, from Wales, shared a picture of this gruesome bedding joking he thought it was ‘romantic’ on Twitter

While quite innocent up close, the covers and pillow look jarring from afar, with the roses looking like pools of blood.

And a pattern of sprinkled rose petals spread across the cover ended up looking like blood spatter, completing the already disturbing picture.

It didn’t help that the bed frame was made of dark wood, as was the rest of the furniture in the bedroom, giving the whole thing a sinister air.

People wasted no time in chiming in with their own murder jokes, in a post that has now racked up more than 7.200 likes and 1.200 retweets.

‘The trio of roses on the pillows, are particularly horrific,’ observed another.

‘New bedding, yeah yeah. Own up, where have you buried her,’ joked another.

‘He was such a quiet chap. The perfect neighbour. We never thought he would be capable of… that…’ another joked.

Some users even suggested that the gruesome bed sheets would make a perfect deterrent for unwanted visitors.

‘Perfect for the guest room when you really don’t want people to stay,’ one said.

On the 15th Anniversary of 13 Going on 30, Some Fans Are Just Realizing This Crazy Casting Fact