MCDONALD’S is rolling out reusable “rented” coffee cups that customers return after drinking – saving them 20p and helping the environment.

Northamptonshire is the centre of the ground-breaking trial that is set to be rolled out globally at McDonald’s and potentially rival chains. 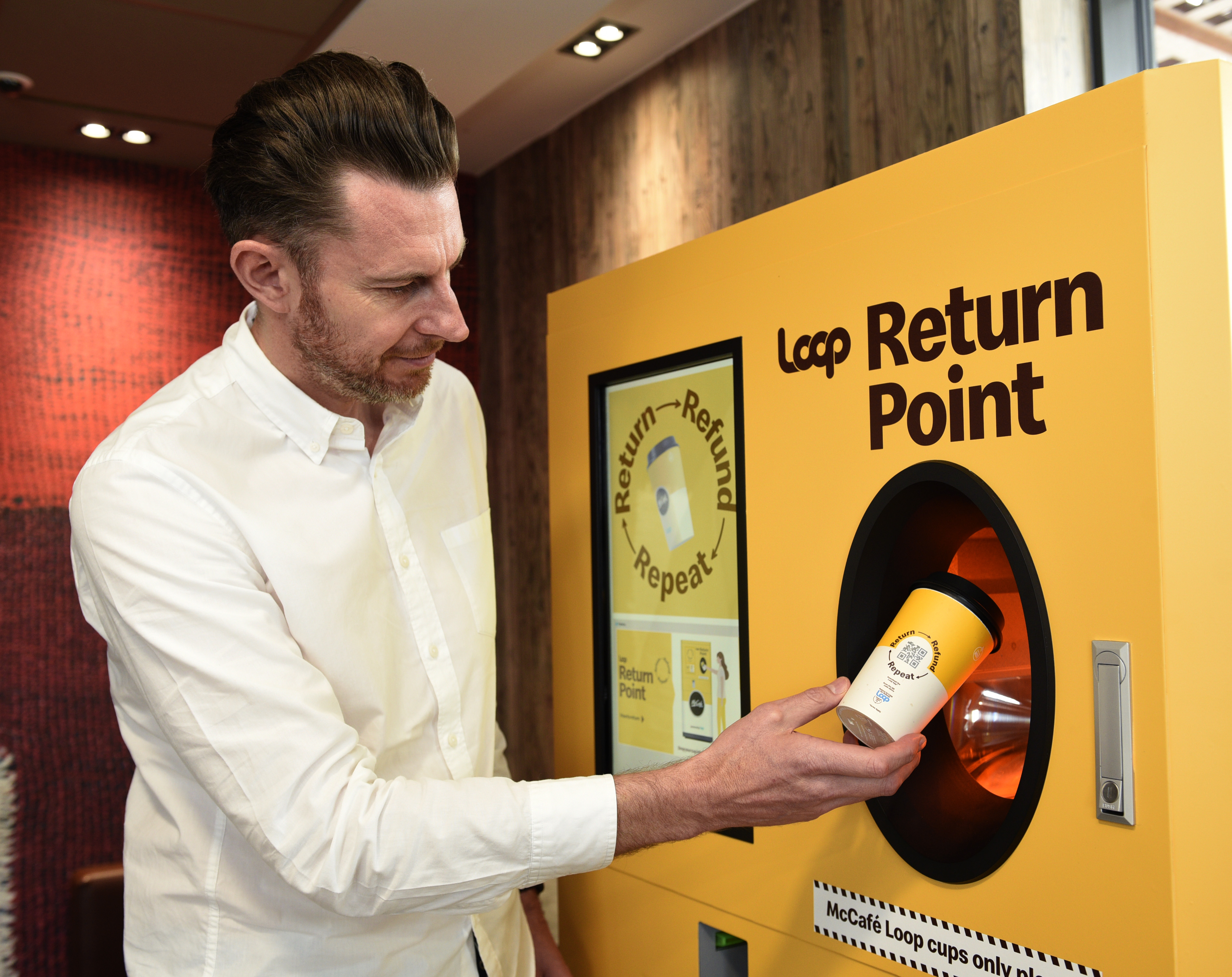 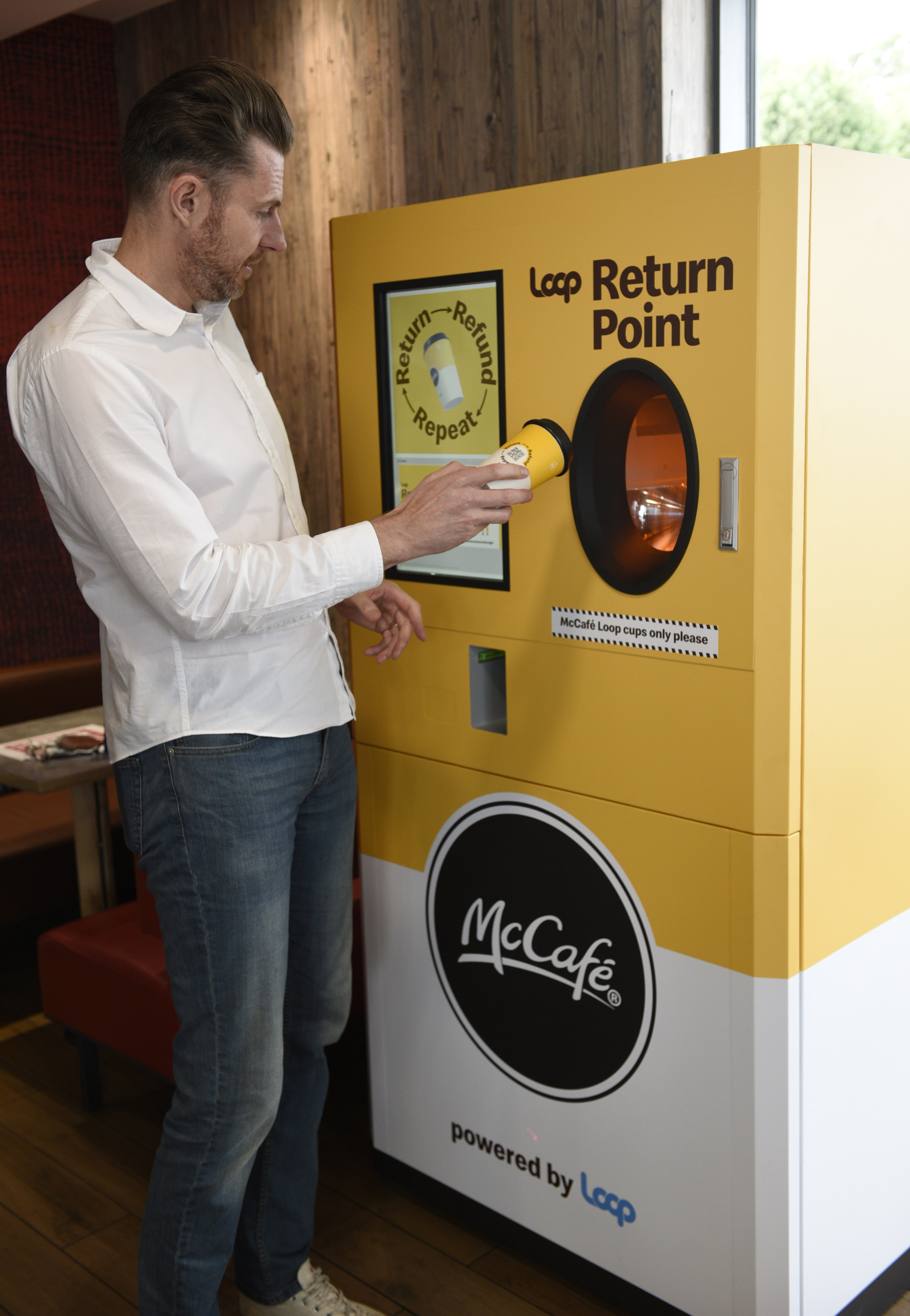 It will help reduce the 2.5billion single-use coffee cups that go to landfill in the UK each year – and the hundreds of billions globally.

McDonald’s says the new system gets around the problems with normal reusable cups – such as customers forgetting them or not wanting to carry dirty ones around.

Stephen Clarke, from partner Loop – who provide and wash the cups –  said: “This way you are renting a cup rather than carrying a reusable cup around all day. It is all about convenience.”

As well as doing their bit to cut down on waste, customers get 20p off each medium coffee, tea or hot chocolate – making them 79p for a standard white coffee or tea, or £1.29 for a latte.

Customers do pay a £1 deposit – but they get it back, either in cash  or as a credit on an app, when they return the cup.

They can return it at the restaurant right after drinking, on their next visit or other soon-to-be rolled out drop off points provided by Loop in Tesco.

If a customer forgets their cup at their next visit they can pay another £1 deposit and return both cups next time.

It is not simply washed on site – cups and lids are taken in bulk to Loop who deep clean them.

The cups are made of special plastic – engineered polypropylene – with recycled paper cup material inside for insulation.

Loop – part of US-giant Terracycle –  has begun producing reusable containers for all sorts of goods in a bid to cut usage of single-use plastic.

Later this year, they are launching a similar pilot for around 100 everyday products like ketchup, washing detergent and yoghurts in Tesco and other supermarkets abroad.

Eventually, the idea is that washing centres will replace recycling plants and other forms of waste management as more and more restaurants and shops embrace reusable packaging.

It’s a throwback to when milkman left bottles on doorsteps each morning and picked up empties.

Down the line, the coffee cup scheme will be included in the MyMcDonald’s app, but for now customers order in shops or via drive-thru.

The trial is at six McDonalds – four in Northampton and two in nearby Wellingborough. They have been picked as they are close to the Loop cleaning centre.

McDonald’s bosses in the US are eagerly watching the scheme – and hope it will be a key plank in their bid to cut waste.

The UK is leading the way in reusable packaging.

Loop’s Stephen Clarke added: “If we can make reusable cups and packaging go to scale, as we hope, then waste management will become more about cleaning than recycling, incineration or landfill.

"You will have washing and cleaning centres all over the UK instead.”

He said: “It’s great to see McDonald’s trialling a solution that will mean less packaging given to our customers. I hope this will keep Northampton litter free.”

Customer Rebecca Timmins, 37, videographer, was in the London Road, Wellingborough branch, when we visited.

She said: “It’s nice to be doing my bit for the environment but it’s a nice money saver too. I only have one a day, but that’s a £1 a week. 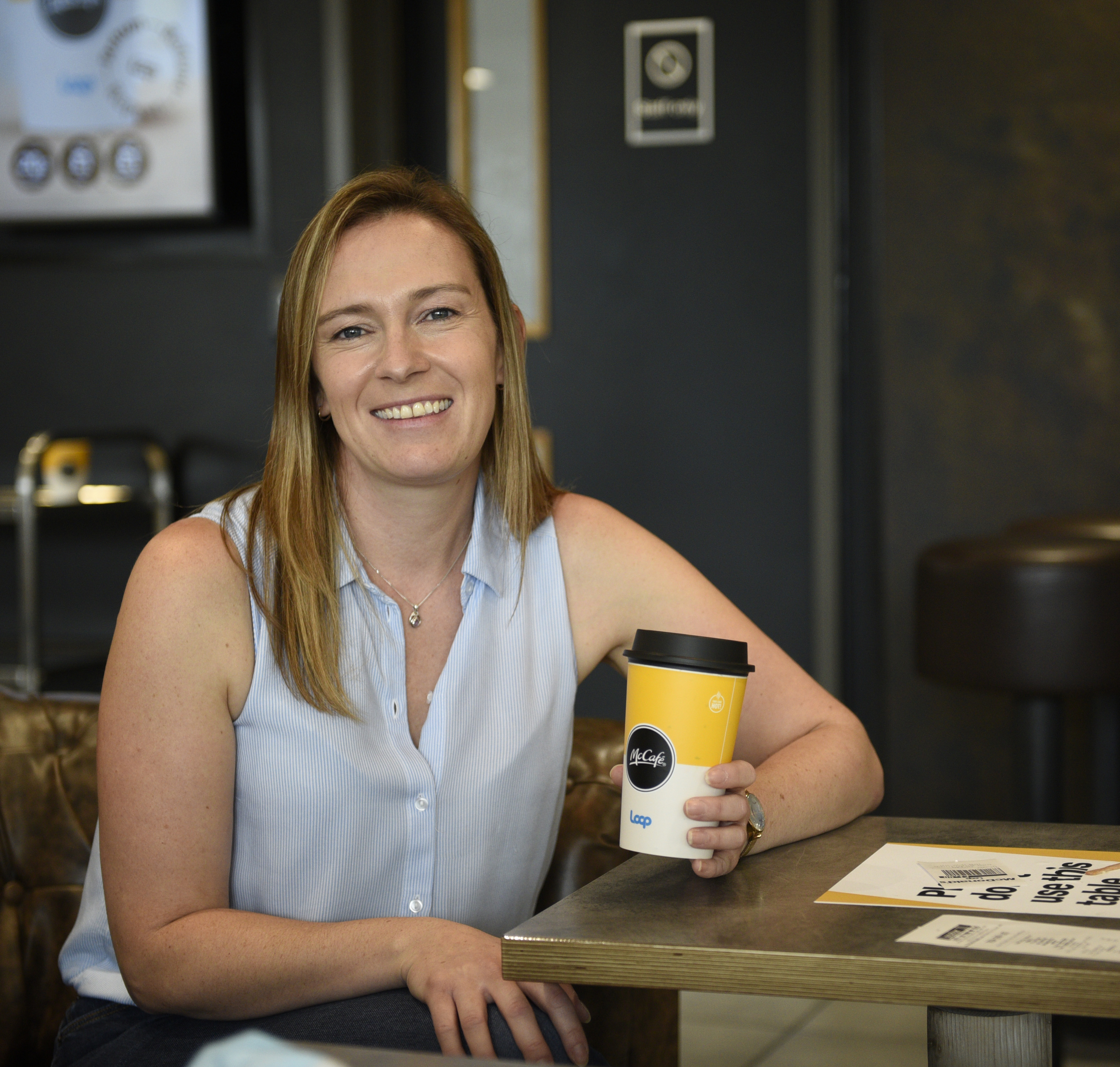 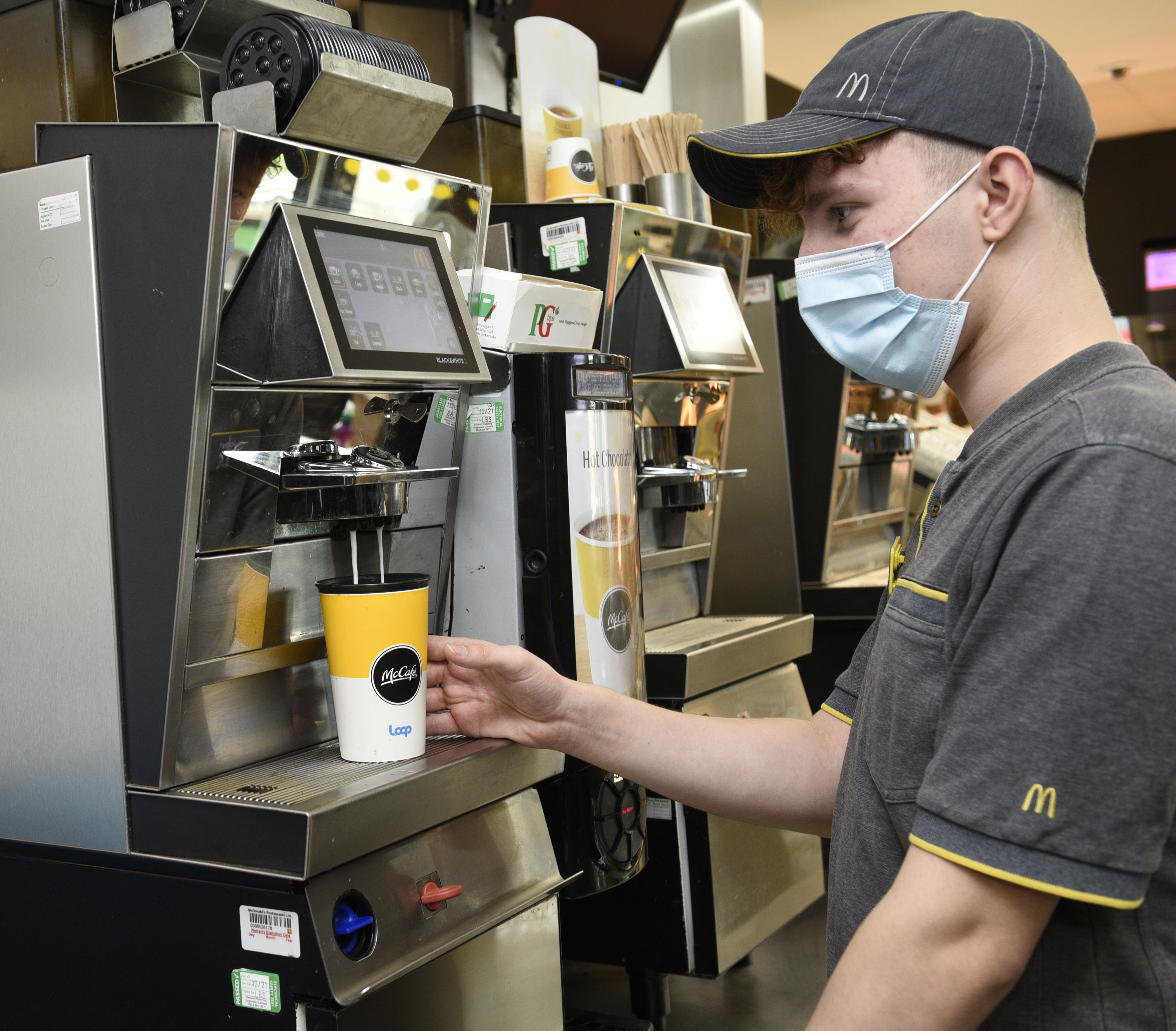 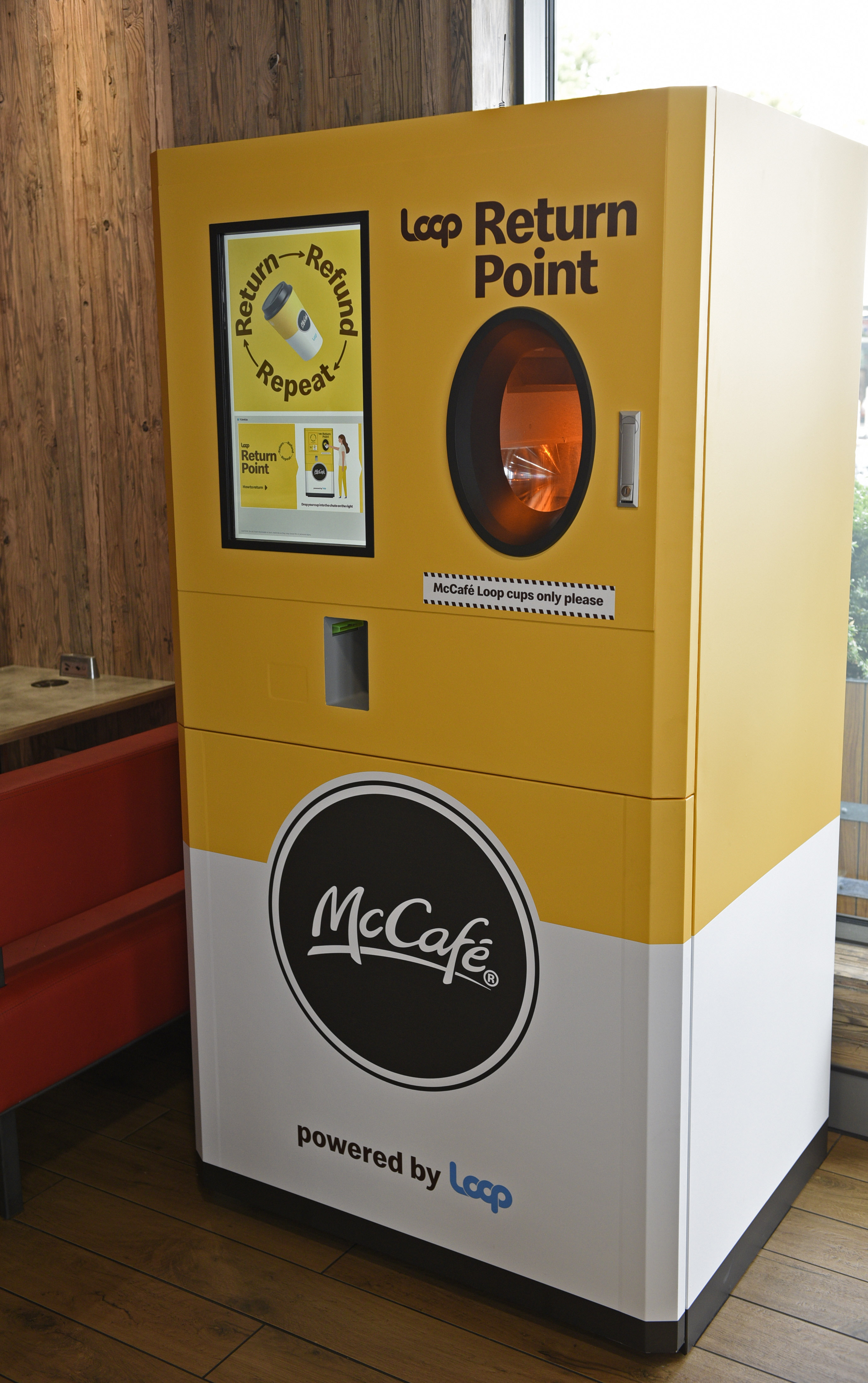 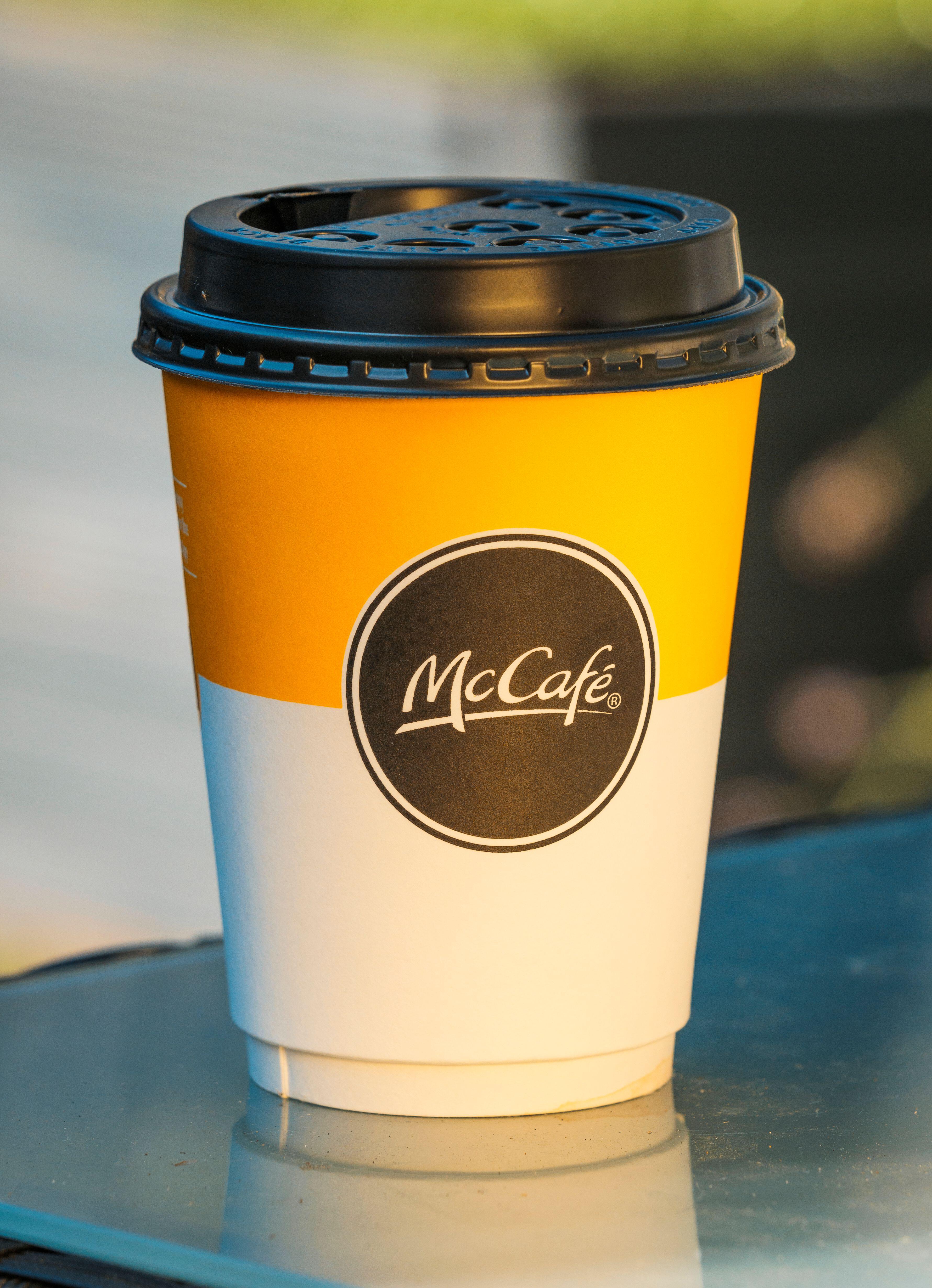 “There was nothing extra to do buying it – and afterwards there is no pressure to return it right away. I will drop this back next time.”

Britain gets through 2.5 billion single-use coffee cups a year – yet only one in 400 end up being recycled.

Globally the figure is in the tens of billions.