While Meghan may have a complicated relationship with her own father, her on-screen father has revealed his pride for the royal after the birth of her first son.

Wendell Pierce, 54, appeared on This Morning with Phil and Holly, to open up about his relationship with his former-Suits costar, who he starred alongside for seven years.

His appearance comes as Meghan, 37, and Prince Harry, 34, adjust to their new role as parents, after welcoming their son yesterday, weighing 7lbs 3oz .

The star – who walked Meghan down the aisle in the popular television programme – said he thinks she’s coping well with her role in the royal family.

‘The one True North for her is the fact she loves the prince, when all else is in doubt.’ 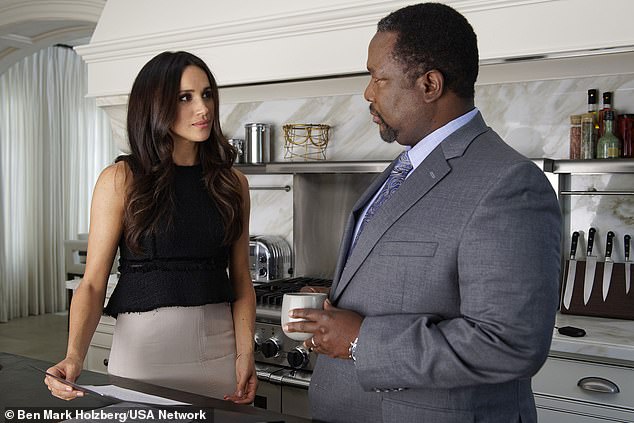 Wendell Pierce appeared in Suits alongside Meghan Markle and played the royal’s on-screen father. He told This Morning he was so proud of the Duchess, and hoped she would return to acting

Wendell appeared on the This Morning sofa and spoke of his disbelief when he first heard Meghan was dating Prince Harry.

He told Holly and Phil: ‘I didn’t believe it. I heard the rumours, I thought they were dating. But I didn’t realise it was serious. I was like, “yeah right”.’

He revealed he only realised how serious the couple were when a mysterious character appeared at work alongside Meghan.

He said: ‘One day there was this very mysterious stern security guy on set – an MI5 type. And then I knew, “oh wow this is serious”.’ 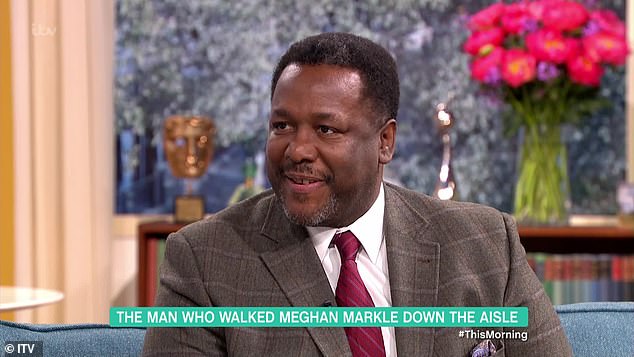 He told Holly and Phil that he hadn’t believed Meghan was dating Prince Harry at first. But he was stunned when a mysterious ‘MI5 type’ man arrived on the set of Suits, and suddenly realised how serious the relationship was

And as Holly and Phil asked him how he felt his former on-screen daughter and friend was handling the pressures of royal fame, Wendell admitted how proud he felt of Meghan.

The actor went on to say that he hoped Meghan would return to acting, and said it was his one regret about the Duchess of Sussex’s scenario. 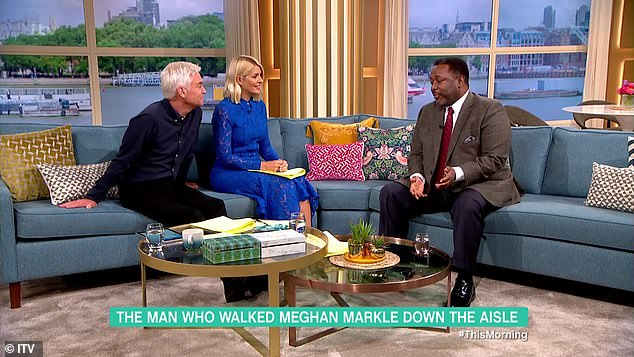 The star also said he felt Meghan handled the pressures of fame well, and said her utter love for Prince Harry would help her through 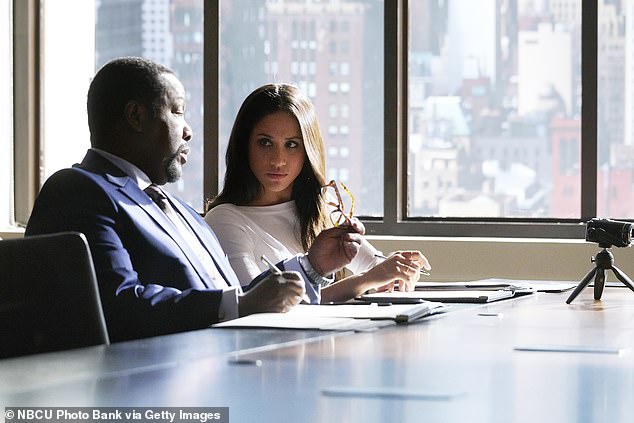 The actor said he hoped Meghan would return to acting, as she was a ‘very talented’ actress. The Duchess of Sussex left the career when things became serious with Prince Harry

Calling her ‘very talented’, he said: ‘One of the things I always say, my only regret – she probably won’t act again.

Pierce – who played Robert Zane in Suits – has spoken in the past about the special bond he has with the Duchess of Sussex.

In 2018, he explained how he shared a moment he ‘cherishes’ with the Duchess of Sussex before they filmed the season seven finale – the last episode they starred in together. 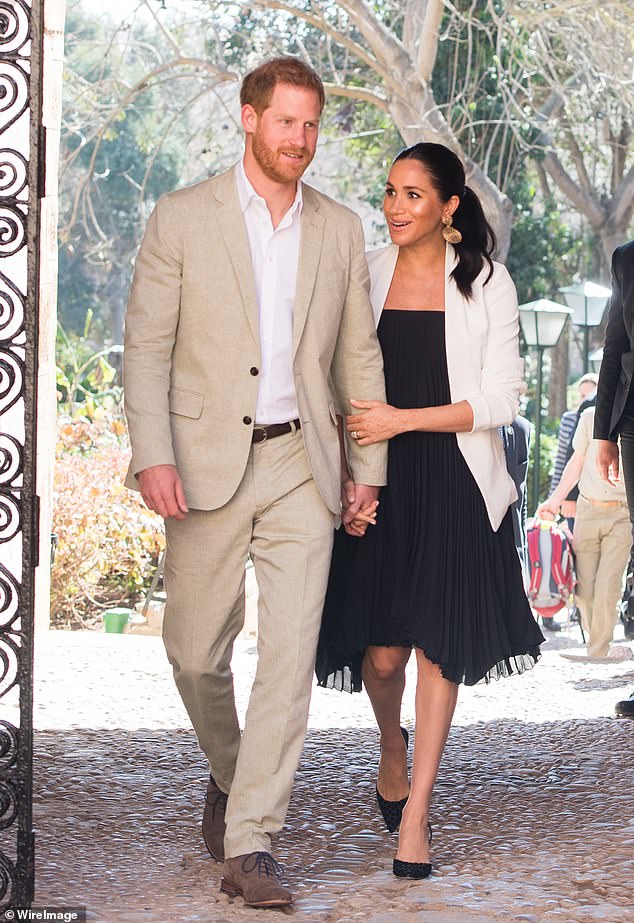 Meghan and Harry welcomed their first child – a baby boy – yesterday morning, with the Prince saying the couple were ‘overjoyed’

He said that he told Meghan – who played Rachel Zane in the legal drama – that he was her friend ‘no matter where you are or what’s going on’.

He continued: ‘It’s going to be amazing but I want you to know that I’m your friend, and no matter where you are or what’s going on – if the fishbowl that you’re in ever starts getting to you – you can call me.’

The Wire star previously revealed that her and Meghan used to talk about her romance with Harry ‘in code’ on the Suits set so that gossip wouldn’t leak out. 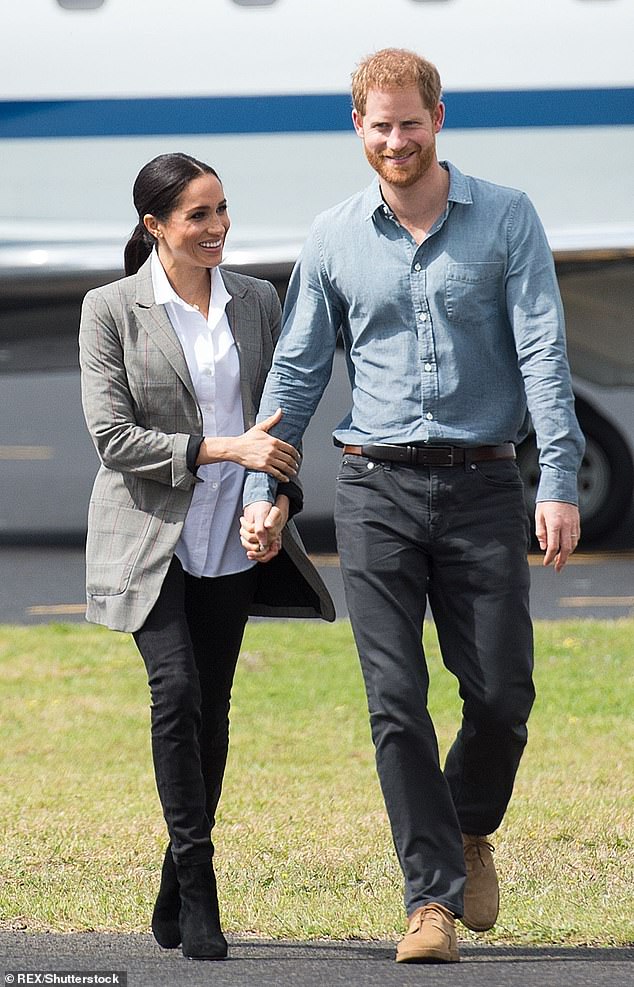 Speaking on Harry Connick Jr’s chat show, he said: ‘We always talked about him in code really. You know, “How you doing?”, “Oh I’m going to London, coming from London’, whatever.”

While many of Meghan’s Suits co-stars attended the royal wedding at Windsor Castle in May, Pierce said he was ‘unable to attend’ the big day.

He played Robert Zane, Rachel’s father and a high-powered attorney, from season two of the legal drama.