Millions of Australians will have to wait longer for a COVID-19 vaccine as the federal government races to increase domestic production and reorganise later stages of the rollout that were relying on the AstraZeneca jab.

Prime Minister Scott Morrison announced on Friday the government had doubled its order of Pfizer’s vaccine, securing another 20 million doses, which will arrive from October. But it acknowledged changes to medical advice on the AstraZeneca vaccine would further delay the national immunisation program. 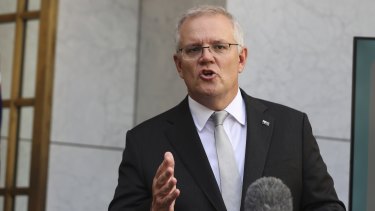 Prime Minister Scott Morrison: “We want to open up more, we want to do it safely, we want to ease restrictions.”Credit:Alex Ellinghausen

Mr Morrison said the government could not yet outline a timetable for the “recalibrated” rollout. Until Thursday, the government had been confident all first doses would be completed by the end of October.

“We’re not in that position,” he said when asked to give people certainty that all adult Australians would have at least one dose by Christmas.

Despite this, state and federal leaders will work towards opening up the country, including options for international travel without the need for quarantine. National Cabinet also committed to releasing daily data about the vaccine rollout.

The doubling of the number of Pfizer doses comes after the government’s decision to follow the advice of the Australian Technical Advisory Group on Immunisation (ATAGI) on Thursday to use this as the vaccine of preference for under-50s after it considered the medical evidence linking a rare but serious blood clotting condition with the AstraZeneca vaccine.

But a range of medical experts rushed to reassure Australians the AstraZeneca vaccine was still safe for people aged under 50 if they wished to have it and were aware of the risks.

Pfizer is currently delivering roughly 130,000 doses a week, but Health Minister Greg Hunt said that would dramatically increase from May, with all 40 million due to be delivered by the end of the year.

“We are working with them on the possibility of bringing forward as many of those doses as possible,” he said.

Chief Medical Officer Paul Kelly said he was advising his own father to get the AstraZeneca vaccine.

“He is 86, he has health conditions and I have advised him to take the AstraZeneca. It’s very safe for him,” Professor Kelly said. “And the benefit of him having that vaccine … far outweigh any of the risks, even the issues that we have been raising today.”

“This [blood clotting] condition is seen more commonly in younger people and the risk of COVID … as you are over 50 exponentially increases. The ratio of benefit to risk is massively in favour of getting vaccinated,” he said.

Mr Hunt said the basic settings of the vaccine rollout were “largely unchanged” for phases 1a, 1b and 2a. Those phases cover frontline healthcare and quarantine workers, aged care residents and staff, people with underlying health conditions and older Australians.

“For those who may be immuno-compromised or frontline workers who are under 50, then right now we are working with the states and territories and the medical authorities to revise that part of the program so they have access to Pfizer. That will take time.”

More than 1 million vaccine doses have now been given to Australians.

The federal government is considering how to adjust phase 2b – in which healthy adults aged under 50 would be vaccinated – using mass vaccination sites and ramping up domestic production in a bid to speed up the rollout.

GPs and pharmacists were intended to deliver the bulk of phase 2b vaccines using AstraZeneca because of the ultra-cold storage requirements for the Pfizer shots.

“We’re considering all the options,” he said.

The federal government is also considering how to boost domestic production of COVID-19 vaccines.

Asked whether CSL should switch to making the Novavax vaccine, Professor Murphy said the government was in discussions with CSL about whether it could produce other vaccines but, for now, it could make only one type at a time. He said Australia still needed significant quantities of AstraZeneca.

Australia’s doses of Novavax are expected to start arriving from overseas between July and September.

Leaders have asked the medical expert panel to come up with levels for how much of the population would need to be vaccinated for Australians to start travelling overseas and returning without having to go into hotel quarantine, and whether travel bubble arrangements can be set up with other low-risk countries.

They also agreed to ease domestic restrictions so venues are allowed one person per 2 square metres, and large ticketed and seated gatherings can operate at 100 per cent capacity.

‘This can’t go on’: Crossbencher stalls bid to extend state of emergency

Does ANY broadcaster want to be linked with the Dirty Dozen?