Mixed race woman, 21, who spent years straightening her afro hair after being called names like ‘poodle’ as a child reveals how she finally started loving her curls in a moving TikTok clip

A mixed race woman who was bullied and called ‘poodle’ because of her Afro hair has racked up over six million views on a moving TikTok diary showing how she learned to love her curls.

Hannah Connaughton, 21, from Stockport, Greater Manchester, who describes herself as ‘visually white’ but ‘has an Afro, explained she has always been insecure about her curly locks and was bullied at school.

The film and media student said after years of straightening her hair, she had grown so insecure about her heat damaged tresses that she would get upset and struggled not to ‘feel ugly’.

She recorded a video diary on TikTok, bravely opening up about her insecurities and asking for advice in the hope of receiving a few tips on good products.

But the video struck a chord with people across the globe who’ve been struggling with insecurities, including celebrities, and Hannah was inundated with support, tips, free products and encouragement as over six million people viewed the diary. 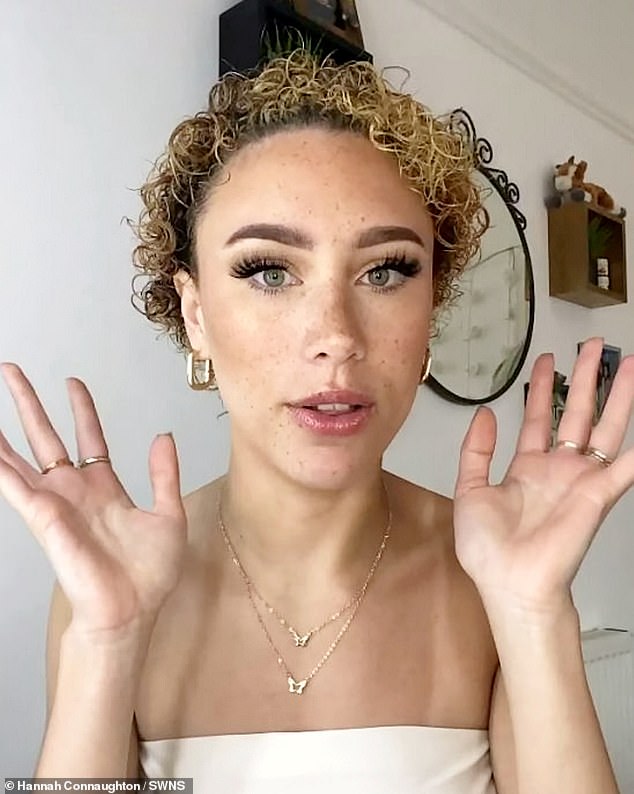 Hannah Connaughton, 21, (pictured most recently) from Stockport, Greater Manchester, has gone viral on TikTok after documenting how she learned to love her curls 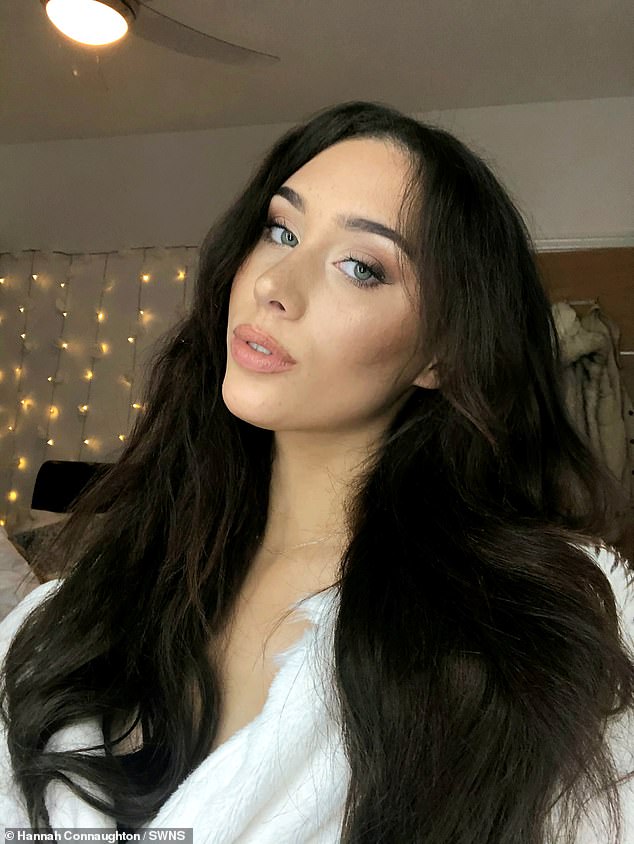 Hannah, who was bullied in school, said she spent years straightening her hair and struggled not to ‘feel ugly’. Pictured: Hannah wearing extensions 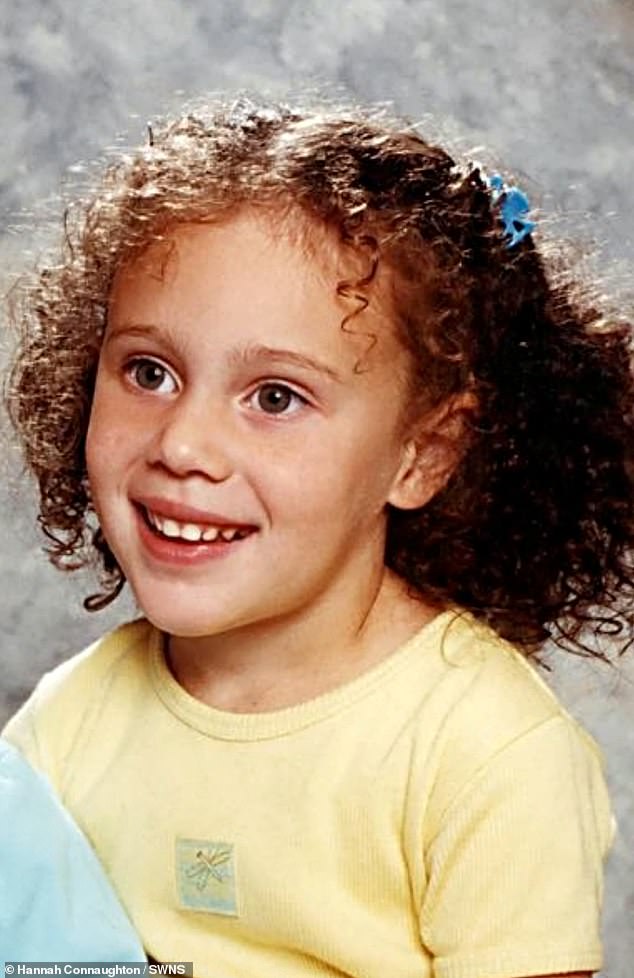 Hannah explained she’s battled insecurities because she’s ‘visually white’ but ‘has an Afro’. Pictured: Hannah as a child

The outpouring gave her the confidence to try stunning wigs and to eventually go to a specialist textured hair salon.

Hannah’s original video posted on April 12 racked up over six million views with many people encouraging her to cut it short – and after initially being hesitant, she finally got the chop.

She described the experience as ‘exciting and liberating’ and says she has since received ‘nothing but support’ after sharing her news with her TikTok followers.

Newly confident Hannah who has a short 100 per cent curly do, is a far cry from her first video, when she struggled to even wear her hair down. 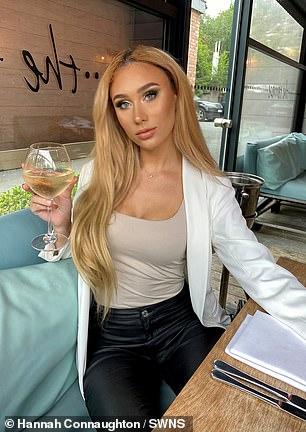 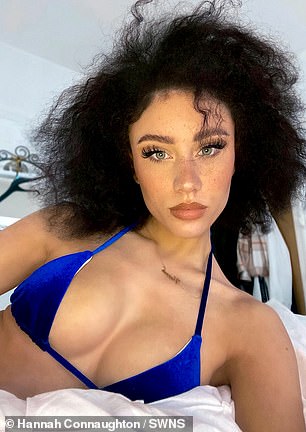 Hannah shared her experience on TikTok in the hopes of receiving advice about good products for her hair. Pictured left: Hannah with extensions, right: Hannah’s blonde Afro 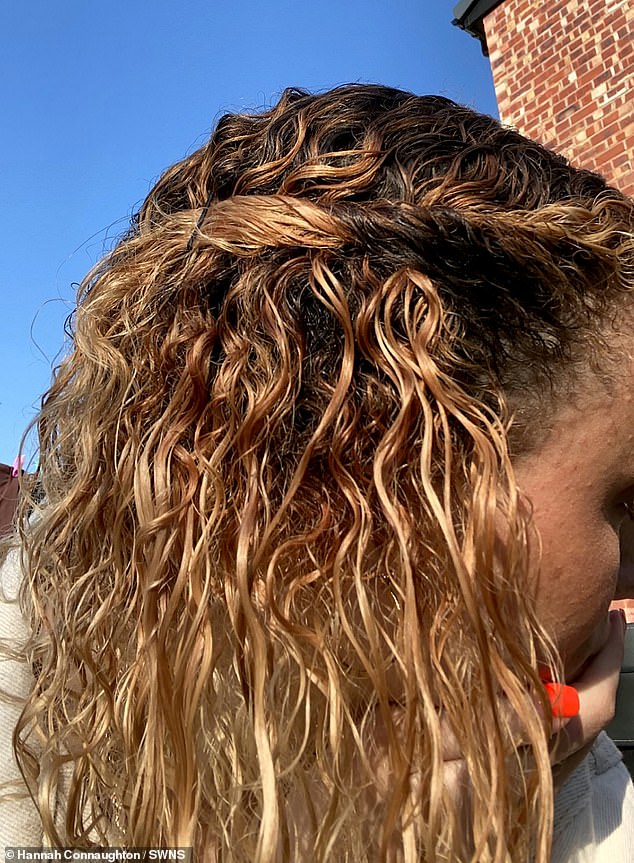 Hannah received a flood of support from around the world, with many people advising her to cut her heat damaged locks. Pictured: Hannah’s Afro

Her collective video diaries of her transformation have clocked up a staggering eight million views.

Hannah said: ‘I have been straightening and bleaching my natural hair or wearing extensions since I was around 14 when I first became self-conscious about it.

‘Because I look white, my hair was one of the only things about my appearance that made me look visually mixed race, so it stood out – people at school would call me a poodle or ask to touch it. 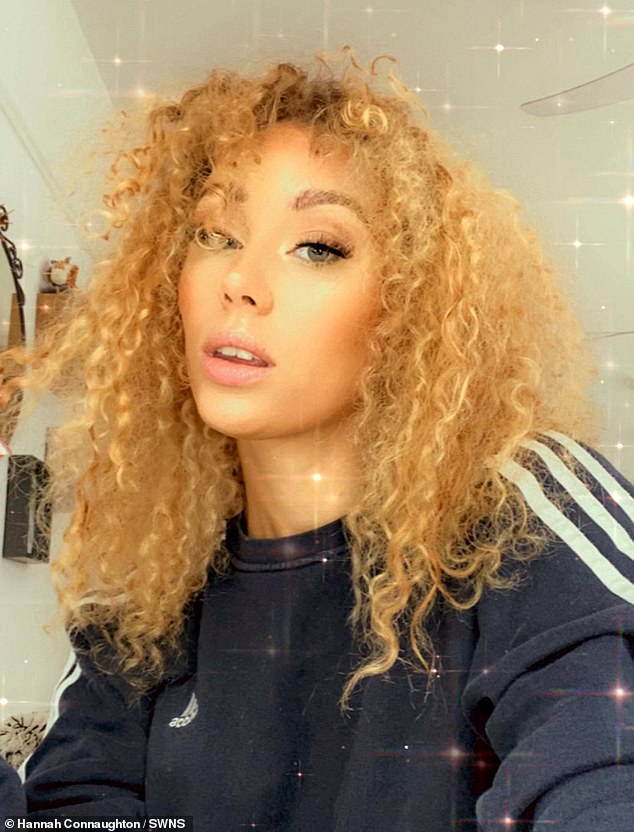 Hannah (pictured) said finally chopping her hair was ‘exciting and liberating’, after straightening and bleaching her hair since the age of 14 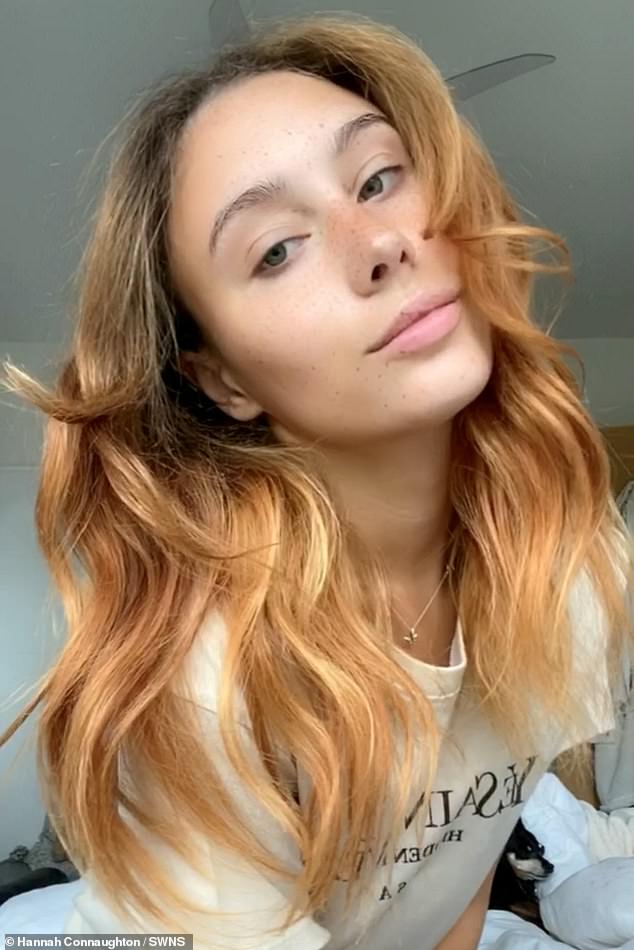 Hannah (pictured) said she realised every mixed and black woman can relate to her experience, after receiving a hair care package from Amber Gill

‘When I asked for advice on TikTok because my hair was so damaged, I was overwhelmed by people’s responses and support – and I realised I’m not alone, and so many other people relate to my story.

‘I even had Amber Gill send me a hair care package because she understood my experience – which made me realise, celebrity or not, every mixed and black woman has experiences like mine.

‘So many people were telling me to cut my hair short to let my curls grow naturally, and eventually I finally plucked up the courage to book an appointment and started to get really excited to see my hair grow long and curly, like it used to be. 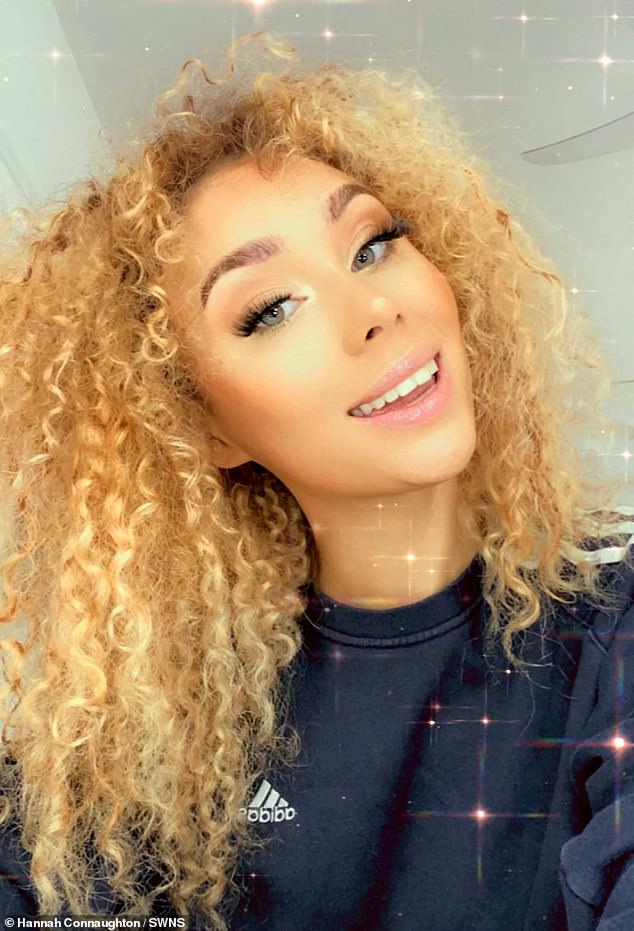 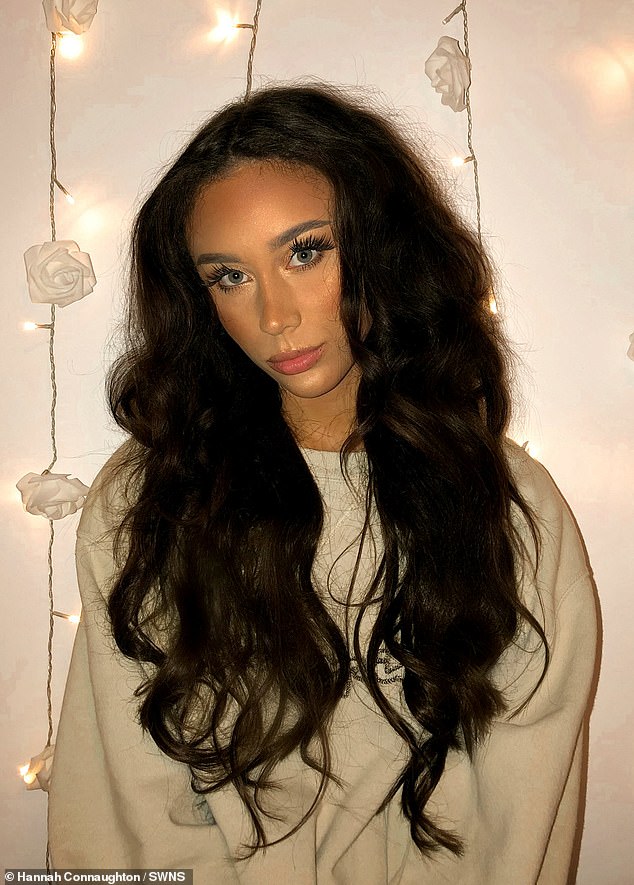 Hannah said she has grown more confident and has found a community that she fits in. Pictured: Hannah wearing extensions 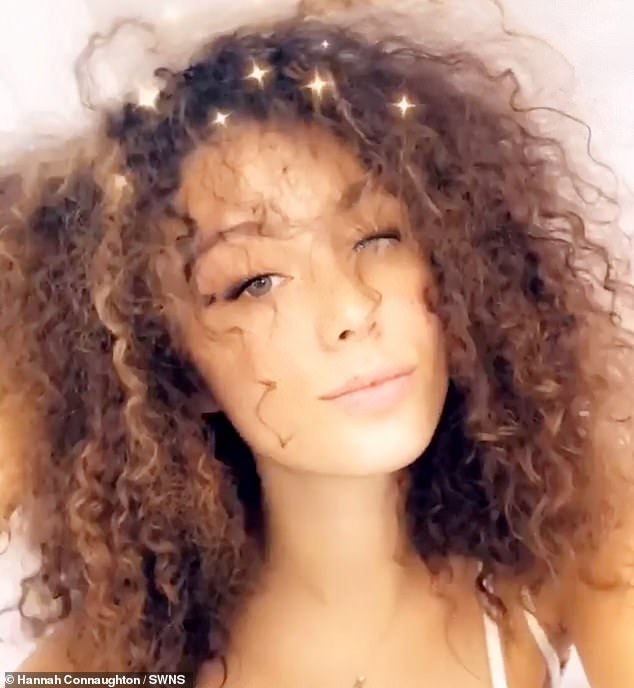 Hannah (pictured) is advising other girls to view their natural hair as beautiful, saying ‘self love is the most empowering thing you can do’

‘I got the chop and I was so nervous, but it was such an exciting and liberating experience and I’ve had nothing but support and people telling me they’re proud I finally did it.’

She continued: ‘Over the past weeks, I’ve grown so much more confident and realised I should embrace who I am – there is a huge community out there of people like me, and I feel like I fit in and belong for the first time.

‘I want any girl that feels the same way I felt to see they’re not alone and their natural hair is beautiful – self love is the most empowering thing you can do, so try to embrace it. 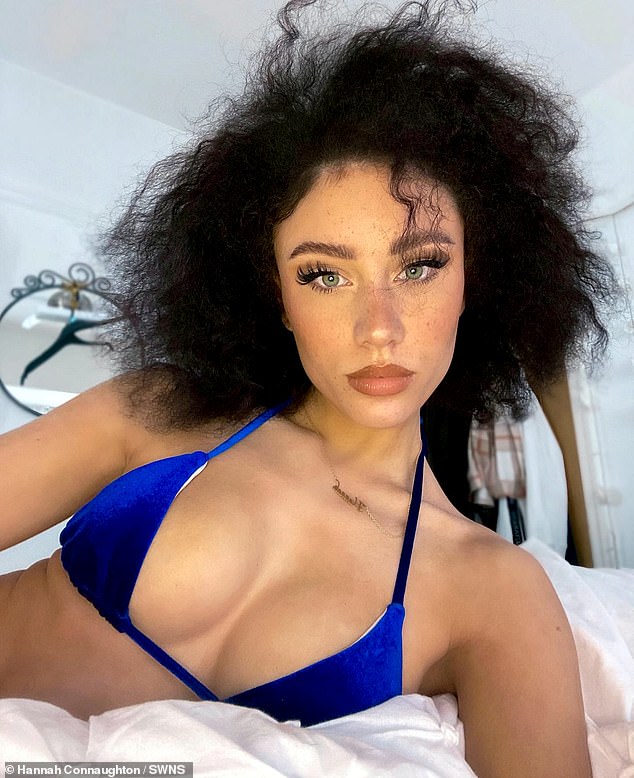 Hannah (pictured) has received support and advice from celebrities including Skai Jakcson, Mahalia and Amber Gill

‘It’s taken 21 years but now I’ve learnt to love that side of myself – and I see that black is beautiful.’

Hannah, whose mother’s family originated from St Kitts in the West Indies, started her hair confessional videos on April 12, and had her hair cut on April 27.

She said years of bleaching and straightening her hair as well as wearing extensions had left her natural curls damaged.

She has been inundated with supportive messages and advice from fellow TikTok users – and even celebrities such as actress Skai Jackson, singer Mahalia and Love Island winner Amber Gill.

Adele Is Expected To Earn $700,000 A Night On Her Exclusive Las Vegas Residency