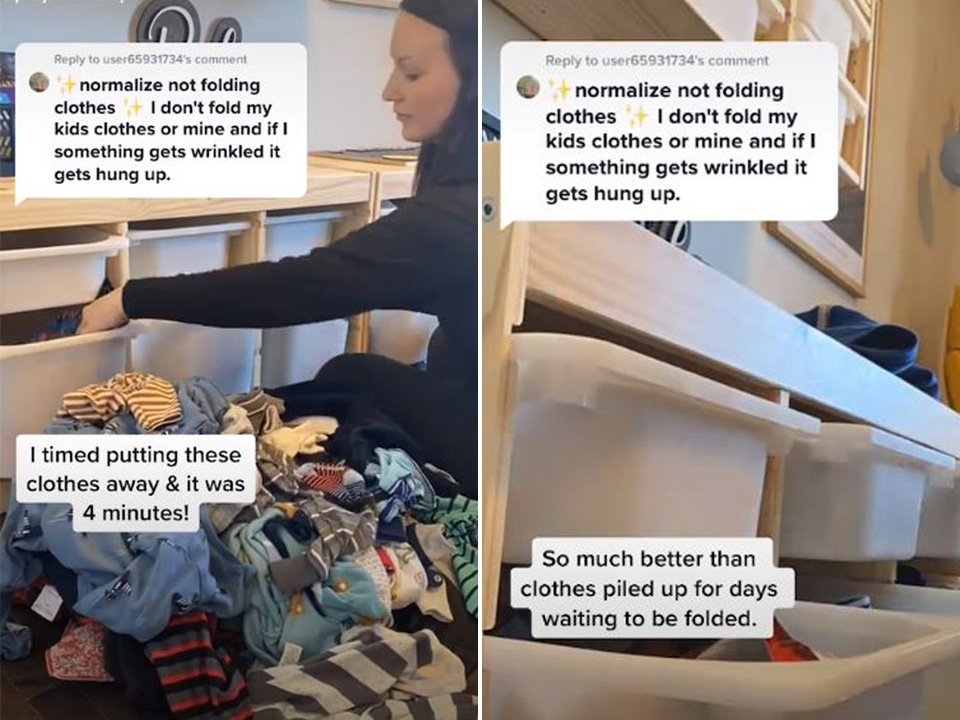 A mum ‘sick of clothes piled up for days waiting to be folded’ has sworn off folding her toddlers’ laundry saying she ‘couldn’t handle it anymore’.

Courtney, who posts on TikTok under the username playroominspo, shared how she now simply puts her one and three-year-old children’s clothes into designated drawers.

She has a large shelving unit full of small bins that pull out, allowing for different types of clothing to have their own drawer.

In one video, she says: ‘Normalise not folding your kids’ clothes. I timed putting these clothes away and it was four minutes.

‘So much better than clothes piled up for days waiting to be folded. I couldn’t handle it anymore.

‘I don’t even pair socks. No fold system for the win.’

The clip shows her sorting through a pile of clothes before cutting to show inside the drawers full of clothes.

Similar storage units retail from under £30, or you could do it with a classic Ikea Kallax shelf.

It’s a hard method to argue with, especially since toddlers don’t generally care too much about whether or not their clothes are a bit wrinkly.

In a previous video sharing the method, Courtney says: ‘So I was sick and tired of having baskets of my kids’ clothes everywhere that weren’t being folded. It was driving me nuts.’

She adds that her ‘no-fold system’ has ‘helped me so so much.’

Below her second video, which has over 116,000 likes so far, Courtney wrote in the comments: ‘A couple wrinkles that smooth out on clothes that get dirty quickly is not worth it to me.

‘If you love folding clothes, do what makes you happy mama!’

Plenty of commenters seem to agree, with one writing: ‘I respect this 100%! A childless friend said it’s toxic how moms try to appear perfect around other moms.

‘Why not relax and do what works?!’

One person wrote: ‘I wash, dry iron, fold and put everything away,’ to which Courtney replied: ‘Be kind to everyone! Everyone has different priorities and different things that make them feel happy and sane.

‘We are all in this together.’