A high school athlete was disqualified from playing at her school’s volleyball game after a referee cited that her hijab violated the rules.

Najah Aqeel, who is a ninth grader at Valor Collegiate Academies, a public charter network based in Nashville, Tennessee, was due to play at an away game for the freshman volleyball team on Tuesday. Right before the start of the game, the referee told Najah and her assistant coach that her hijab violated the rules set by the National Federation of State High School Associations (NFHS), the national body that writes the rules for numerous sports for most high schools across the country, and that she required special permission to play.

Neither Najah nor her coaches knew anything about the requirement. She had already played games wearing the hijab. Angered by the lack of communication and the arbitrary enforcement of the rule, Najah began to cry.

“I was crying, not because I was hurt. I was crying because I was angry. I just thought it was unfair,” Najah told HuffPost. Najah’s mother, Aliya Aqeel, who was present to watch her daughter play, was devastated and tried to get answers.

Najah is not the first Muslim student-athlete to have been disqualified from a high school competition due to the hijab. In 2018, Muslim teen Noor Alexandria Abukaram was disqualified from her race in Ohio after completing her personal best time because officials said her hijab violated the uniform and she needed to have a waiver.

Beyond schools, Muslim athletes in professional leagues have also faced similar challenges due to their hijabs, and many said they felt forced to choose between their faith and their passion for sports. Advocates have since called on both athletic departments and international leagues alike to end singling out Muslims and update what they call antiqued rules that have particularly targeted Muslim women.

A spokesperson for Valor Collegiate Academies told HuffPost that it had no idea the policy existed until that game, and that its other hijab-wearing athletes at the school had never had an issue.

“As an athletic department, we are extremely disappointed that we were not aware of this rule or previously informed of this rule in our 3 years as a TSSAA [Tennessee Secondary School Athletic Association] member school. We are also frustrated that this rule has been selectively enforced as evidenced by the fact that student-athletes have previously competed while wearing hijabs,” said Cameron Hill, the director of Athletics at Valor Collegiate Academies in a statement.

Although the school was able to get a waiver for Najah and future players, Hill called the rule “discriminatory” and “inequitable.”

When asked about the headwear rule, TSSAA, the state-level member of NFHS, told HuffPost it was just following the rules set by the national organization.

“TSSAA has always granted exceptions to any student that wishes to participate with headwear, or other articles of clothing, due to religious reasons,” said Bernard Childress, the executive director of the organization.

“The request in this situation was submitted to our office on Wednesday, September 16, and was approved immediately,” he added. But for Najah, it was too late. She was forced to sit out Tuesday’s game.

Neither the NHFS or the Middle Tennessee Volleyball Association — the administration that supplied the referee — responded to HuffPost’s request for comment. 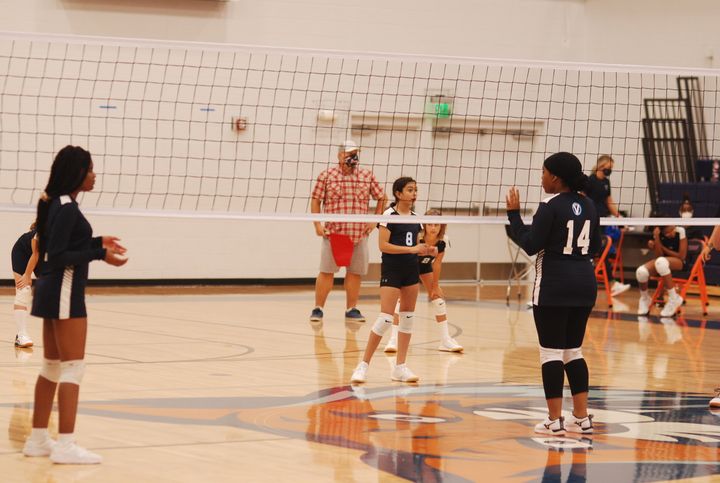 In 2017, the International Basketball Federation overturned its long-criticized ban on religious headwear, including the hijab, after much scrutiny. Following the suit, the International Boxing Association announced earlier this year that Muslim women would also be allowed to compete in a hijab.

Big sports companies are jumping at those changes. That same year, Nike launched its Pro Hijab line. Companies like Adidas and Under Armour followed suit.

But those changes came at a cost. College basketball star Bilqis Abdul-Qaadir was on her way to playing international basketball when her dreams were halted. The International Basketball Federation or FIBA prohibited her from playing with her hijab. The Muslim woman who played for the University of Memphis was forced to give up her dream. She’s since led the campaign for FIBA to change its policy. In 2017, the league finally lifted the ban.

When Abdul-Qaadir heard about Najah’s incident, she was outraged. She said incident brought back traumatic memories for her when she was confronted and humiliated by sports officials because of her hijab.

“The fact this is still going on and young girls have to still make this decision between faith and sport is ridiculous, and it’s time to really put an end to it,” said Abdul-Qaadir. “We need to take these rules out of the way so that more of us can play freely without having to answer to anybody.”

“The fact that I was, in 2004, having to carry a piece of paper around every game that I played, and it’s now 2020. It absolutely makes no sense,” she added.

Shireen Ahmed, a sportswriter who has extensively covered Muslim women in sports, said “policies that require athletes to provide waivers are extremely outdated” and that there was no significant evidence or research that demonstrates that wearing a hijab while playing sports is dangerous.

Schools and athletic associations need to ultimately support and advocate for their athletes against such policies, said Ahmed, adding that putting the onus on athletes like Najah or Noor in Ohio can be detrimental for the player.

“I don’t think there is any need for this policy. It just others Muslim women athletes,” said Ahmed. “High school athletic associations really need to revisit and reexamine what they expect athletes to do in order to compete. These policies don’t reflect the communities they are supposed to represent and it’s unfair to the athletes and to their teams.”

In Ohio, Noor was able to successfully lobby for change. In June, the Ohio Senate passed a bill to allow student religious expression in extracurricular activities. Najah wants the same.

“We want the rule changes. We want the rule thrown out,” Aliya said. “That’s our biggest mission as a family and as a team. So no other girl, not just Muslims, but no other religious groups have to go through what we go through.”

Najah is among approximately 65,000 Muslims in the state of Tennessee. If the rule doesn’t change, advocates say it could discourage other Muslims from participating in sports.

“This just puts unnecessary barriers for people of all religions but for Muslim girls to participate fully in sports. Our state agency should be servicing all their student-athletes and make sure none of them feel discriminated against and there are no barriers to playing sports,” said Sabina Mohyuddin, the executive director at the American Muslim Advisory Council, an advocacy organization that empowers Muslim Americans in Tennessee.

Najah is back on the court and has played twice since the incident. Still, she and her family feel like this is just the beginning over a larger issue from Muslim women in sports.

6 Times Dr. Dre Rose From Tragedy To Maintain His Success