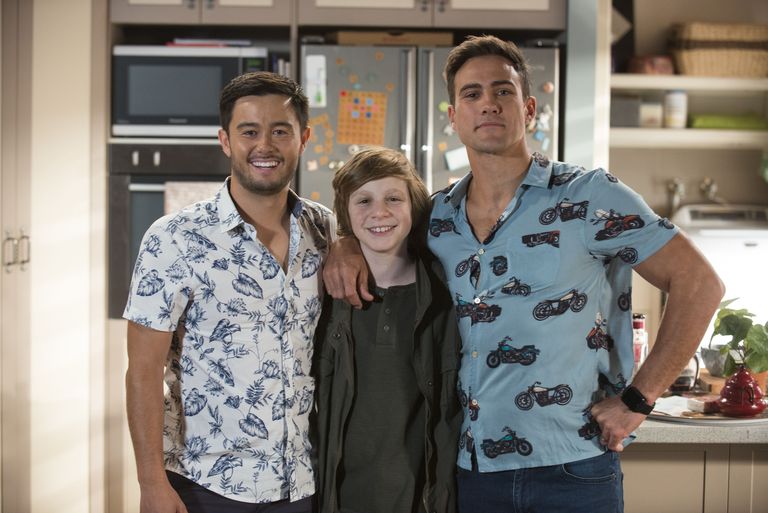 Neighbours couple David and Aaron may feel like they have bitten off more than they can chew with their fostering journey but actor Takaya Honda has assured fans that the much loved pair are determined to do right by Brent and Emmett – even if that leads them onto a rocky road.

Explaining that the outcome the pair have always wanted is to have the troubled lads safe under their roof, Takaya admits that taking on older kids was a culture shock for them both – but they have no regrets.

He told Metro.co.uk: ‘I think like any situation where a child comes along whether that be through having your own child or taking on adoption and fostering like in this case, we all think we know what we are taking on but in reality there are too many variables at play and you just don’t know what’s going to happen when that child arrives, whether they be a foster child or your own baby, and how that’s going to change you or your partner.

‘So no I don’t think they understood what they were getting into, but I don’t think anyone does. I don’t think that they in any way regret or wish that they hadn’t. It’s a challenge that they wanted and in certain aspects it’s been more challenging for them. Starting with a child a little bit older is always going to be a little more complicated.’

And things get even more complicated when it transpires that vulnerable Brett has been sleeping rough, leaving David kicking himself over missing some signs.

Takaya mused: ‘All the fears that David has in general but specifically for Brent and Emmett come to the surface and there’s a certain element of guilt that he feels as Brent was someone that they essentially kicked out of their house, for valid reasons.

‘That doesn’t stop them feeling really sad for him as he’s obviously not had a good hand dealt with in his life and for Emmett’s sake deals himself another bad hand which leads him to sleeping in the streets and sleeping in our shed. So David doesn’t feel good at all about it but works with Aaron to help Brent in any way they can.’

Which leads the pair into a big decision as they opt to take both Emmett and Brent in.

The star explained: ‘They have always wanted them to stay – I think with Brent in such a tough way, it’s kind of a package deal in a lot of ways as David and Aaron know that Brent and Emmett care so much for each other, they’re the only real family that the two of them have ever felt that they have and are able to trust.

Ashley Benson and G-Eazy Fuel Romance Rumors With a Kiss

Crufts 2020: Is there an equivalent Crufts show for cats?