RALEIGH, N.C. — One month after the midterms, a congressional race in North Carolina is still undecided. It could be headed for a do-over amid a widening investigation into possible election fraud.

It was close, but North Carolina Republican Mark Harris was jubilant on election night. Yet the race in the 9th Congressional District could be historical for all the questions it has raised. Among them: Did Harris’ 905-vote win over Democrat Dan McCready rest on fraud? Why, for instance, did a lopsided share of absentee ballots that were counted favor Mr. Harris, while an overwhelming amount of ballots requested but never returned or counted came from areas likely to favor McCready? 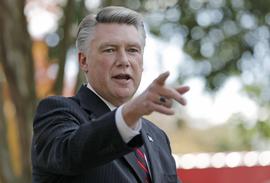 In this Nov. 7, 2018, file photo, Mark Harris speaks to the media during a news conference in Matthews, N.C.

At the center of this is convicted felon L. McCrae Dowless, who was a consultant to the Harris campaign and something of an expert on absentee voting. Wayne Goodwin, North Carolina’s Democratic Party chairman, said residents claim activists went door to door seeking unsigned or unsealed absentee ballots, and then offering to cast the votes on their behalf.

“Several individuals have admitted that McCrae Dowless paid them to harvest these absentee ballots and drop them off to him personally,” Goodwin said.

Led by the president, Republicans nationwide have long cast themselves as victims of voter fraud.

But Dallas Woodhouse, executive director of the state GOP, has gone from claiming this was all a Democratic conspiracy to worrying over the mounting allegations and how they may hurt the party.

“All Republicans across the state are horrified by this. This is against everything that we actively stand for,” he said.

The state Board of Elections has twice declined to certify the outcome in the 9th District and now plans to hold a hearing on it later this month, which means a brand new election may have to be held.

DOMINIC SANDBROOK: Ellwood is a hypocrite harming trust in rule-makers