ABC managing director David Anderson has defended his decision to knock back a Four Corners episode about Prime Minister Scott Morrison’s alleged links to a follower of the QAnon conspiracy theory, saying the program was not ready to be broadcast.

The Sydney Morning Herald and The Age reported on Thursday that Mr Anderson knocked back the episode by prominent journalist Louise Milligan. The decision comes amid escalating tensions between the public broadcaster and the goverment, and just days after Industry Minister Christian Porter dropped defamation action against the ABC and Ms Milligan. 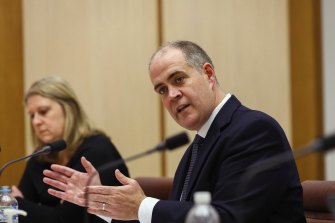 ABC managing director David Anderson said the story was not ready to be broadcast.Credit:Dominic Lorrimer

“On Wednesday I was provided with a link to a ‘rough cut’ of a Four Corners story about the influence of QAnon conspiracy theories in Australian domestic politics which had been endorsed by News management,” Mr Anderson said in a note to staff, seen by The Sydney Morning Herald and The Age.

“Any suggestion that I “pulled” or “blocked” the program is simply not true. I reviewed the material and made an editorial decision it was not yet ready for broadcast, as any responsible Editor-in-Chief would.

Mr Anderson has assured he feedback was encouraging and that he requested more details to strengthen the story.

“My exact words were: ‘Please take on board the feedback and keep going. There is nothing in the program that I can see is time-sensitive. I would like a written response next week addressing the feedback. I know the team have worked on it for a while now, but frankly I would prefer we took our time to make it as strong as possible,’” he said.

“I am absolutely confident of that decision and make no apologies for requiring the highest standards of our published journalism.” A date for episode is not set but could still air at some point in the future provided it meets Mr Anderson’s standards.

Four Corners staff were expecting the episode to run this Monday following weeks of delays, but were informed on Thursday it would not go to air following a decision by Mr Anderson. The episode was referred to Mr Anderson by Mr Morris – a typical practice which occurs with highly sensitive content.

The episode was approved by multiple ABC employees including the corporation’s legal department, editorial policy manager Mark Maley, and its head of investigations, John Lyons. Questions about the episode were put to the Prime Minister’s office on and off over a four week period.

The QAnon conspiracy theory centres on discredited claims about an international paedophile ring involving politicians and celebrities. The Guardian reported in 2019 that a family friend of the Prime Minister is a key follower of the movement. The Age and the Herald have not seen any evidence of a relationship between Mr Morrison and a QAnon supporter and does not suggest that one exists.

The decision to knock back the episode occurred days Mr Porter dropped his defamation action against the ABC on Monday over the reporting of a historical rape allegation. But the settlement deal was followed by an exchange of barbs between the parties as they disputed the details. Mr Porter strenuously denies the allegations.

Mr Anderson is expected to appear before a parliamentary committee next week to discuss the settlement of the defamation case.

The Business Briefing newsletter delivers major stories, exclusive coverage and expert opinion. Sign up to get it every weekday morning.

'Married at First Sight' Spoilers: Did Brett and Olivia Already Split Up?

Missing Your Sun-Kissed Skin? This Bestselling Self-Tanner Is the Answer!