An intensive care nurse has spoken of the heartbreaking moment his ‘goggles filled up with tears’ after he had to decide whose hand to hold between two patients dying from coronavirus.

Tonight’s one-off Channel 4 documentary NHS Heroes: Fighting to Save Our Lives, follows the stories of a collection of frontline NHS workers who filmed themselves at home, with their families, at work and in the quiet moments, to show the nation what they are really going through to keep us alive.

Team leader Luke Sumner, who is in charge of the work and well-being of 20 nurses in Blackpool, explains that with so many people dying alone in his ward at the same time, their families shut out, he had to make the difficult choice about whose hand to hold in their last moments and who to leave.

‘Just a couple of days ago I was torn between two patients and didn’t know which one to sit with as they passed away,’ he explains. ‘One gentleman had family he was in contact with. We managed to connect his daughter up to an iPad, so she could be with him, as such, when he passed away.’

Elsewhere, Kiran Rahim, a pediatrician who works in a hospital in East London, speaks of feeling like she ‘failed’ after a colleague she was treating in ICU sadly lost his battle. 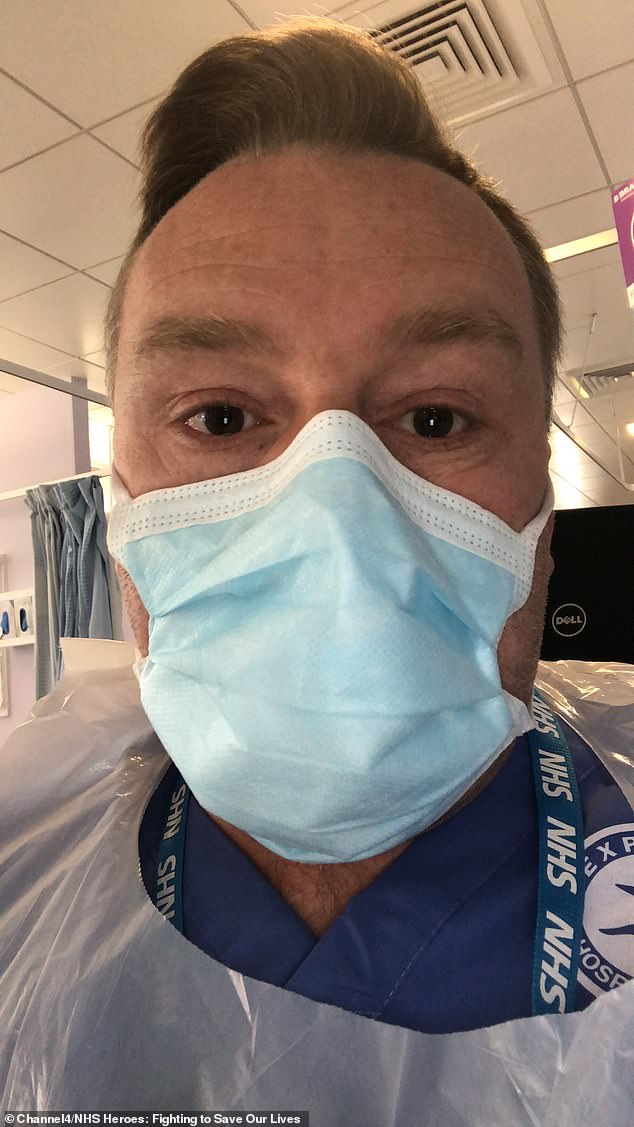 Luke Sumner (pictured at work), who is in charge of work and well-being of 20 nurses in Blackpool, speaks of the heartbreaking moment he had to choose whose hand to hold between two patients who were dying from coronavirus in NHS Heroes: Fighting to Save Our Lives 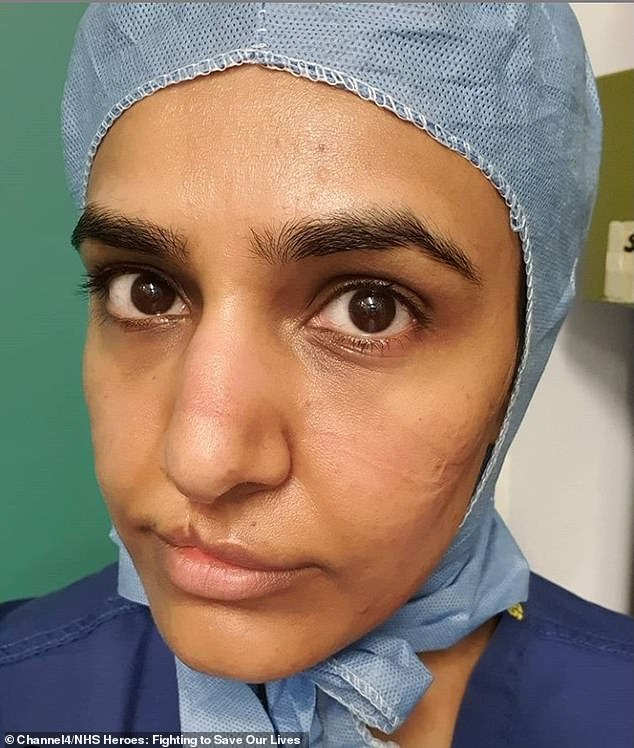 Kiran Rahim (pictured), a pediatrician who works in a hospital in East London, speaks of treating a colleague in ICU, who sadly didn’t make it

With coronavirus rapidly spreading around the UK, the number of deaths have more than doubled in one week.

‘I don’t want anyone to ever be left completely alone when they pass away,’ says Luke. ‘We pride ourselves on giving end of life care. It’s a privilege to be in that position, but when there’s no family there whatsoever, I’m just going to try my best to make sure the patient is at peace.’

Speaking of the moment he had to make the unbelievably tough choice, Luke explains: ‘Inbetween curtains I was sat at one gentleman’s bed with no relatives whatsoever holding his hand.

‘So I decided to tell him how peaceful everything has become. I just said there are no cars on the road. I was telling him how much nicer the world is now.’ 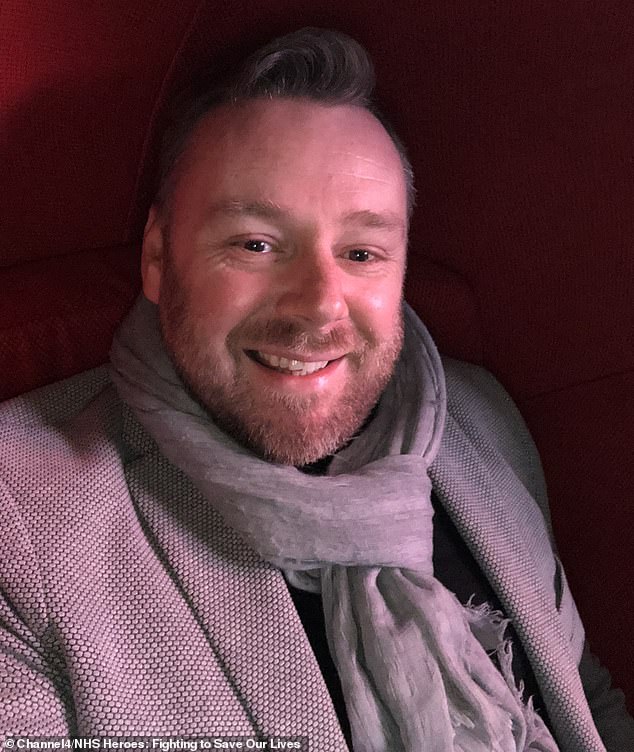 Luke (pictured) explains that when there is no family there whatsoever, he just tries his best to make sure the patient is at peace 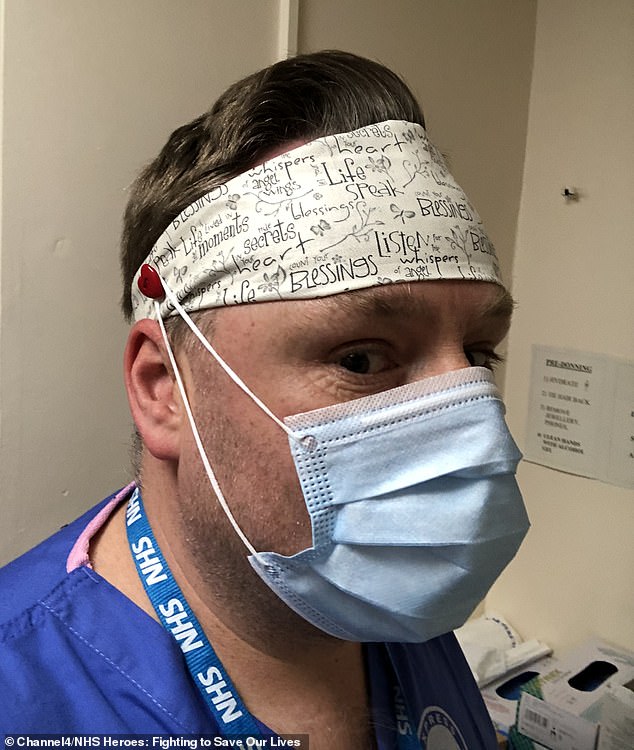 Luke continues: ‘Through the curtains all I can hear is this gentleman’s daughter saying: “It’s alright dad, you’re going to be up in heaven with mum again soon. She’s there waiting for you.”

‘I pretty much filled my goggles with tears. I actually broke down because it dawned on me how many lives we’re going to lose from this.

‘It’s upsetting to think about any relative dying, but when you see family members in this situation, it’s absolutely heartbreaking.’

Meanwhile, Kiran, who is working on the COVID-19 ward in East London, reveals she is also facing up to devastation caused by the disease. 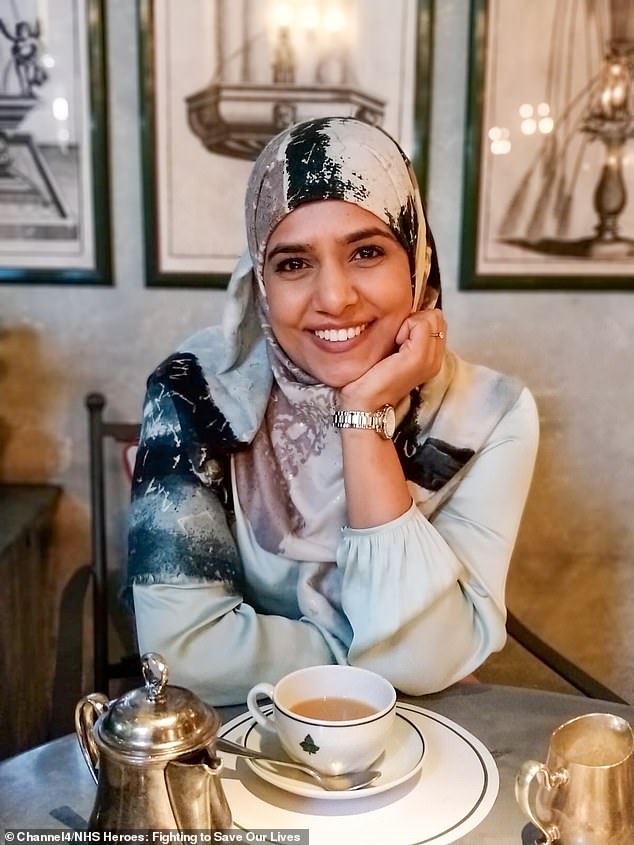 ‘I am a pediatrician so don’t deal with death on a daily basis, but on ICU that’s what it’s been,’ she says. ‘It’s been death every single day and it takes its toll on you.’

‘I’ve just finished a 12 hour shift on ICU. It’s been a tough day. Its been gruelling. We’ve flipped about nine patients and put them on their fronts as a last resort to try and get some oxygen into their lungs.

‘The last gentleman really hasn’t tolerated it and we all feel really deflated – he’s just not oxygenating very well. He’s one of our nursing colleagues. He’s probably not going to make it. It just feels really s***.’

Kiran goes on to explain how the team at her hospital have lost so many of their colleagues.

‘This is in memory of all the staff members we’ve lost here in the hospital I’m working at. Two of them were quite big people I’d worked with – one was a gentleman I cared for. It was really sad. The hospital have very kindly done memory books for all of the staff members.’

NHS HEROES: FIGHTING TO SAVE OUR LIVES – Wednesday 6th May, 9pm on Channel 4

Children's Books That Celebrate Black History, to Read All Year Round