FITNESS watches have dominated the wearables market for years, but is that about to change? NURVV has created running insoles to shake up the market – and we've put them to the test.

If you've ever wondered why you measure data about steps from your wrist and not your feet, then these running insoles will be right up your street. Read our full NURVV review below. 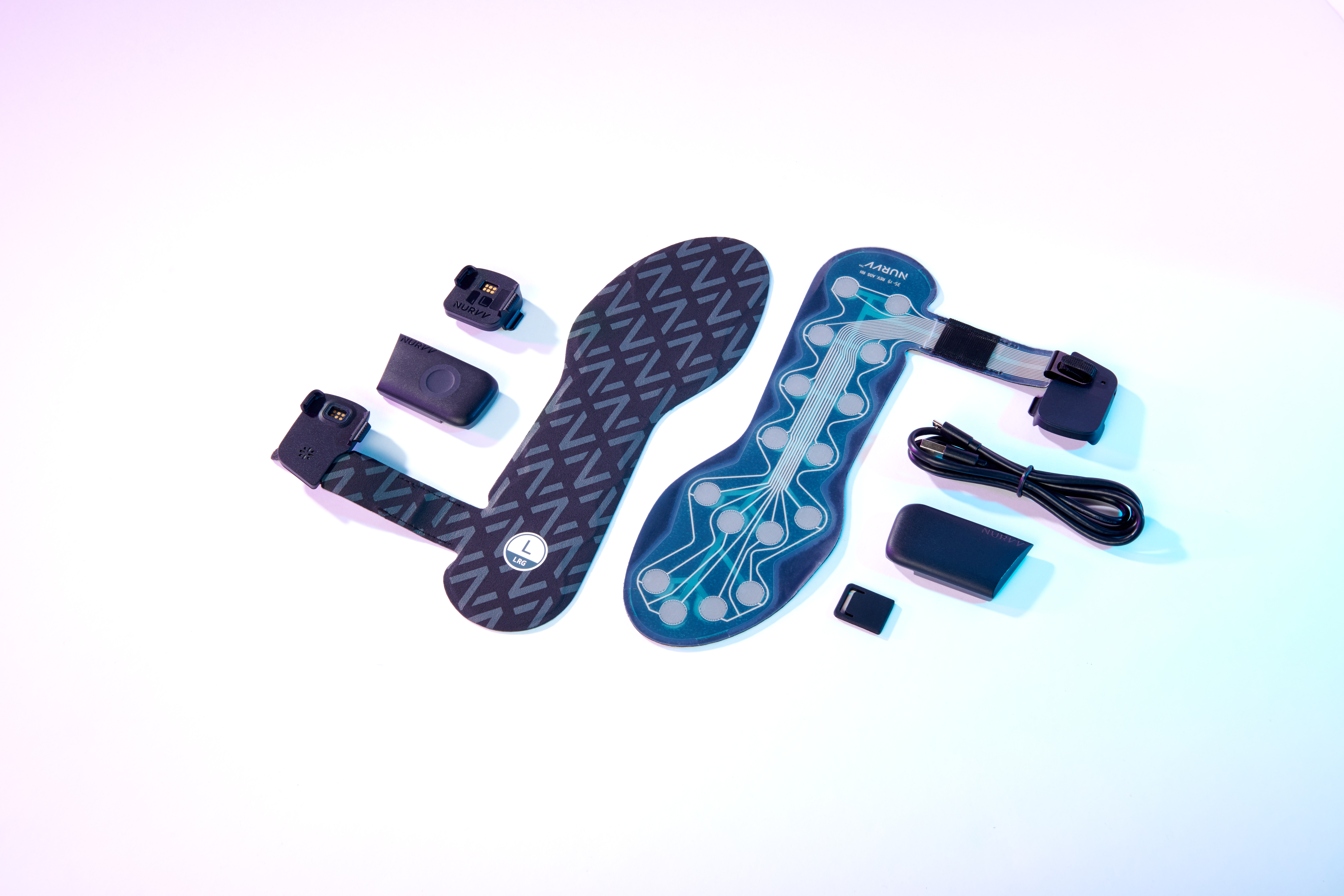 In the simplest terms, NURVV Run is a "smartwatch" for your feet. It's a combination of insoles and trackers that are designed to provide feedback on your runs to help improve your speed, technique and reduce the risk of injury.

Each insole has 16 sensors that measure various metrics 1000 times-per-second. They provide data that a typical fitness watch would such as distance, time and elevation, as well as more niche data such as pronation, footstrike and balance. 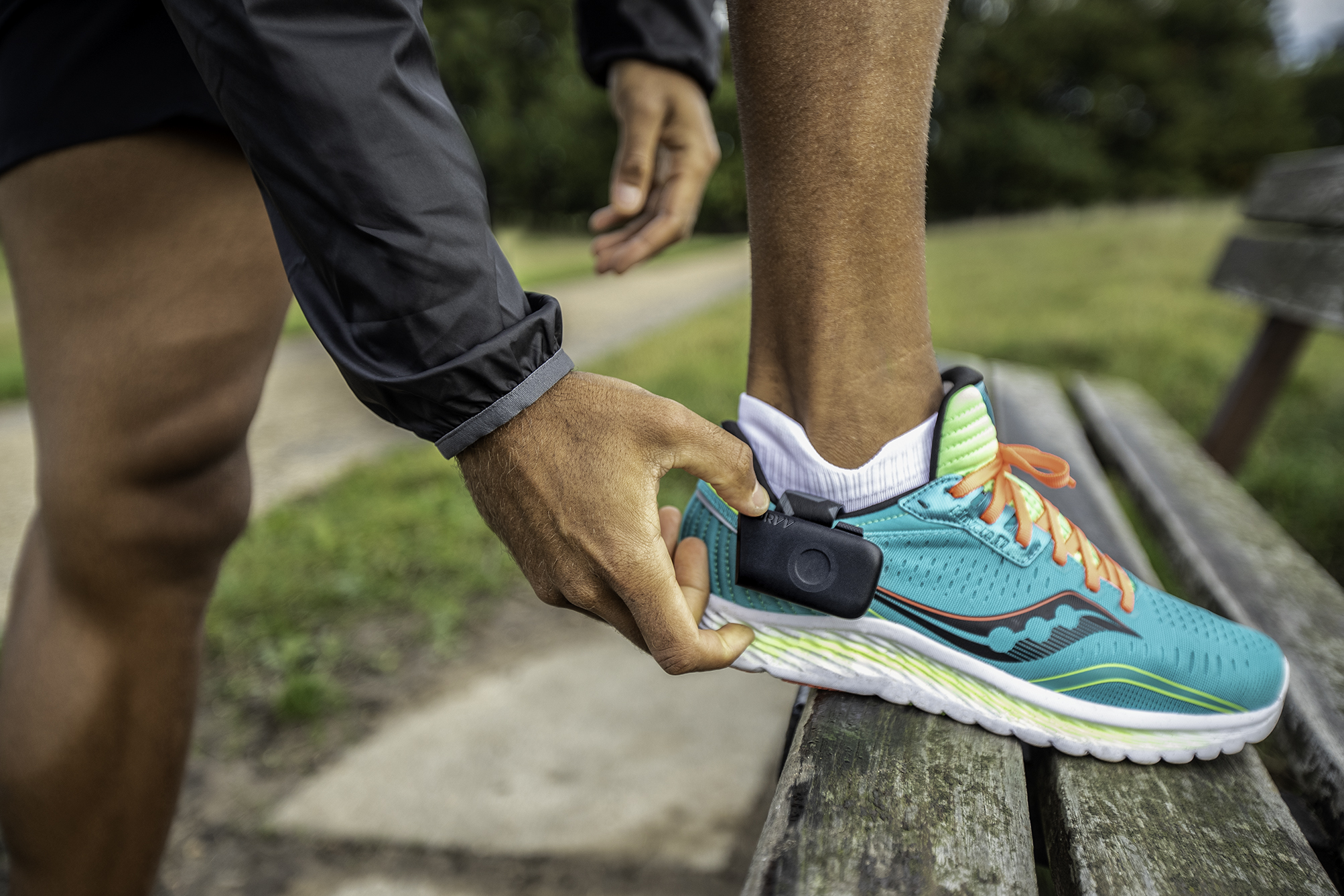 As relatively new runners, we were pretty excited to see whether NURVV could help us to improve our technique and (the real reason for our excitement) improve our speed.

We tested out the NURVV Run insoles for a month, taking them out running at least three times a week. By the end of the month, we felt more aware of our form, were driven to keep on top of our training and we'd shaved 15 seconds off our kilometer split – making our 5km time over a whole minute faster.

The insoles, trackers and app all have a sleek and simple design. They're easy to set up and use, and one of the largest perks is that they provide unique data to fitness watches, such as pronation, footstrike and step length.

However, we found that some of the common data (such as cadence, pace and elevation) to be less detailed than some fitness watches. Additionally, we found the tracker's GPS to be slightly off compared to three other devices we tested it against – usually by a couple of hundred metres.

The price of the insoles is also quite high – though we can understand why as this type of tech isn't cheap and with NURVV being pioneering in this area. Therefore, unless you're specifically interested in learning more about your technique and delving into data about your feet, you might be better off opting for a more affordable fitness watch.

Overall, we really enjoyed testing the NURVV Run insoles. The tech is unique and impressive, and the data can help prevent injury, which we're all for.

We'd recommend purchasing the insoles to complement your current fitness watch, rather than replace it.But we think it's a great bit of kit for those keen to improve their technique, reduce the risk of injury and pick up their pace.

For a bit of background, we only really started running around a year ago. We were previously more drawn to spin bikes in the gym, but when lockdown hit we turned to running to keep fit and we'd now say we've been converted or have "caught the running bug".

As amateur runners, we were somewhat unaware of what we needed to do to improve our form and performance. Therefore, when we were offered the chance to review NURVV, we thought it would be an excellent opportunity to learn more about these aspects of our running. 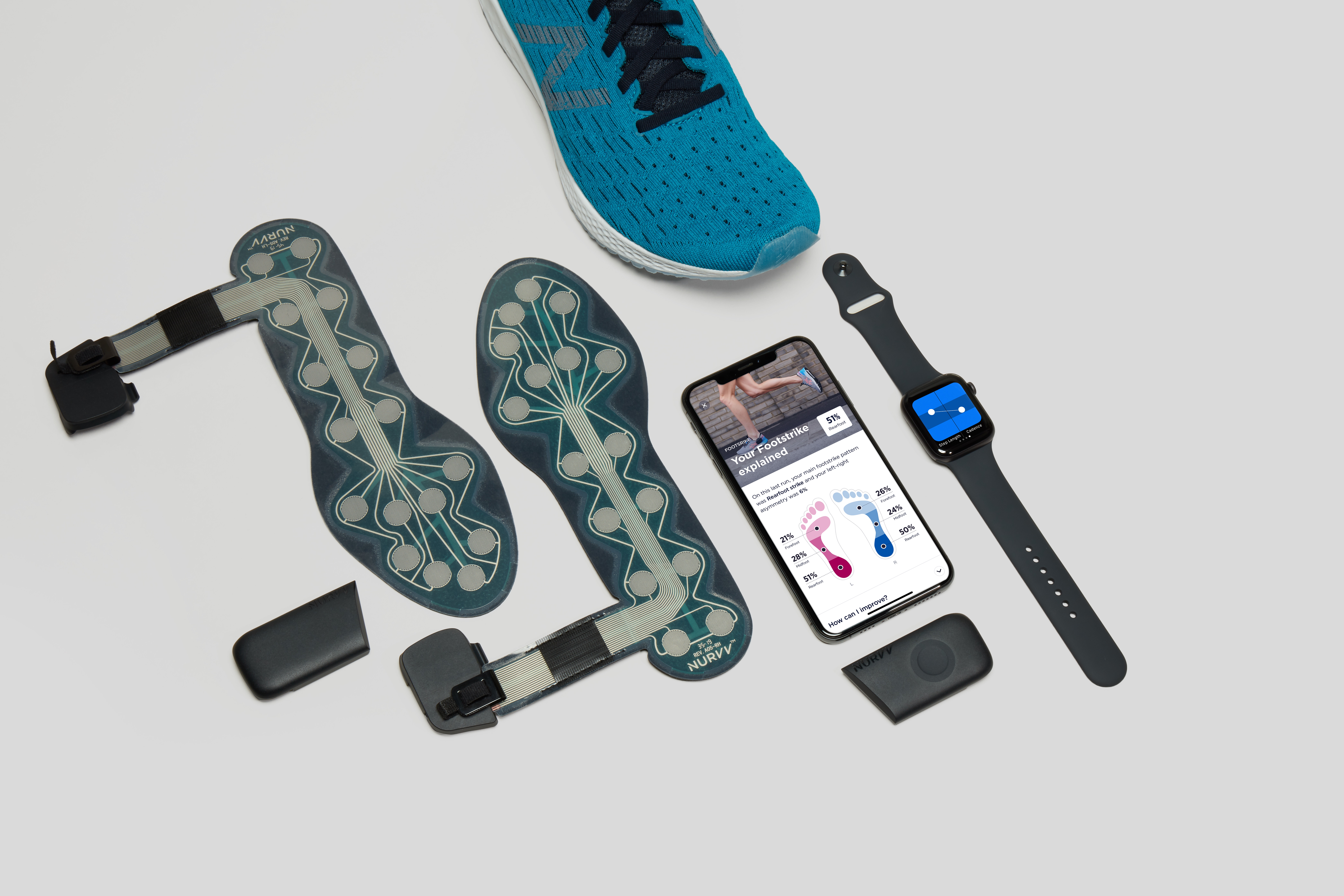 When you first unbox your NURVV, you'll find two insoles, two trackers, the charger and some clips. We recommend charging the trackers before you get started.

The insoles and trackers are uncomplicated and intuitive to set up. It took us around 5 minutes from unboxing to be run-ready. You can read NURVV's full start-up guide here.

We noticed a few reviewers stating that they couldn't feel the insoles once they were inside the shoe, but this wasn't the case for us. We were certainly aware they were there, but fortunately, they weren't uncomfortable or distracting.

The wall of our shoes are really thin, and so we used the extra clip provided to secure the trackers in place. We also spotted some reviews saying that the trackers rubbed against their ankle, but again, we didn't personally experience this.

It's not super easy to remove the trackers from the casings or the charger. They'll seem pretty stiff at first but once you've successfully removed them once or twice you'll get the hang of it.

There's not a lot to the trackers. There are two small on/off buttons on the underside, some status lights on the top, and then a large start/stop button on the outside which can be used to manually start runs if you're not taking your phone with you.

Whilst the trackers and insoles do most of the work, you'll spend more of your time looking at data on the NURVV Run app than playing around with the trackers. 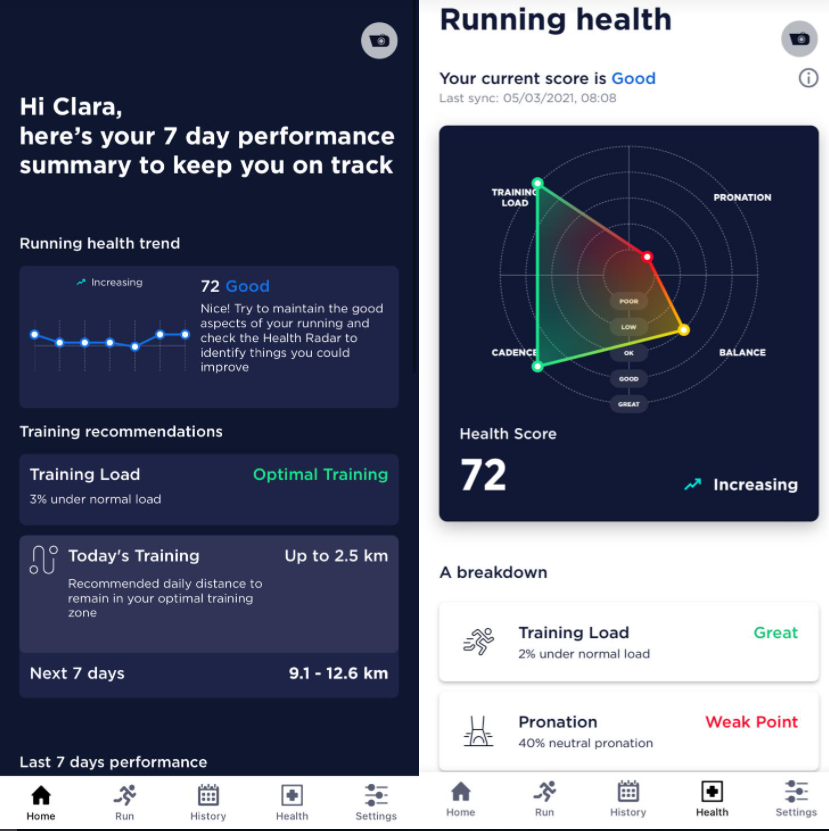 The NURVV Run app is free to download from Google Play or the App Store. It can be used to manage your runs and view data and is intuitive to use. Here are our thoughts on some of the main features and functions.

After our first run, NURVV highlighted that we had an overpronation issue with our left foot. Having previously experienced some pain after running, we weren't surprised by this finding and actually felt gratified that our suspicions had been confirmed.

NURVV recommended that we change our running shoes immediately, and suggested some exercises to help correct overpronation, which we carried out a couple of times a week. We changed our running shoes which (somewhat bizarrely) ended up rectifying the overpronation on our left foot but making it worse in our right foot.

We found it useful to be able to track our pronation over time, and the differences between shoes. We'll definitely be using NURVV to help us find some running shoes which improve our overpronation issues in the future.

The Balance feature looks at your cadence, step length, pronation and footstrike and the (dis)similarities between your left and right leg.

According to NURVV, our biggest issue in this area was an imbalance with our Footstrike. Our left foot heavily favoured a midfoot strike, whereas our right had a more even split between the midfoot and rearfoot. In order to improve this, NURVV recommended we try to "run softer". We've seen mild improvements so far, but we expect this to take time.

Our cadence was one of the only areas of our running health which was consistently rated as "great", and therefore we spent less time focussing on this aspect of our running.

NURVV tells you how many steps per minute you take on average and gives you an expected cadence based on runners that are similar to you. And like the other health areas, NURVV will provide you with recommendations on how to make improvements – in our case this was to focus on our step length. 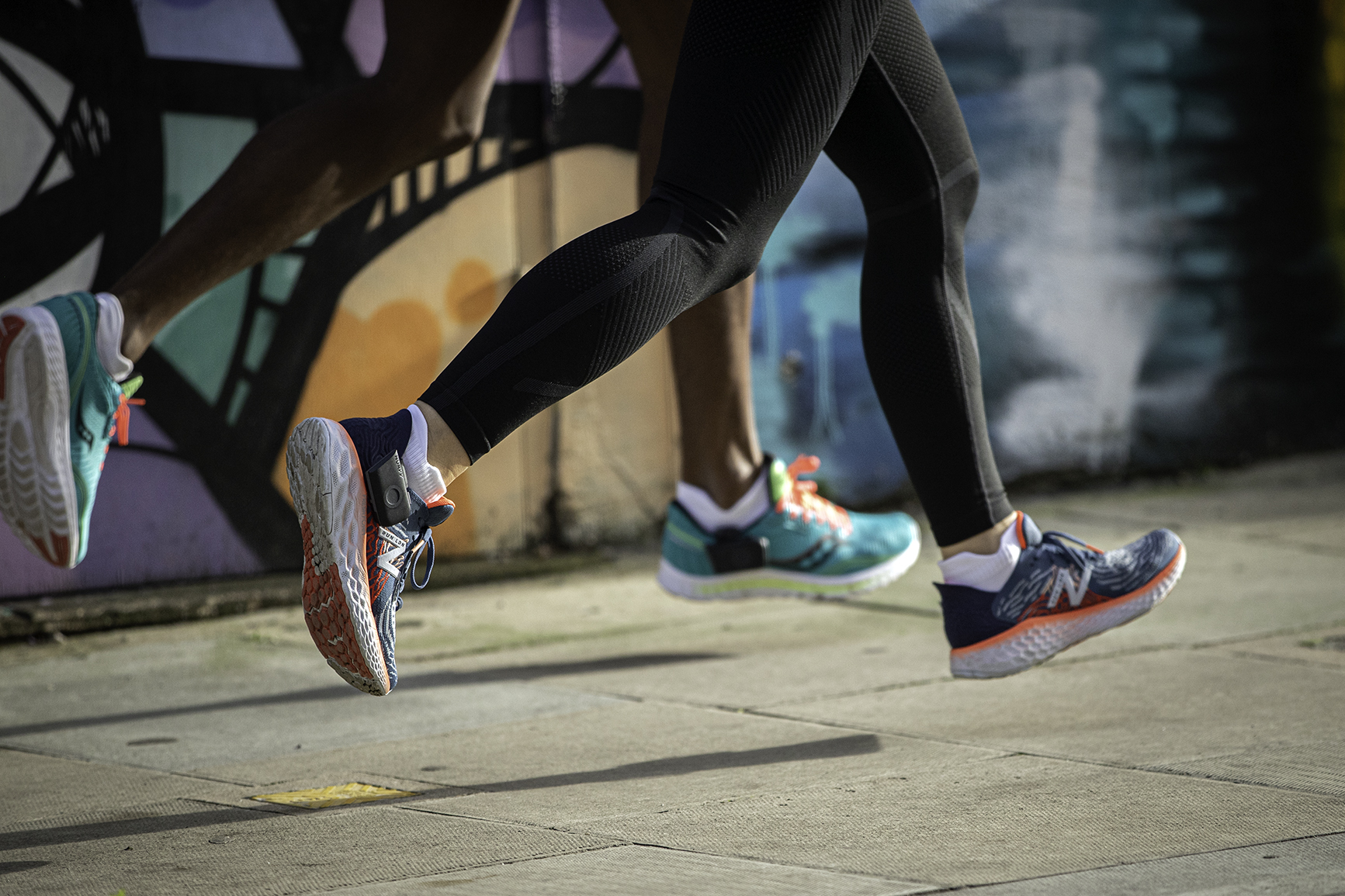 When you set up your NURVV Run app you can set your average weekly run distance. The app will then make recommendations on how far you should run over the coming days to maintain your fitness and reduce the risk of injury.

We really liked this function as we felt like we were being held accountable to keep on top of our training. As soon as our training load dropped below "optimal" we felt the need to schedule in a run. We also enjoyed the guilt-free days off, when the app recommended we take some time to recover.

The Pace Coach function is designed to help you to increase (or decrease) your speed for a certain distance.

To use this function, you'll need to select a base run from your run history and then set your target performance. The Pace Coach will then notify you when you need to adjust your cadence or stride length to meet your target.

We weren't the biggest fans of this function, possibly because we're not experienced enough runners to be able to maintain a certain cadence or stride length. And therefore we were continually being told to adjust the way we ran and found it both offputting and demotivating.

However, we'd imagine that runners with more experience or those more in tune with their stride length would find this function beneficial.

In order to sync your heart rate data, you'll need to make sure you have an ANT+ compatible device. Note: Some standard smartwatch brands will have HR data but not be ANT+ compatible, such as Fitbit and some Apple Watches.

We tested out the HR function by syncing our NURVV insoles with our Wahoo Elemnt Rival watch. This provided a new set of data and graphs (within the app) for us to dig into including bpm, time spent in different HR zones, and HR + Pace data.

During our runs, we would also get voice notifications to let us know which HR zone we were currently in. We found this to be motivating and felt the need to pick up the pace and push ourselves harder whenever our HR dropped.

How much do NURVV Insoles cost? 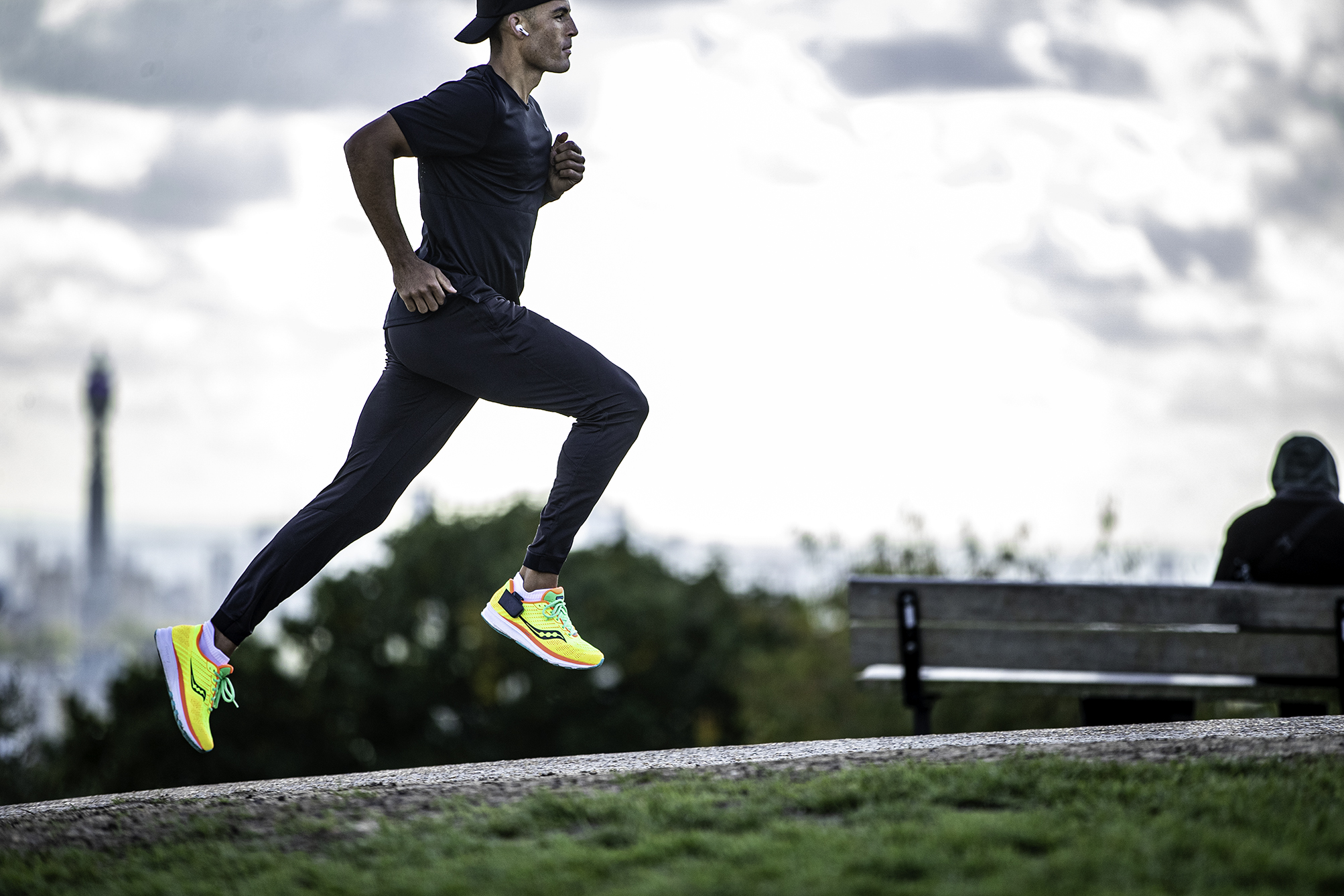 A pair of NURVV running insoles cost £249.99, and the price doesn't change depending on the size you require.

Where to buy NURVV Run?

NURVV Run Insoles are currently available to purchase from several online retailers, including:

We really enjoyed testing the NURVV Run insoles, and feel they helped us not only improve our pace but also become more aware of our form.

It also gave us a visual understanding of how our trainers were impacting our balance and pronation, which was really insightful and data that is totally unique to this product. We'd be tempted to take our NURVV insoles with us next time we go shopping for running trainers, to ensure we get a pair that support us in the right ways.

An added (and unexpected) bonus was that the Training Load recommendation motivated us to keep on top of our training, as we felt like we were being held accountable.

We were hoping that after a month of use we'd have made more significant improvements in the Pronation and Balance categories, however, it seems as though these things may take a little time to improve.

Overall, we're a fan of the NURVV insoles. They are simple to use and the data is clear. And although we can't validate the data, it seems to be accurate (bar the GPS tracking). At this point, they won't be replacing our fitness watch, but we think they're a brilliant additional data resource.

We'd recommend them for amateur runners like ourselves, who are keen to improve their technique and increase their run distance and/or pace. We also think more experienced runners would find value in the unique data provided, whether that be the balance, pronation or footstrike data.

Looking for a new spin bike? We recently tested out the Echelon EX-3, see what we thought of it here.

For more fitness reviews and roundups, check out the Sun Selects Health and Fitness section.

Photo reveal: A $34 million San Francisco mansion billed as a 'wellness home' has a sauna, yoga studio, and filtration system that changes all the air in the house every 2 hours. Take a look inside.