Ms Palaszczuk, who earlier promised she would not go to any events while in Tokyo to deliver Brisbane’s final pitch for the 2032 Olympic Games, was ordered to attend the event on Friday night in an unprompted rebuke during a press conference. 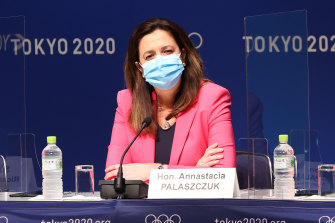 Mr Coates insisted to the Premier: “You are going to the opening ceremony.

“I am still the deputy chair of the candidature leadership group.

“And so far as I understand, there will be an opening and a closing ceremony in 2032, and all of you have got to get along there and understand the traditional parts of that, what’s involved in an opening ceremony.

“So none of you are staying and hiding in your rooms, all right?”

Awkwardly, Ms Palaszczuk replied: “I don’t want to offend anybody, so…”

Mr Coates continued, “You’ve never been to an opening ceremony have you?” to which the Premier shook her head.

“You don’t know the protocols, I think it’s a very important lesson for everyone here,” he said.

“Opening ceremonies cost in the order of $75 million to $100 million, it’s a major exercise for any organising committee… It’s my very strong recommendation that the Premier and the lord mayor and the minister be there and understand it.”

On breakfast TV this morning, Ms Palaszczuk repeated that she was not going to “offend anyone”, indicating her position was softening on accepting the VIP invitation to Friday night’s event.

“I’m certainly not going to offend John Coates, nor am I going to offend (International Olympic Committee president) Thomas Bach, who’s just awarded us the Olympics and I’ll leave that to them, but there is an expectation now that all three of us attend,” she told Today.

The Premier told ABC Radio Brisbane that Mr Coates was “laying down the law” and “I’m just going to do what John Coates said”.

Federal Sports Minister Richard Colbeck confirmed he would be at the opening ceremony.

“In my view, we’ve just been awarded the biggest sporting event on the planet, [and] my view, being here I should attend the opening ceremony – so I will be,” he said.

On Wednesday night, Brisbane was declared the host city for the 2032 Olympic Games, making it the third time the global event has been held in Australia.

– with Daniella White and Jocelyn Garcia

See the surreal scenes from Disney World’s reopening after lockdown