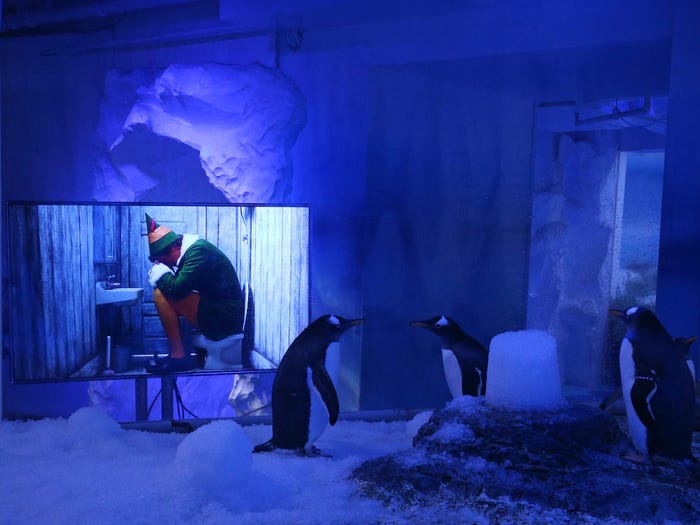 Like so many of us, the penguins at the Sea Life London Aquarium are getting into the holiday spirit by watching Christmas movies.

As the aquarium's Gentoo penguins await the arrival of visitors, they've filled the past few weeks by watching holiday classics, like "Elf."

In November, a TV was placed in front of the penguin's enclosure giving them a full view of holiday films.

According to a statement from the aquarium, "Elf" has been the penguins' favorite film.

"It's great to see how much our Gentoo Penguins are enjoying the Christmas movies we've put on for them," Leah Pettitt, an aquarist at the aquarium, said in a statement.

Without visitors, the movies are helping the penguins stay entertained

The aquarium has been closed for a month during London's second lockdown, so the aquarists strategized ways to keep the penguins entertained. One strategy was watching movies.

"We are always looking for new and innovative ways to keep all our creatures entertained and engaged," Pettitt said in the statement. "This year has presented more challenges than most, so we've had to get creative."

Experts at zoos and aquariums are constantly designing games and activities for animal enrichment, according to various zoo websites. They report that this enrichment stimulates, encourages, and challenges their minds and keeps animals' natural instincts sharp.

For penguins in enclosures, enrichment is one way to help them engage in beneficial, natural behaviors.

In one study from 1995, researchers found that animal enrichment could improve health, like reproductive success or increased inclusive fitness. The same study notes that a common shortcoming of animal enrichment is when it has little function relevance, like listening to music or playing with toys.

A 2006 study found that an enriching environment decreases animals' stereotypic behavior, which are repetitive and functionless actions, like pacing or overgrooming.

By watching Will Ferrel dressed as an elf, the penguins engage in one of the five forms of animal enrichment.

And it's not just the penguins at the London Aquarium enjoying Will Ferrell's acting. Gentoo penguins in Sea Life aquariums across the UK have watched films and TV shows to stay entertained.

Throughout lockdowns across the world, aquariums brainstormed new enrichment strategies for their animals

Earlier this year, penguins were spotted frolicking through The Nelson-Atkins Museum of Art in Kansas City, Missouri.

When the England-wide lockdown comes to an end this week, the Gentoo penguins will be met once more with smiling faces from long-awaited visitors.

Aquariums in places entering or enduring new lockdowns may take a cue from the Sea Life London Aquarium.

Meet the models trading in for a younger man, writes ALISON BOSHOFF