Labor senator Penny Wong has said she will not “return anger with anger” over the death of Kimberley Kitching in a parliamentary tribute to the late senator this morning.

Senator Wong, the opposition’s leader in the upper house, acknowledged talk surrounding Labor’s internal politics – in which she had been mentioned – following claims Senator Kitching had been bullied and shunned in the lead-up to her death from a heart attack. 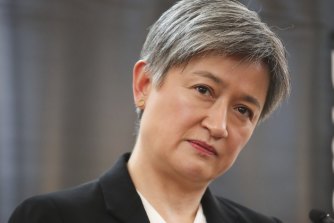 Senator Penny Wong has given a condolence speech about the death of Senator Kimberley Kitching.Credit:Alex Ellinghausen

“Much has been said and written in the days since Senator Kitching’s passing,” Senator Wong said.

“Many are hurting and many are grieving. I understand that grief and loss can be so profound that it can provoke anger and blame.”

Senator Wong, as well as senators Kristina Keneally and Katy Gallagher, issued a joint statement earlier this month denying they had bullied Senator Kitching after claims were aired in the media.

“I’ve made my views very clear outside this place about some of that misplaced anger and blame. I will not return anger with anger, or blame with blame,” Senator Wong said on Monday morning.

“Senator Kimberly Kitching deserves her life and legacy to be celebrated and remembered.”