A light plane overloaded with cocaine and bound for Australia crashed soon after taking off in Papua New Guinea, exposing a Melbourne-based criminal syndicate with alleged links to Italian organised crime.

The Australian Federal Police have charged five men – four from Melbourne – with conspiring to import more than 500 kilograms of cocaine with an estimated value of $80 million, from PNG into Australia.

Police allege the syndicate arranged for a Cessna light plane to fly from Mareeba, near Cairns in north Queensland, to PNG to collect the drugs last Sunday. 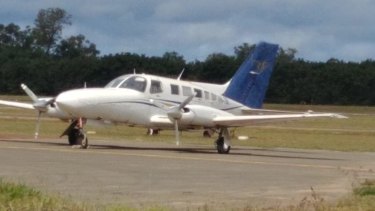 The Cessna light plane, before it crashed in PNG. Credit:AFP

The pilot went out of his way to avoid detection, flying at around 3000 feet from Mareeba to PNG so the plane would not show up on radars, police said.

"These flights are dangerous for other aircraft as well as those on board, in addition to being illegal and unauthorised," police said in a statement.

The plane made it to PNG, but the Cessna, said to be bursting with cocaine, crashed while attempting to take-off from a remote airstrip at Papa Lea Lea, north of Port Moresby. 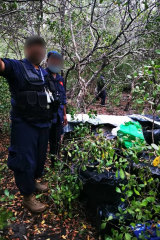 Police found what they believe was cocaine hidden away in PNG after a plane crash. Credit:AFP

"The AFP alleges greed played a significant part in the syndicate’s activities and cannot rule out that the weight of the cocaine had an impact on the planes ability to take off," police said.

Authorities in PNG found the plane empty when they were alerted to the crash, but two days later on July 28 the Australian pilot turned up at the Australian consulate in PNG and he was arrested.

Late on Friday, the Royal Papua New Guinea Constabulary and the AFP found 28 bags containing what investigators believe is 500 kilograms of cocaine.

But a wave of arrests had already occurred back in Australia, with police revealing they have been investigating the alleged syndicate, which they claim has links to Italian organised crime, for two years.

A 31-year-old from Hoppers Crossing, who police allege was supposed to transport the drugs in a truck from Queensland, was also arrested Atherton and charged with attempting to possess border controlled drugs 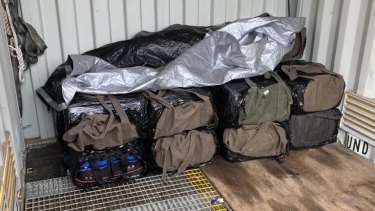 Bags of what police allege were full of cocaine were seized.Credit:AFP

Two men, a 33-year-old Niddrie man and a 61-year-old Melbourne man, were arrested in Melbourne on July 27 and have been charged with conspiring to import a commercial quantity of drugs. They face an extradition hearing in the Melbourne Magistrates Court on August 10.

Property and financial assets, including three homes, shares, account funds, and a motor vehicle, with a combined value of $3.5 million have been seized.

AFP Deputy Commissioner Ian McCartney said the arrests were the resolution of an almost two-year operation. 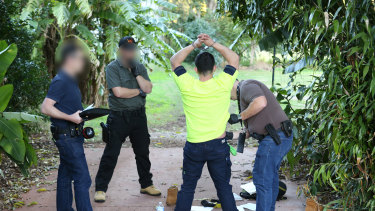 Police arrest one of their suspects in Atherton, QLD. Credit:AFP

"With current interstate travel restrictions in place due to COVID-19, the attempt to import illicit drugs into Australia shows how opportunistic and greedy organised crime can be," Mr McCartney said.

"This outcome has only been possible due to the incredible cooperation we’ve had between law enforcement agencies who were all committed to a single goal, which was to dismantle this syndicate," she said.