Scott Morrison this week more or less trashed Australia’s top advisory body on immunisation, in remarks that were at best ill-judged and at worst alarming.

On Wednesday Morrison told a news conference he (or the government) made a “constant appeal” to the Australian Technical Advisory Group on Immunisation (ATAGI) to review its advice on AstraZeneca according to the balance of risk. 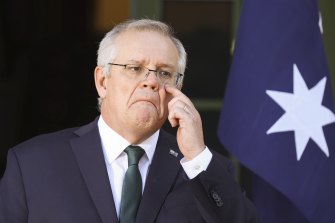 Prime Minister Scott Morrison at The Lodge on Wednesday.Credit:Alex Ellinghausen

On Thursday he said on radio: “I’ve just simply said balance of risk is changing, guys, so how is that impacting on your advice, and it’s time to think about that”.

The “guys” (and girls) on ATAGI are obviously as aware as anyone of the changing risk profile as cases increase.

Indeed ATAGI has already altered its advice on AstraZeneca in light of the Sydney outbreak. On July 13 it said where there was an outbreak and the Pfizer supply was constrained, people under 60 without immediate access to Pfizer should “reassess the benefits to them and their contacts from being vaccinated with COVID-19 Vaccine AstraZeneca, versus the rare risk of a serious side effect”.

ATAGI, whose members have qualifications in immunisation and infectious diseases, is charged with advising the health minister on immunisation issues.

There’s no doubt its advice on AstraZeneca has been very cautious. It threw a spanner in the vaccination works when it said that Pfizer (of which Australia doesn’t yet have enough) was preferred for those under 50, and then raised the age to under 60.

This was based on the very small risk of blood clots, which are more likely to occur in younger people. Two more recent deaths associating AZ and clots were announced by the Therapeutic Goods Administration on Thursday – the people were in their 40s.

Whether ATAGI is right or wrong in its caution is disputed.

But it is not the only expert source in Australia taking this position. A paper by the Kirby Institute’s Raina MacIntyre and other authors published in this month’s issue of the international journal Vaccine reported their “risk-benefit analysis for Australians aged 18–59”, comparing the risk of AZ vaccination with the risk of COVID infection.

The authors concluded: “In Australia, the potential risks of the AZD1222 vaccine in younger adults, who are at low risk of dying from COVID-19, may outweigh the benefits”.

The article also said: “The latest policy decision to avoid use of this vaccine in adults < 60 years in Australia is entirely consistent with past vaccine risk–benefit policy decisions when rare but serious adverse events were identified”.

The authors say their analysis, done after the death of a 48-year-old woman, was “shared with senior health officials in Australia on April 8, 2021″. That was the same day ATAGI advised against AZ for under 50s, with the government announcing this at a hastily-called night news conference.

It’s up to the government whether it accepts whatever ATAGI says – as ATAGI’s remit indicates, it only “advises”.

Certainly we know ATAGI’s advice (and the debate it prompted) contributed to vaccine hesitancy including among those for whom AZ is most appropriate – older people – and this is very unfortunate.

It would be legitimate – if difficult and some would say irresponsible – for Morrison at any point to say he thought ATAGI wrong, that other advisers were telling him something else, and so the government rejected ATAGI’s advice.

But what he – a leader with his back against the wall because of the Pfizer shortage and the rollout shambles – should not do is try to lean on a supposedly independent expert group to change its advice.

The PM’s aim seemed obvious. If ATAGI was pliable, he could say, “this is the new health advice – everyone should follow it”. He would have the best of all worlds.

Or perhaps not. If and when ATAGI changes its advice from now on – even if the PM’s view has nothing to do with that change – will it have the same credibility? Won’t many people, already suspicious and cynical, think: that’s just ATAGI giving into political pressure?

If the perception of ATAGI’s independence is going to be undermined, the usefulness of the body – whatever it says – becomes questionable.

At his Thursday news conference, Morrison tried to re-spin his pressure on ATAGI. He completely respected its advice, he said. “That’s why we’ve followed the advice of ATAGI. It’s my job as prime minister not just to simply accept advice uncritically. Whether it’s sitting in cabinet meetings or in other forums, of course I challenge the advice that I receive. I ask questions. I drill into it. You would expect me to do that. I think Australians would not expect me to just take this advice simply on the face of it.”

Actually, on numerous occasions, the government has made a virtue of just accepting health advice without question.

In the Australian Financial Review two economists, Ashley Craig and Matthew Lilley, have criticised ATAGI for not building into its recommendations social benefits versus risks.

They write: “ask yourself whether ATAGI made the right call by refusing to properly account for social benefits in its advice, which encouraged millions of Australians to delay vaccination”.

“It is not too late to change this message. With millions stuck in lockdowns, ATAGI could instead be emphasising how accelerating vaccinations will make society better off.”

This, however, seems wrong-headed. ATAGI is a narrow, specialist vaccination advisory body. You wouldn’t ask Treasury to assess the effectiveness of Pfizer against AstraZeneca. ATAGI’s advice is part of a wider picture, which government has the job of bringing together into one frame.

The ATAGI episode is just the latest chapter in the evolving story of the role of health experts in this pandemic.

Early on, their status was substantially unquestioned. Morrison and other leaders constantly referred and deferred to them.

But then health officials especially at state level became controversial figures, accused of being political.

Although the federal bureaucrats have not been targets in the same way as state officials, there has been a growing perception their advice is influenced by the political needs of their masters.

This makes it all the more important that independent advisory groups like ATAGI are not perceived as having a political tinge.

As Morrison struggled with what he was saying, or not saying, about ATAGI, on Thursday he did what he hates doing, to get the media off his back on another front.

He had been under pressure for earlier refusing to say “sorry” for the rollout problems – he’d resisted the word, preferring to say he took responsibility.

But at Thursday’s news conference he said: “I’m certainly sorry that we haven’t been able to achieve the marks that we had hoped for at the beginning of this year. Of course I am.”

He had decided, or been persuaded, that the “sorry” question wouldn’t go away without being dealt with. It might be harder to put the ATAGI questions to rest.

Michelle Grattan is professorial fellow at the University of Canberra. This article was first published on The Conversation.

She Went Through Menopause At 24. Now, She’s Raising Awareness Around IVF.

Prince Harry speaks about the 'challenges' of finding resilience'