Little prince charming! One-year-old Charles of Luxembourg delights staff and residents as he joins his parents on an official visit to local care homes

The adorable Prince Charles of Luxembourg has stolen the show once again as he accompanied his parents on a royal engagement.

The royal baby joined his parents to tour a number of care homes around the country and appeared to charm residents of the home, who got to play with him and even feed him his lunch.

The adorable pictures of some of the visits were shared on the Grand Ducal Court’s Instagram account. 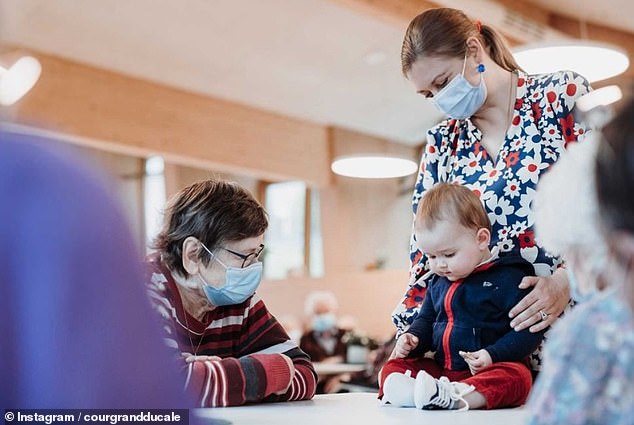 Prince Charles of Luxembourg, 13 months, accompanied his parents during a series of visits to care homes around his country, pictured 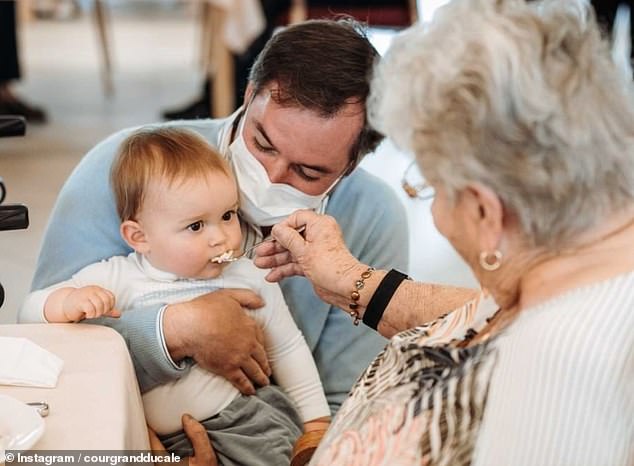 Hereditary Grand Duke Guillaume, 39, held his son while a resident kindly fed him his lunch during one of the visits

In the snaps a beaming Stephanie could be seen wearing a face mask as she introduced the tiny prince to residents staying in homes around Luxembourg.

In one image, Charles, can be seen being fed his lunch by an elderly lady as his doting father Guillaume looks on.

The royal couple were not afraid to let Charles down on the floor and crawl his way among the residents, stopping to meet some of them or asking to get in their arms.

In one snap, the royal baby, wearing white and blue romper, can be seen extending his arm to an elderly man waving a toy car. 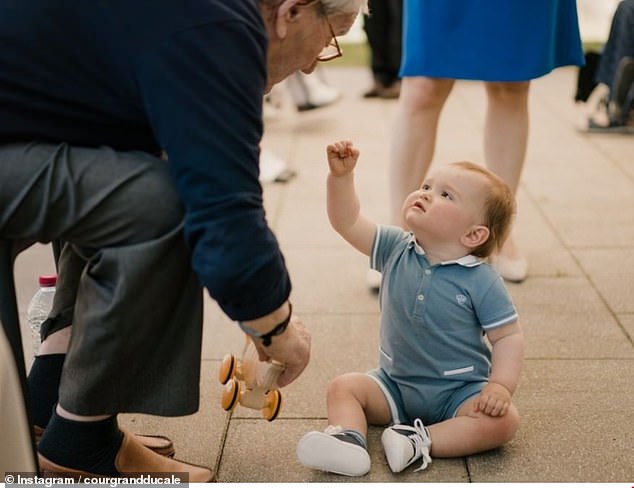 Down to earth royal! Prince Charles, wearing a white and blue romper, extends his arms to an elderly man playing with a toy car 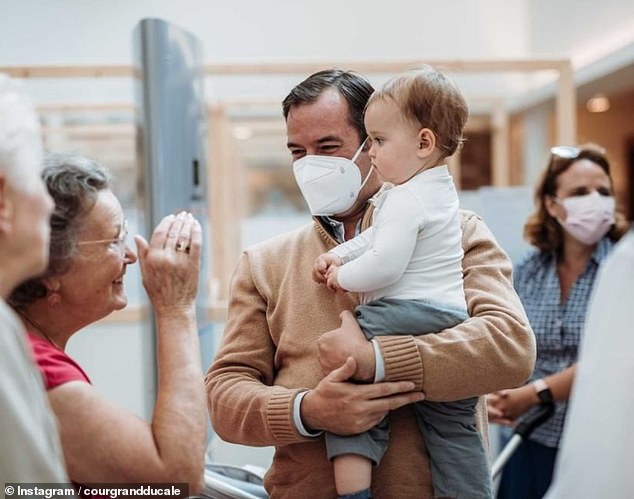 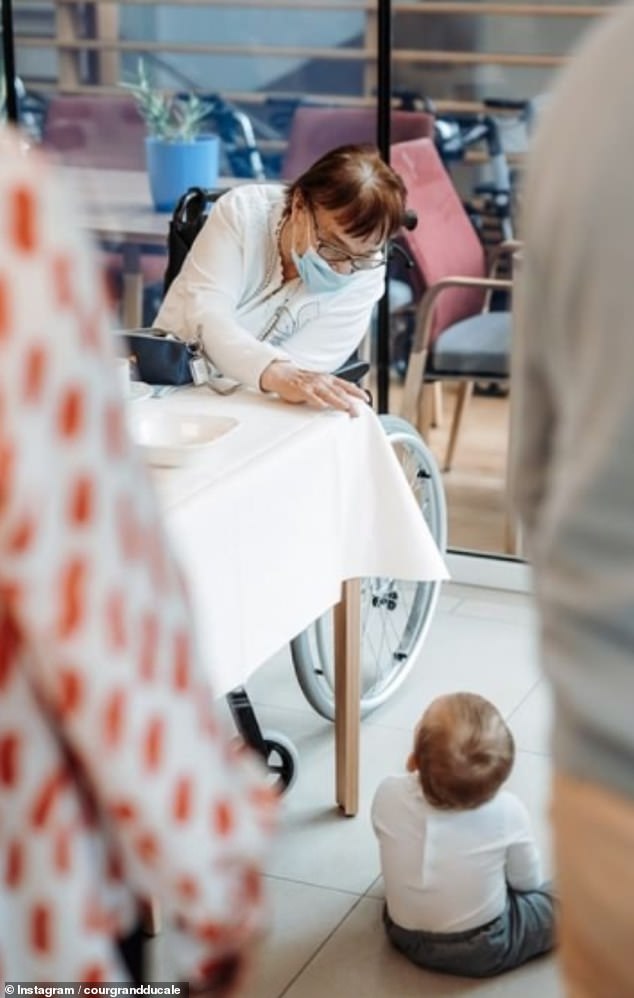 Hello there! A resident was delighted to find the Tiny Prince sat by her table when she looked down during lunch

In each picture, Charles could be seen sporting different outfits, but the same navy blue shoes, which are monogrammed with his name.

One day he arrived at the hospital dressed in a white t-shirt with long sleeves and grey trousers, while another he donned a navy blue jumper with red trousers.

While the young royal charmed residents, the royal couple also took the time to speak to them one-on-one, inquiring about their health and their time at the home they were visiting.

They also met with the care home staff, who’ve been working relentlessly during the pandemic. 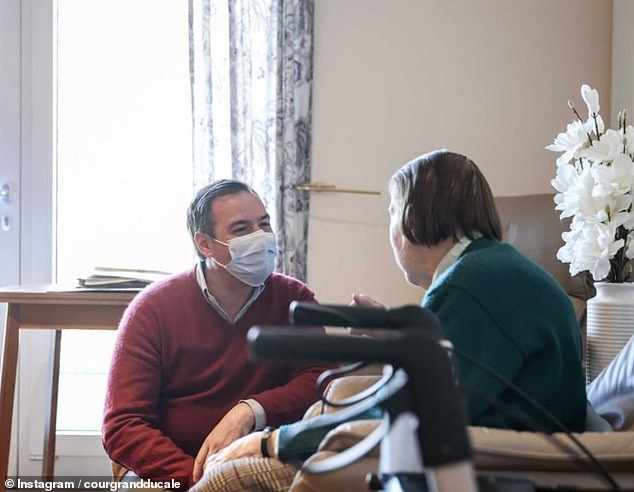 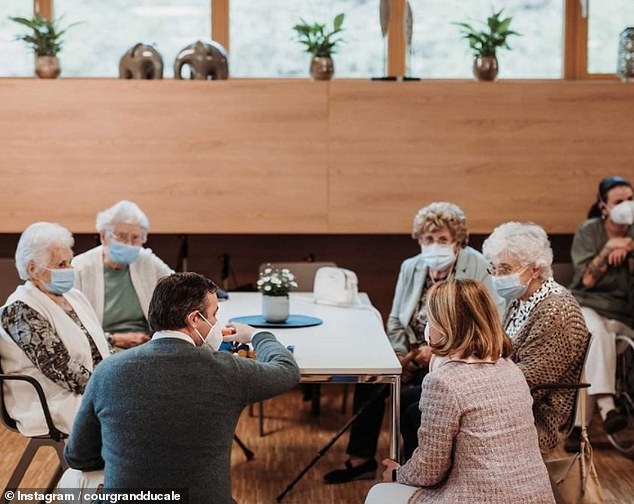 The royal sat down with some residents, who have been struggling with feelings of isolation due to the coronavirus pandemic 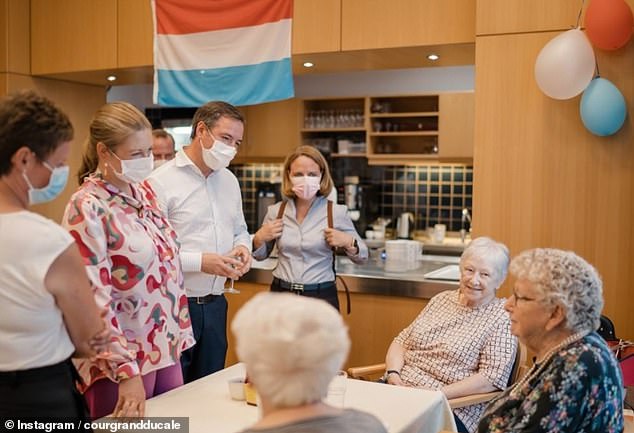 Hereditary Grand Duchess Stephanie, wearing a colourful top with an original design, accompanied her husband in meeting with both staff and residents of the care homes

‘In the last few weeks, the hereditary couple, Prince Charles and Mrs Corinne Cahen, Minister for Families, have taken the initiative to tour care homes in Luxembourg to meet and inquire about the well-being of the elderly, who often feel isolated and fragile due to the coronavirus pandemic,’ the family’s Instagram account read.

‘At each of their visit, the Prince and Princess have expressed their gratitude to the care centres’ staff for their willing effort in maintaining a warm atmosphere for the residents, all throughout the crisis.

‘Throughout his cheerful and playful nature, the Little Prince has also brought much joy to the elderly during their interactions,’ the message went on.

‘These beautiful moment and rich emotions can be seen in this photo series, we will share more images on Friday.’

Charles was born in May 2020 at the height of the coronavirus pandemic, and has become a fixture of the Grand Ducal Court’s Instagram account.

‘Floribama Shore’: Nilsa & Gus Reveal If It Was Awkward To Live Together Amidst Her Pregnancy