Prince Charles has revealed how his grandmother Queen Elizabeth, the Queen Mother, inspired his love of music.

The Prince of Wales, 71, also admitted that he was thrilled to be asked to pick out several pieces to play at Prince William’s wedding to Kate in 2011.

Prince Charles said he first became aware of the ‘inspirational’ performing arts when attending the Bolshoi Ballet’s The Fountain of Bakhchisarai in 1956.

Describing it as an unforgettable experience, the young prince attended the Covent Garden-based performance with his grandmother.

Speaking in an interview with Alan Titchmarsh for Classic FM, the royal, who is currently living at Birkhall on the Queen’s Balmoral estate in Aberdeenshire, also divulged that the Queen Mother would often play music with her grandson. 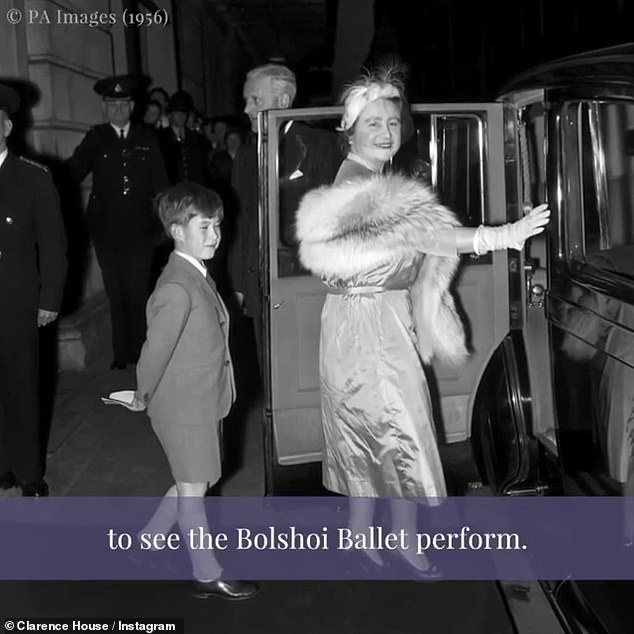 Prince Charles follows his grandmother, the Queen Mother, to their car after watching a matinee performance of ‘The Fountain of Bakhchisarai’ by the Bolshoi Theatre Ballet of Moscow at the Royal Opera House, Covent Garden, London in 1956 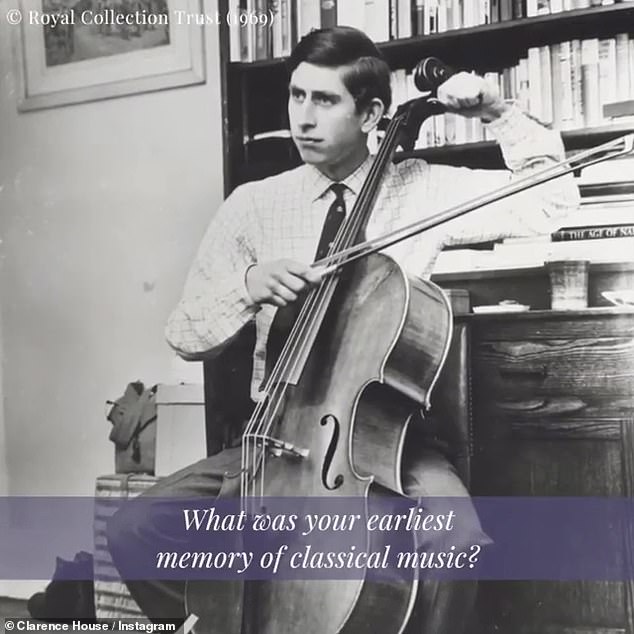 Prince Charles, who learnt the cello (pictured performing) and trumpet at boarding school, has been vocal about the role music has played in his life, previously listing favourites ranging from classical composers to 1930s dance bands and singer-songwriter Leonard Cohen 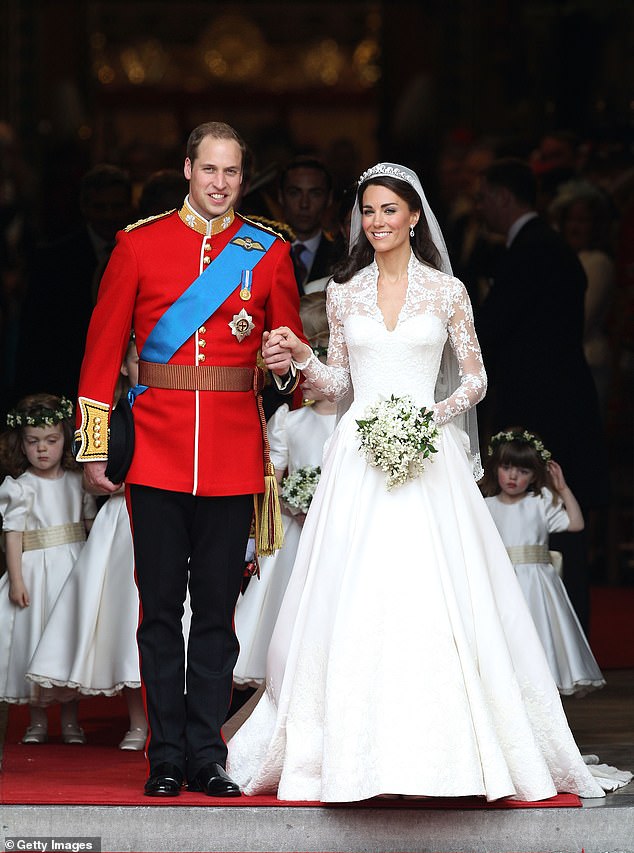 The Duke and Duchess of Cambridge smile following their marriage at Westminster Abbey on April 29, 2011 in London

A preview of the programme, which airs tonight at 8pm, was shared to the Clarence House Instagram page this afternoon, along with a selection of old family photographs showing Charles with his grandmother.

Asked what his earliest memory of classical music is, he said: ‘Well I suppose various people would play it around me. My grandmother used to play quite a bit of music, so I would hear something there.

‘But I suspect the first time I really became aware of it was being taken by my grandmother, Queen Elizabeth, to Covent Garden aged seven, I think.

‘It must have been in 1956 to see the Bolshoi Ballet perform. It was their first visit to the United Kingdom and I shall never forget that incredible occasion. I was completely inspired by it.’

Elsewhere in the interview, the prince revealed how he had helped his son Prince William, 37, decide on the musical choices for his 2011 wedding to Kate, 38.

‘I love trying to organise some interesting, I hope, pieces of music for certain occasions…particularly for weddings if people want,’ he said. 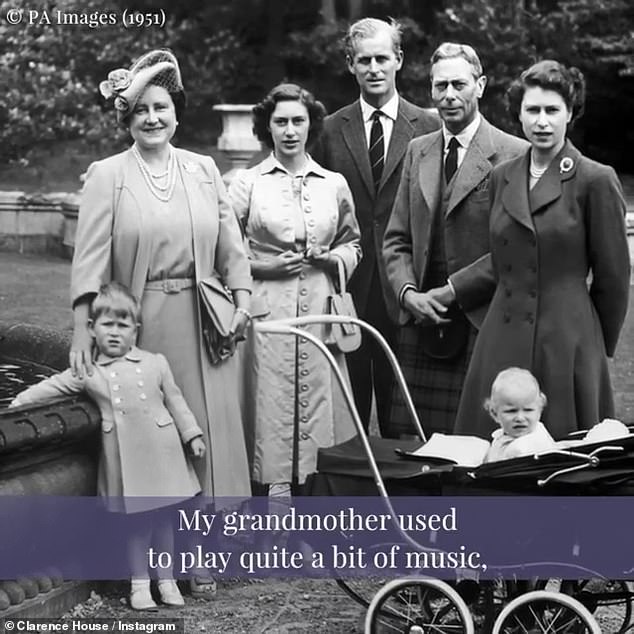 A preview of Prince Charles’ Classic FM programme, which airs tonight at 8pm, was shared to the royal’s Instagram page this afternoon, along with a selection of old family photographs showing a young Charles with his family (pictured in 1951) 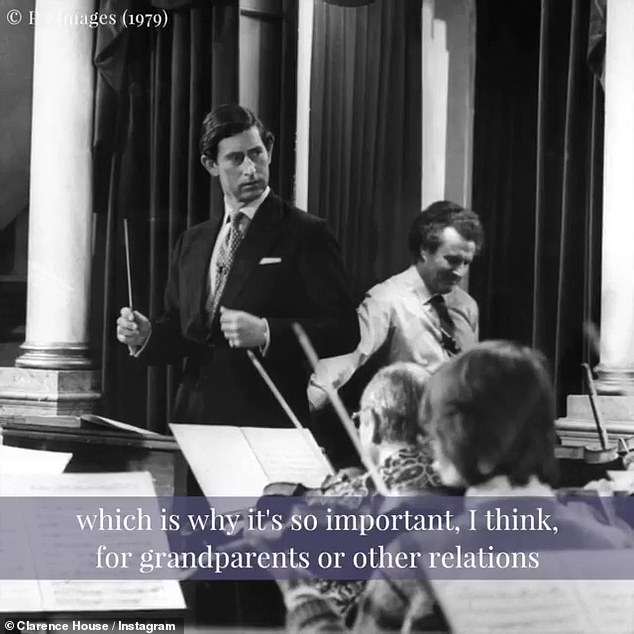 ‘I know my eldest son was quite understanding and was perfectly happy for me to suggest a few pieces for their wedding.

‘I hope that gave some people pleasure, but it’s rather fun having orchestras in for great occasions like that, and why not suggest a few pieces occasionally? Anyway… I do enjoy it.’

The royal, who has four grandchildren – Prince George, six, Princess Charlotte, five, Prince Louis, two, and Archie Mountbatten-Windsor, one – also talked about the importance of taking children to see performances.

He explained: ‘Which is why it’s so important, I think, for grandparents or other relations to take children – at about the age of seven – to experience some form of the arts in performance.’

A collection of photographs of a young Prince Charles enjoying music was shared along with the audio. 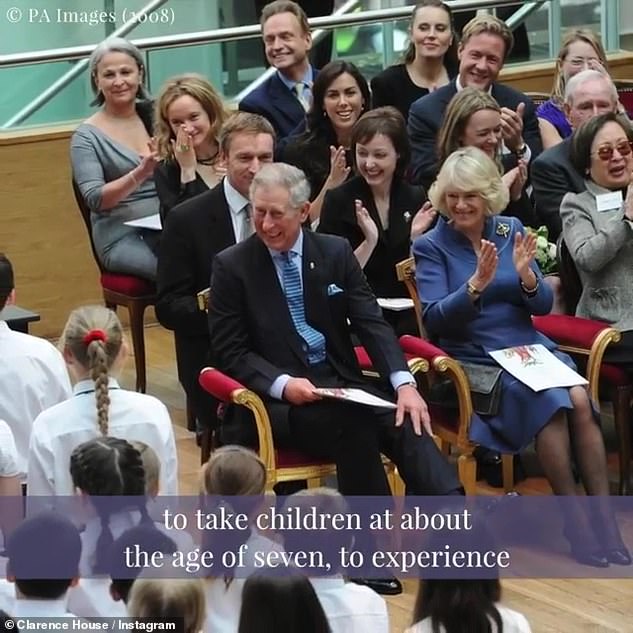 The Duke and Duchess of Cornwall enjoy a performance together in 2008. The pair are isolating in Scotland during the UK’s lockdown

The caption read: ‘His Royal Highness recalls one of his earliest memories of classical music, when he first visited The Royal Opera House, aged just seven, in 1956 with his grandmother, Queen Elizabeth The Queen Mother.

‘Tonight at 8pm, the first of two special programmes on Classic FM featuring The Prince of Wales will be aired. Each piece of music, chosen personally by His Royal Highness, has been recorded by a range of his musical patronages across the UK.’

Among the pieces he has chosen is Richard Wagner’s Siegfried Idyll – which Prince Charles previously revealed he had the Philharmonia Orchestra play as a ‘terribly romantic’ gift for Camilla on her 60th birthday.

Charles, who learnt the cello and trumpet at boarding school, has been vocal about the role music has played in his life, previously listing favourites ranging from classical composers to 1930s dance bands and singer-songwriter Leonard Cohen.

Fred Ward, Star of The Right Stuff, Tremors, Dies at 79