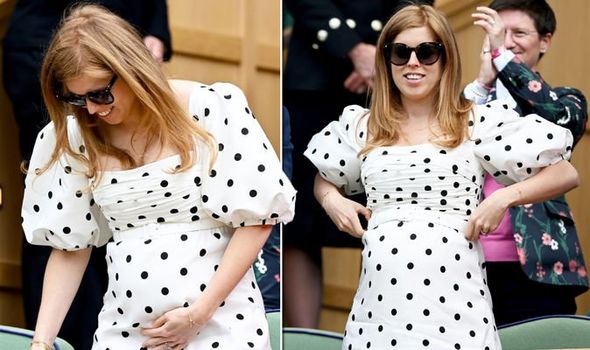 The royal was seen clutching her blossoming baby bump at the event. Her midriff was blooming underneath her Self Portrait dress.

This even marks Princess Beatrice’s first outing while pregnant, charming fans of the daughter of Prince Andrew, Duke of York.

She suggested the move is reminiscent of another royal.

In fact, the body language expert suggests the Duchess of Sussex may have laid the foundations for other royal women to be more tactile with their bumps while pregnant.

She said: “It could be that Meghan’s loving touches that appeared to keep her in constant contact with the baby might have opened the door for other royals to do similar.”

Meghan was notable for touching her baby bump frequently, which was observed by social media users.

Some questioned why the expectant mother was so tactile with her bump, although it is hardly unusual.

Many mothers like to touch, cradle and stroke their baby bumps, and some studies have found it is soothing for both the mother and the growing baby.

Beatrice showed similar care and concern for her child today.

Judi claimed the eldest daughter of Prince Andrew and his now ex-wife Sarah Ferguson seemed tentative while tackling the stands at Wimbledon.

She said: “Beatrice looks way more wary and protective when she makes her way down the steps though, studying the ground intently, with a small frown and a slight hunching of the shoulders suggesting she is picking her way rather carefully now she is pregnant.”

Beatrice and her husband, known as Edo, married last year amid lockdown.

The royal wore a secondhand dress, borrowed from her grandmother the Queen and altered slightly, to her wedding in July 2020.

Sadly, due to COVID-19 restrictions, few were able to attend but the Queen and the late Prince Philip were there.

The couple, who have been married almost a year, look very much in love, the expert confirmed.

Judi said: “The twinned and mirrored eye contact, smiles and head tilts shared between Beatrice and Edoardo show they are still very much in the romantic stages of love, especially as they appear lost in one another’s gaze while all eyes around them appear fixed on the on-court action.”

Beatrice’s dress is a £340 Self Portrait number.

The dress is the white polka-dot taffeta midi dress and is available at Harvey Nichols.

‘Frankie the Doorman’ is retiring