Queensland Premier Annastacia Palaszczuk has flagged that the state could reopen to travellers from the ACT at the end of the month if concerns about their identification are settled.

On Tuesday, South Australia lifted its 14-day quarantine requirement for people travelling from the ACT. 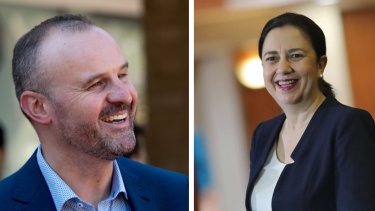 Mandatory quarantine will remain for NSW residents until health authorities are confident community transmission has abated.

Ms Palaszczuk and her deputy, Steven Miles, indicated Queensland would follow suit if there were no major outbreaks in South Australia in the next fortnight.

"We have always said we will look at that at the end of the month," the Premier said on Wednesday.

"I have raised some issues, and I will continue to raise them at national cabinet, about ID around the ACT.

"I will be having a conversation with Andrew Barr, the ACT Chief Minister. We had concerns about lack of ID and we will look at that very closely to see what provisions can be put in place for the ACT around the end of the month."

A Queensland government spokesman says the Premier wants to ensure Canberra residents could prove they had not travelled through Sydney.

The last confirmed case of COVID-19 in the ACT was in Canberra on July 10.

Mr Miles said he would “certainly be keen to look at what South Australia has done” when Queensland reviews its border regime at the end of the month.

“We will have more to say about it between now and the end of the month,” he said.

“I understand it is now about 65 days since the ACT has had a case so we will take that into account when we make our decision about the borders.

“The ACT is complicated because of the fact it is surrounded by NSW, but we will work through those issues.”