Imagine seeing your GP and instead of a pharmaceutical prescription, they refer you to an art class, or suggest joining a community choir. It might sound like an outmoded 1970s notion, but “arts on prescription” is a growing movement in the treatment of mental ill-health; in Britain and other countries, it’s been found to improve the wellbeing of participants and led to a reduction in healthcare costs. 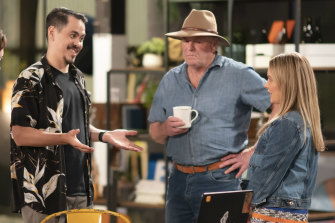 Now Professor Katherine Boydell from Australia’s Black Dog Institute is studying whether engagement in arts-based activities can help here. One in five Australians is believed to experience symptoms of mental ill-health in any given year. As part of the study, a new ABC documentary, Space 22, features seven strangers aged between 18 and 66, whose experiences of mental illness range across anxiety, depression and post-traumatic stress disorder, and who take part in a range of creative endeavoursover six episodes. Boydell measures their results throughout, and they are supported by Sydney psychotherapist Noula Diamantopoulos, who specialises in art-based therapy.

Hosted by singer Natalie Bassingthwaighte, the series also features visual artists Wendy Sharpe and Abdul Abdullah and singer-songwriter Eddie Perfect. Bassingthwaighte has struggled with mental ill-health for years and was thrilled to be involved. 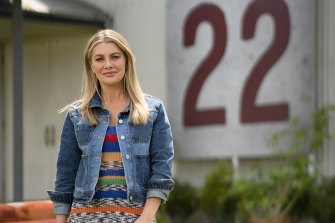 “I felt like everything I’d been through until this point, I’d been through to get here,” she says. While she says she hasn’t “hidden away” from discussing her mental health, it’s never “been at the forefront”.

“I was nervous to be that person – what that would look like, how would that potentially play out in my career – so I wasn’t laying it all out there as I feel comfortable enough to do today. I think now that it’s so important to talk about because there are so many of us going through it.”

All the participants came out of the experiment with a higher sense of wellbeing (using Black Dog’s scientific measuring), but perhaps none had such a radical turnaround as 66-year-old Sydney man Ray (participants are known only by their first names). 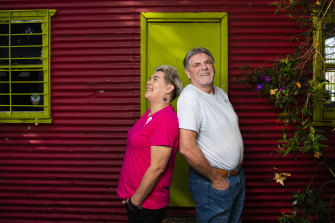 Vivienne and Ray have embraced the arts after participating in <i>Space 22</i>.Credit:Louise Kennerley

At the start of the series, Ray, a retired engineer who suffered childhood abuse resulting in a lifetime of depression and anger, says he wakes up every morning disappointed he has lived through the night; aside from his daughter and granddaughter, he finds little to enjoy in life. “I was always an outsider, I always felt alone, or lonely,” he says. It’s difficult viewing. But at the risk of cliche, across the documentary’s six episodes, you really can see the light returning to Ray’s eyes.

In recent years Ray found help in the form of trauma-based therapy, but anything remotely artistic was nowhere near his radar. “I always thought that the arts were a waste of money,” he says. “I thought that if the shit ever hit the fan with the world, the arts were the first thing that could lose funding because we didn’t really need them. I was quite feral on that – I just thought it was a waste of time.”

He came to the project through a call-out in a men’s mental health Facebook group. It was through the Black Dog Institute that he found the kind of therapy to help him, and was eager to help others. “I just wanted to advocate for men’s mental health,” he says, adding that he didn’t imagine getting anything out of it himself. “I went in with the attitude that the arts were just a wanky thing.”

But after 10 days of exercises including drawing, painting, photography and songwriting, Ray is a complete convert; being part of Space 22 was a genuine revelation.

“I do art every day now,” he says. “My loungeroom is looking like Wendy Sharpe’s studio now! I thoroughly enjoy it. I might be sitting here doing something else and I’ll get the urge to get up and put a few more brushstrokes on the canvas, or do another drawing.”

“When I go to bed now, the last thing I’m thinking of is what my next piece is going to be about,” he says. “And I have no problems getting up and feeling like I want to do something. The first thing that comes to mind now is, well, I’ll do a bit of art today and then I’ll get into doing house cleaning. It’s really surprised me how much I’ve changed.”

Eddie Perfect, who has spent a lifetime working in the arts, isn’t so surprised. “Human beings have danced and sung and created … instinctively since humans have existed; it’s in us to be creative,” he says. 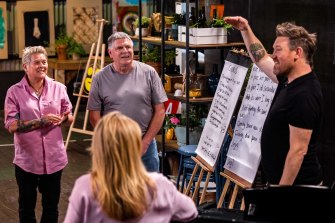 Songwriter Eddie Perfect helps <i>Space 22</i> participants including Vivienne and Ray write their own song.

In a way, Perfect, who spent two days helping the participants write a song together, says what Space 22 is trying to measure is something that is inherently known by all human beings.

“Participating in a group is good for the human psyche. It teaches people to listen, to collaborate, to share, to be generous, to risk, to fail, to express what you’re thinking and feeling,” he says.

Engaging in creativity for the sake of it, rather than for a professional or monetary outcome, he says, is something we should all be doing. “Just pure creativity without all this bloody X-Factor bullshit. Not this, only people anointed by these imaginary gods as a person who is chosen to sing or dance or perform, and if you’re not one of those people you sit down, shut up and leave it to the talented people. We don’t do that with sport, or mathematics,” he says. “There’s no other human endeavour where we don’t expect people to participate without being professional except the arts – and it’s ridiculous!”

Vivienne, another of the program’s participants, says that after a few days with the group, she felt something inside her shifting. “I’ve done talking therapy for years – debriefing incidents and situations – but no art or music, and I loved it. It was a form of self-expression I’d never tapped into before,” she says. “I didn’t know what it was going to do to my brain, but I had some big breakthroughs.”

A former scientist, Vivienne, 55, is a survivor of childhood sexual abuse, addiction and homelessness. She’s always loved music and looking at paintings, but had never picked up a paintbrush herself. Since Space 22, art has become a part of her everyday life.

“The producers gave us all a beautiful art kit as a thank you, and then all my friends gave me arts supplies, so I’ve been painting a lot – it’s a really good way to connect,” she says. “We all need something other than just sitting in a room talking about our trauma. It’s part of it, but it can be isolating. Hopefully, people will get [from the program] that when you come together as a group, no matter what your background, there’s an enormous amount of healing power in that. The whole thing was just so uplifting.”

Even if, as happened with some of the participants halfway through the experiment, there were some low points.

Creativity, says Perfect, isn’t necessarily only an enjoyable experience. “Things that are confronting and frustrating, difficult to overcome … for me, that’s what creativity is – reducing it down to something that is like, taking a stroll in a meadow among lovely flowers sells it short. I think creativity is a real workout, not just for the joy receptors in our body, but things like frustration and pain and anger – that’s where art really comes into its own,” he says.

“I think we want challenging, engaging and rewarding complexity in our lives and art can give that to people.”

Major change to Universal Credit payments in July – are you affected? | The Sun