As any conscientious pup parent knows, dogs sometimes grapple with anxiety for a number of reasons: Certain sounds, trips to the vet, or meeting new humans can all result in a nervous fur baby. In recent months, weighted blankets for humans have become an anxiety-busting trend. The blankets, which are typically sold for $100 to $300, apply pressure to your body in ways that are scientifically proven to alleviate anxiety. Now, similar blankets are available for anxious pups, but are weighted blankets safe for dogs?

"If you are going to purchase a weighted blanket for your dog, use caution," Animal Medical Center’s Dr. Carly Fox, DVM, tells Bustle. "The jury is still out on their safety and efficacy. There are no known studies that show that weighted blankets are effective in helping alleviate your pet’s anxiety. However, there are studies in people that show their benefits in alleviating stress, PTSD, and general anxiety. … Some dogs do have a difficult time coping with anxiety and sensory disorders, such as fireworks or loud noises. If we extrapolate from human studies, it’s possible that weighted blankets can be beneficial."

Weighted blankets have been shown to help calm frayed nerves in some humans by simulating a ‘swaddling’ effect, LiveScience says. "The underlying theory behind the weighted blanket phenomenon is called sensory integration. The deep and consistent pressure of the weighted blanket may help lower the body’s … level of arousal and stress. When your body feels calmer, your brain follows suit," writes PetMD. While the blankets might produce a similar, soothing effect in anxious dogs, there may be some safety concerns to consider before using weighted blankets for pets. 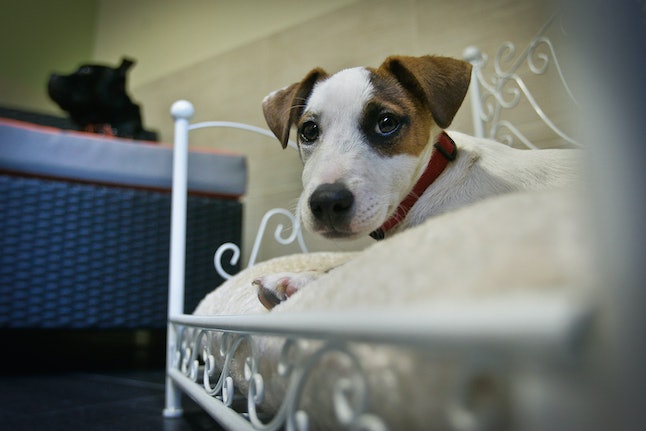 While some people like the feeling of weighted blankets and find them comforting, others may not. Similarly, some dogs might feel too restricted by gravity blankets, PetMD writes. Also, even the lightest blanket can be too heavy for some dogs — especially if your furry kiddo is on the smaller side. “If your dog or cat is only ten pounds, having another two to four pounds placed on top of them may cause them discomfort and may force your pet into a position in which it may have a difficult time getting up and turning around,” says PetMD.

For larger animals, there are still some potential safety concerns. If your weighted blanket is designed for humans, it might put too much pressure on your dog’s chest. Also, since gravity blankets are typically filled with weighted beads, extra care should be taken if your pup has a tendency to chew. Eating weighted blanket parts can potentially pose some serious risks to your dog’s health — and no one wants a trip to the doggie ER.

"There is concern that weighted blankets may be too heavy for pets, especially smaller dogs and cats," Dr. Fox says. "The pressure of the blanket may make it difficult for them to move or even breath." Extra caution should be taken in pets with asthma, and "in brachycephalic animals (ex. French bulldogs, Pugs, Persian cats) who have difficulty breathing and expelling heat due to their flat faces. The weight the blanket puts on their bodies may induce panic, if it prevents them from moving around freely, which could cause them to go into respiratory distress." 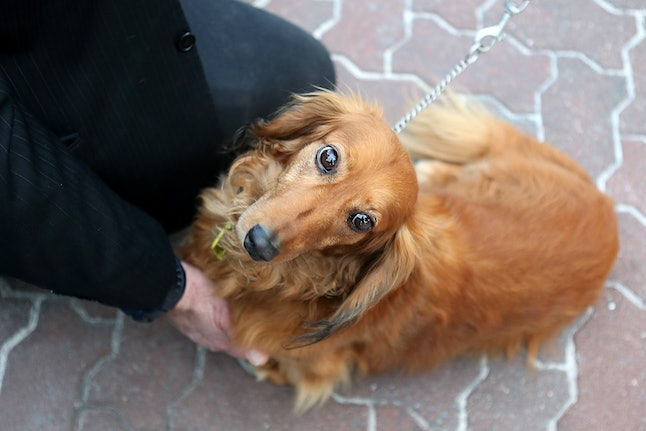 If you do decide to try a weighted blanket for dogs, the trainers and behaviorists at Smart Dog Owners suggest that they can be helpful for anxiety and PTSD, and some vets may use them as part of your pup’s treatment protocol. Smart Dog Owners notes that the blankets might be a soothing aid for emergency situations, or if your nervous dog is around a new person for the first time where a hug or touch wouldn’t be welcome. If the blanket is the right size, and isn’t too heavy for your pup, they should be able to move freely with it on, or shake it off when they’ve had enough, Smart Dog Owners says. The best weighted blanket for your dog is one that weighs no more than 10 percent of their body weight, just like those for humans. If your pup weighs 40 pounds, for instance, pick a blanket that weighs four pounds or less.

If you’re dog seems uncomfortable with a gravity blanket, skip it and try something else, says Smart Dog Owners. Weighted Thunder Shirts or anxiety vests might work better for nervous dogs who don’t like weighted blankets. "[Thunder Shirts] also produce gentle pressure on your pet’s body to help reduce stress and anxiety by the same principles as a weighted blanket, but without the risks," notes Dr. Fox. The Thunder Shirt is fitted to your pet’s body, which allows them to move freely, and studies have also proven its efficacy. Regardless of what you choose, makes sure to monitor your pet closely and consult with your veterinarian.”

So, if you find that a weighted blanket is a calming solution for your anxious pup, then carry on — just make sure to supervise them when using it.

Save yourself money in 2021 with these neat saving hacks