Melbourne's footpaths and streets will be transformed into open-air dining areas as part of a plan to bring businesses back from the brink of bankruptcy and lure people back into the CBD.

Friday night drinks could have a very different feel, with footpaths, lanes and even some streets temporarily transformed into dining areas under a proposal modelled on New York's Open Restaurants initiative, which is credited with helping 9500 restaurants and cafes keep afloat during COVID-19 restrictions. 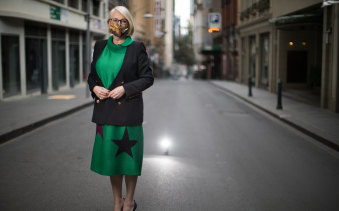 It is understood the City of Melbourne is also discussing with the state government ways to simplify its liquor licensing scheme, to allow hospitality businesses to serve alcohol at outdoor dining areas.

Lord mayor Sally Capp said that once the state government unveiled its long-awaited plan on Sunday for heading out of stage four lockdowns, the city would "press go" on initiatives designed to bring people back to the CBD.

Before Melbourne's rolling lockdowns first took effect, almost 1 million people travelled into a bustling CBD each day. Last month the city centre recorded a grim milestone as the number of pedestrians plummeted by 90 per cent.

The effect on businesses has been devastating. With foot traffic mostly gone, the City of Melbourne estimates retail vacancy rates will rise from 3 per cent before lockdown to 7 per cent.

"The lockdown has taken a financial and emotional toll on our community," Cr Capp said.

"Businesses are working hard to do the right thing and it's crucial we work together to provide some certainty and clarity for the future."

As cities around the world emerge from hard lockdowns, many have embraced outdoor dining as a way to satisfy physical distancing requirements and avoid cramped or poorly ventilated indoor spaces.

Cr Capp said she would push for fees to be waived for outdoor dining permits to further reduce cash pressures on businesses.

There, according to guidelines issued by the New York State Governor’s office, strict rules mandate the distance allowed between tables (at least 1.8 metres), and patrons are expected to wear masks unless they are sitting at a table. Staff are required to wear masks at all times, and there are also rules in place for cleaning and limits on the number of diners at each table. Customers are allowed to use indoor bathrooms, but indoor seating and dining are off limits.

About a dozen working groups have been meeting with sections of the government this week, as Victoria limps towards the rolling back of restrictions.

Among those putting recommendations to the government for the safe and staggered transition out of hard lockdowns is Cr Capp's hand-picked group of business and cultural leaders, dubbed Bringing Melbourne Back Better.

The City of Melbourne has also established a City Economy Advisory Board, which includes representatives from the Australian Retailers Association, Australian Hotels Association, Victorian Chamber of Commerce and Industry, and Melbourne Central, which has been meeting regularly with the government.

‘We say no’: Coalition vows to repeal hikes to stamp duty if elected