Heiress, 24, who spends £1,000 on shoes a month admits she’d ‘cry’ if she had to live in a council flat as she moves in with family who have £18 a month left after their bills are paid on Rich Kids Go Skint

An heiress got something of a culture shock after swapping her multimillionaire parents’ five-bedroom mansion for a struggling family’s council flat on tonight’s Rich Kids Go Skint.

Jess, 24, from Liverpool, who’s used to having her own swimming pool and doesn’t like to drink tap water, explained on the show – airing at 9pm on 5Star – that she could easily spend £1,000 on shoes a month and loves designer clothing.

She went to stay with Gemma and Yinka Oloye who live in Birmingham with their two-year-old son Matthew. Customer service associate Gemma is the sole earner and after bills, food and debts are paid out of her £1,452 monthly income, the family are usually left with £18.

Jess, who is self-employed and owns her beauty salon, was shocked by the state of the Oloye’s two-bedroom tiny flat and said she would ‘cry’ if her property developer father told her she had to live there. 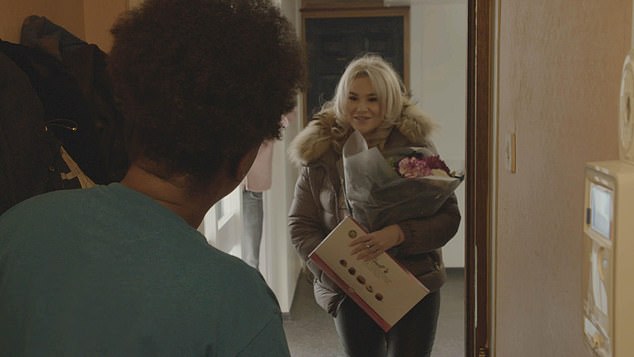 Jess, 24,  pictured, from Liverpool, is the daughter of a millionaire property developer who’s grown up in a five-bedroom mansion in the countryside. She said on tonight’s Rich Kids Go Skint, airing at 9pm on 5Star, that she doesn’t drink tap water and that she doesn’t know how people can live in council flats 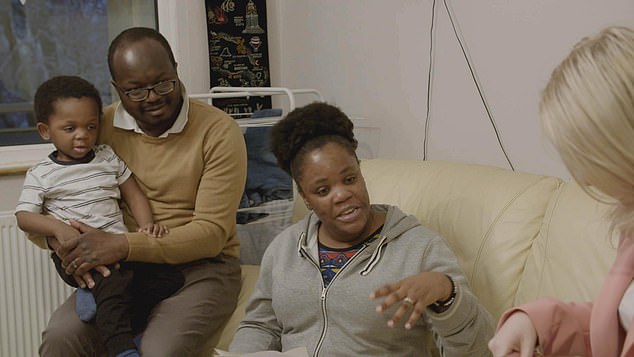 Yinka and Gemma Oloye, pictured with their two-year-old son Matthew, live in a two-bedroom council flat in Birmingham

Already, when travelling to the Oloye’s abode, Jess said she was feeling apprehensive about the experience.

‘It looks very bleak, I hope it’s not a lot of people crammed into a tiny space,’ she said, before adding, ‘I’m really nervous now.’

After meeting the family and offering Gemma flowers, the rich kid had a littletour around the flat, which she found very small and cluttered.

‘If my dad told me, “You have to live here now”, I think I’d cry,’ she told the camera, after taking a look at the family’s small bathroom and toilets. 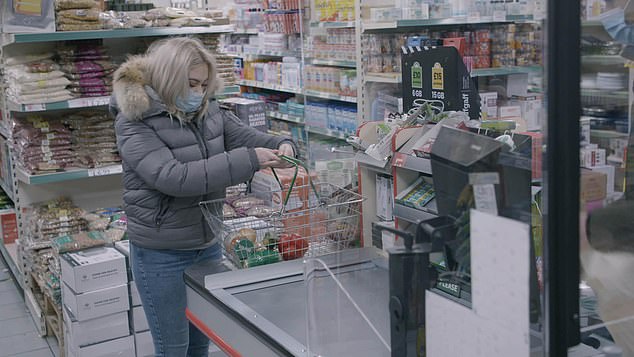 While staying with the Oloyes, Jess has to learn to shop on a budget and participates in the chores

‘I just cant believe people live like this,’ she said, taking a look at the wallpaper peeling off the wales and the damp ceilling.

‘If I was coming to live here, I’d get rid of everything, sell it, start again,’ she said.

‘I immediately feel so grateful for the things I have and where I live compared to here,’ she said, before adding, ‘I feel so sorry for them that they live here.’

The Oloye’s home was a far cry from Jess’s own family seat, located in the countryside near Liverpool.

The multi-million property counts five rooms and five bathroom, with an attached pool house and a large garden.

Thanks to her doting parents, Jess received a £32,000 Range Rover as her 21st birthday present. 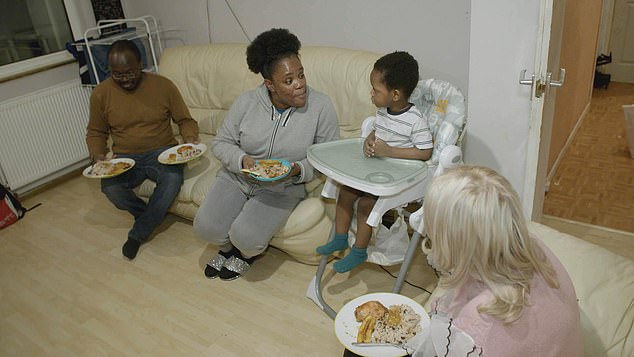 Gemma, pictured, told Jess she was left with £18 a month after utilities, rent and food are paid, as well as paying up her debt

But she was still determined to earn her own money, and had opened her own beauty salon after dropping out of university.

‘It’s important to me to work really hard, even if my parents are wealthy, I want to be just as successful as them,’ she said.

‘I love shopping, shoes are my thing,’ she said while giving a tour of her wardrobe.

Louboutin, Alexander McQueen, Valentino,’ she said, pointing from one pair to the other, including her first pair of designer heels – £599 Christian Louboutins with the trademark red sole.

She also said she owns a £1,000 Louis Vuitton bag, casually adding with an embarrassed chuckle: ‘I very rarely use it, I even forgot I had it.

Speaking of the realities of staying with a skint family, she said her fears included ‘sleeping on the couch, eating unhealthy food and tap water.’ 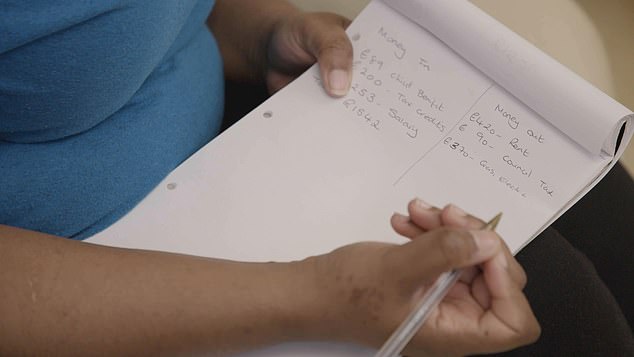 Gemma is the sole earner of the family, and her £1452 a months soon go down the drain after her different bills are paid, pictured making her budget

She explained she dislikes drinking tap water because it comes from a ‘black rim.’

‘I want to prove to the family that just because I have money doesn’t mean I’m a spoiled brat,’ she said.

Meanwhile, Gemma, Yinka and Matthew were barely getting by due to a loan the couple were repaying after tragic circumstances.

Unemployed Yinka, said he’s tried to find a job as a air traffic controller but can’t afford the fare to go to the interview.

Yinka grew up in Nigeria, where he was used to a high standard of living, with a driver and a maid, but the death of his father, who was the sole bread winner, changed that.

Gemma opened up about the couple’s difficult past.

‘We ended up having four miscarriages and then a stillbirth when they did the scan and said there was no heart beat, I remember just thinking “Wow, this really does suck”,’ she said.

‘We had to find the finances to bury her, I didn’t even realise it’d be that costly,’ Gemma said, before explaining the couple were £10,000 in debt due to the funeral and other loans. 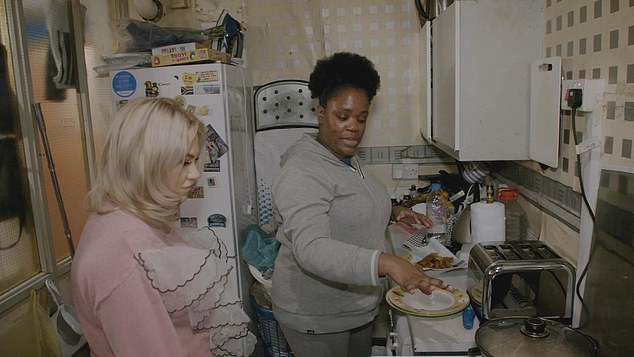 Jessica, pictured, observed Gemma while she cooked a budget meal for the whole family. The heiress said she ‘chose’ not to cook

Jess was shocked to hear about the couple’s financial situation, especially the fact they only had £18 of leftover money a month.

‘I just feel so sorry for her, I would never think of £18 being significant, I’d spent it on lunch,’ she said.

She said the lack of money and the fact Yinka couldn’t find a job must be a ‘real strain on their relationship, financially and together, I think that’s so hard,’ she said.

Gemma remained positive, saying: ‘As bad as our situation is, there are always people out there who are worse than me. There are people who sleep on the street,

‘I do think the world would be such a better place if everybody turned around and helped each other,’ she said.

She tried to transfer some of this belief to Jess, whom she took to a homeless shelter.

Gemma revealed she tried to pop by the shelter as much as she could, sometimes everyday, to say hello or bring food or items she had to spare.

‘The place we’re going to is like a homeless shelter, no matter how little I have, there’s always someone that has less, so no matter what I can give, I give,’ Gemma told Jess.

Speaking to the men staying at the shelter, Gemma revealed she had also relied on support housing as a young woman, and knew how important it could be for people down on their luck.

‘I’m not any means rich but to me it’s important to make sure you help everybody,’ she told them

This was really impressive to Jess, who said:  ‘Gemma so close to living on the bread line but she’s so inspirational in the fact she goes back to help other people.

‘She’s so nice and so kind-hearted to do something like that, I definitely need to take a leaf out of her book.’ 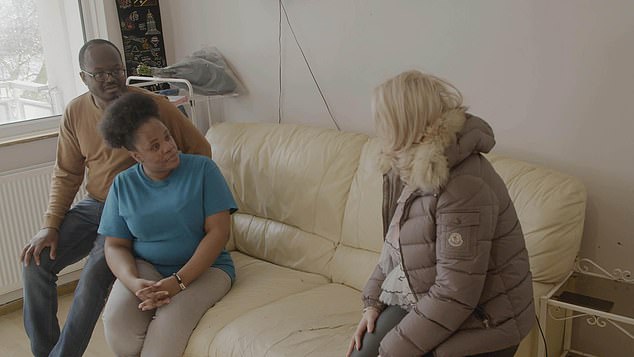 The heiress , pictured right in a £700 coat from Moncler, said she was shocked by how small the Oloye’s apartment was

After their trip to the shelter, Jess got even more of a glimpse into Gemma’s budget living by making a detour to the charity shop where they hunted for some bargains.

But when came time to bed down, Jess was a little unsure.

‘I’m just worried I’m not going to sleep because it’s a unusual environment,’ she said, adding she had never used a sleeping bag or slept on someone’s sofa before.

The next day, Jess admitted she hadn’t slept much.

‘Sleeping on the sofa was hard, there was another baby crying in another flat somewhere, I’m not used to that, hearing other people goings-on in their own homes,’ she said,

‘I  just don’t think I’d be able to live in such a small space.’

The morning was spent helping Gemma with chores around the house, including doing the laundry and the dishes.

Gemma explained her washing machine was ‘temperamental’ and didn’t work all the time, and was so old, she called her Betsy.

Later during the day, she opened up to Hess about her miscarriages and her stillborn baby girl. 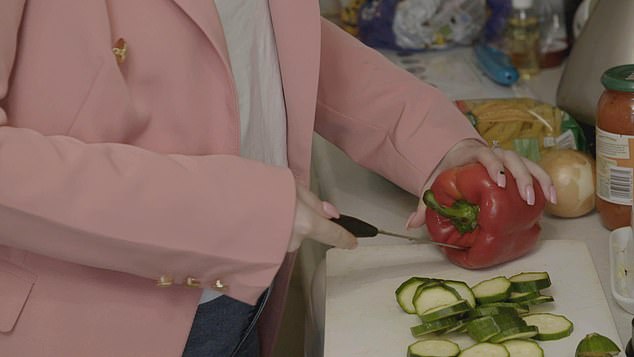 Jess put together a budget dinner for Gemma, Yinka and their son, with the paper and courgette she had bought

She was speaking of the different reasons why the family had debt.

‘One of them was unfortunately we had a loss. We were pregnant with our little baby girl, we lost her at 24 weeks, she was born stillborn and it was a time where you had to pay for the funeral arrangements,’ she said.

‘We did have help from family members, but we still had to take on the debt to cover that cost,’ she said.

This was ‘heartbreaking’ for Jess.

‘That must have been so hard.’

Jess told Gemma she ‘chose’ not to cook and could spent £100 on one meal on a night out with friends.

As a last challenge before her departure, Gemma put Jess to the test and told her to go buy a dinner for four on a budget of £5.

Jess was not sure she’d manage the task, saying: ‘£5 is probably something I’d lose at the bottom of my handbag and I need to make a meal for everyone, I don’t think that’s possible.

But the beautician managed to buy pasta, pasta bake sauce, an onion, a courgette and a pepper for £4,99, a penny under her budget.

After a difficult start in the kitchen where she struggled to cut the onion and even dropped the cutting tray, she managed to put the meal together, which was appreciated by the whole family.

‘Before you came we were kinda worried we’d get someone who didn’t have a single clue, who was spoiled or didn’t want to do certain tasks or certain things, you’re nothing like that,’ Gemma told Jess.

Jess thanked her and admitted she hadn’t expected Gemma and Yinka to be this welcoming.

But even though she had a good experience with the family, the heiress was looking forward to going home.

‘I’m excited to go in my big house, not in this tiny flat, but they’ve been so welcoming,’ she said.

‘Thank you so much for making me feel so welcome,’ she told the couple.

As a parting gift, she got Gemma a £200 voucher for a new washing machine, joking she could call her Jess.

‘One thing I learned from Gemma is that practical things are more important than luxury items,’ Jess said, adding: ”hat’s why I gifted her a washing machine, because that’s what she really needs.’

She also invited the whole family to visit her in Liverpool and Gemma to come to her salon for any treatment she wanted.

‘Overall I’ve had such a nice time, I didn’t except it to be like this at all. I’m not really sure what I excepted to walk into but Gemma has been so welcoming and she’s an actual inspiration,’ Jess said.

In an update since the show was filmed, viewers learned that Jess has kept in regular contact with the family and started donating to her supermarket’s food bank.

Girl, 6, saved mum’s life when she vomited and fainted while driving car