RICHARD LITTLEJOHN: What’s worse than winter wonderlands where reindeer are arthritic donkeys with cardboard antlers? Thanks to our disgraceful politicians, we’re all squawking in a Brexit Blunderland

Seventeen years ago, I wrote a novel, To Hell In A Handcart. Part of the action took place at a tacky theme park called Goblin’s, located somewhere in southern England.

Disneyland, it wasn’t. The surly, tattooed staff were dressed as elves, the overpriced food was poisonous, and newly-arrived visitors were wheel-clamped as they drew up at reception.

The whole place was run entirely for the convenience of the management and nothing worked properly.

Guests included a party of juvenile delinquents, taken on holiday at taxpayers’ expense by their social worker in a doomed attempt to rehabilitate them.

They spent their time fighting, swearing, drinking, abusing employees and fellow campers alike, burgling the chalets and stealing from cars.

It all comes flooding back every Christmas when I read about the latest rip-off ‘Winter Wonderland’ experience, which fails miserably to live up to expectations, let alone the Trades Descriptions Act.

Visitors are promised a magical world of reindeer, ice skating and a jolly Santa handing out presents. 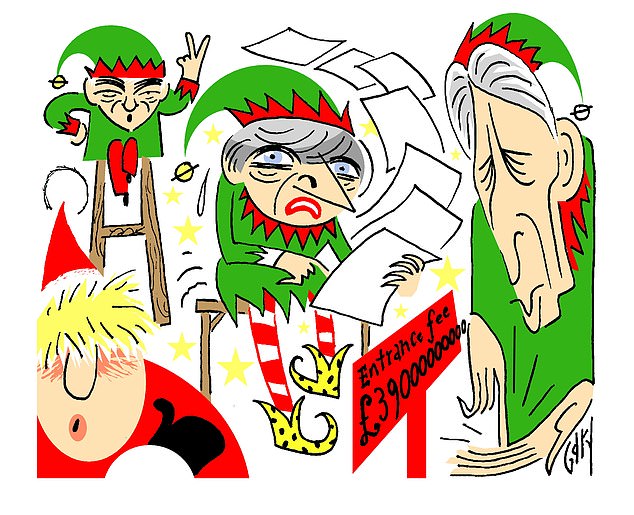 If we’re promised something, we expect that promise to be honoured. Sadly, as we have learned from bitter experience, our politicians don’t believe the usual rules apply to them

The reality is invariably a cross between an illegal gipsy camp and a derelict garden centre, dropped into the middle of the Somme during World War I.

This year’s bitter disappointment is the Santa South West Christmas Village in Shepton Mallet, featured in the Mail on Wednesday, along with a selection of seasonal ‘attractions’ from around Britain.

It’s the same old story. The ‘reindeer’ turn out to be a couple of arthritic donkeys, rescued from the knacker’s yard, with cardboard antlers tied to their heads.

The ice rink is a sheet of polythene plonked on a sea of mud and Santa looks like someone who should be helping the Jimmy Savile squad with their inquiries.

My favourite is still the Lapland New Forest extravaganza, which persuaded 5,000 unsuspecting punters to part with £30 a head, up front, online.

The entrance to the site was marked with a scribbled ‘Lapland: Way In’ notice, taped to a traffic cone, and made the approach to your average council recycling depot look like the Yellow Brick Road.

Things went downhill from there. Mangy huskies covered in mud were tethered to stakes, the ice rink was closed for repairs and after being forced to stand for up to three hours in freezing temperatures to see Santa, visitors were told if they wanted their pictures taken with him it would cost them an extra £10.

Tempers became frayed and the elves started brawling with customers. Santa was punched in the face by a father who had been queueing for four hours.

A young girl had to be comforted after arriving at the grotto, only to discover Father Christmas out the back having a quiet cigarette.

One of the elves took a smack in the face from a livid mum. Another suffered leg injuries when she was rammed by a pram.

A security guard said he was called a ‘pikey’ and punched on the forehead by an irate parent.

The site was subsequently raided by both the RSPCA and the local trading standards office and the organiser was revealed to be a scrap metal dealer and convicted fraudster, who had served time for tax evasion. I couldn’t help thinking:

That was ten years ago. This fiasco received widespread publicity. So why do people still keep falling for the same scam, year after year after year?

To be charitable, the ads are always enticing, even if the website has been created by a spotty youth on a laptop, using some professional photos he blagged off the internet.

People naturally want to treat their children at Christmas and, having paid for tickets in advance, are reluctant to cut their losses — especially if they’ve travelled miles through heavy traffic to get there. What parent wants to tell their kids they’re not going to see Santa after all?

But I think there’s a more compelling reason. The British by inclination are a fair-minded, trusting people.

Sadly, as we have learned from bitter experience, our politicians don’t believe the usual rules apply to them. As far as they are concerned, promises only exist to be broken.

What is currently unfolding in the House of Commons during the five-day — five-day? — Brexit debate isn’t a vibrant exercise in democracy. It is a scandalous affront to democracy.

Binding commitments to respect the outcome of the referendum, to implement the will of the people, have been trampled on ever since the morning the result was announced.

Never mind that these promises were made before, during and after the campaign and again in subsequent general election manifestos.

The behaviour of the entire political class — with a few honourable exceptions — has been a disgrace, from the Prime Minister and the Labour leader to the recalcitrant backbenches.

As Liam Fox made clear this week, and as I’ve been telling you for ages, MPs have stolen Brexit from the people and are doing everything possible to limit or overturn it.

Their cynical antics have made for a deeply demeaning spectacle, whichever side of the debate you happen to be on. (And you all know where I stand.) 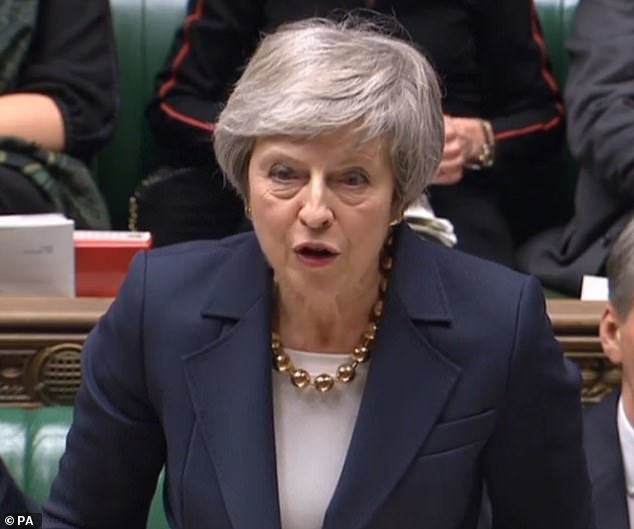 Meanwhile, Downing Street has just warned that unless MPs back Mother Theresa’s deal, Santa’s sleigh will be grounded by air traffic controllers in Europe and Christmas will be cancelled

I can’t quite work out who are the ghastly Goblin’s staff and who are the juvenile delinquents. They’re all brawling among themselves.

And what’s worse, they’re enjoying it. Every minute of it, squawking in the Commons chamber and on the TV gantry over the road.

This is their World Cup, their Wimbledon, their Ashes series. And to hell with the paying public. Can you imagine the political class running a Winter Wonderland?

After driving for about ten hours, stuck behind thousands of lorries backed up on the M2 because of the blockade at the Channel Ports, you’d arrive to find the gates locked.

Spread Fear Phil would be on the door, with the sparkling demeanour of a maitre d’ at a crematorium, insisting that it will cost £39 billion to get in, even though you’ve paid already. And there’s no guarantee you’ll ever be allowed out again.

When 17.4 million voted Leave, we were sold the prospect of an independent Britain, with control of our money, laws and borders, free to trade with any country in the world.

But just like Santa’s South West experience, the reality has turned out somewhat differently.

If the politicians ran the Winter Wonderland, nothing would be as advertised. Instead of a Jolly Santa, we’d be stuck with that malevolent elf John Bercow, flicking two fingers at us from his elevated position in the Speaker’s chair.

Mrs May would be perched on a rickety picnic table in her Santa’s Little Helper costume, insisting that this is exactly what we voted for — and if we don’t believe her, it’s there in the small print. All 585 pages of it.

Boris would be booming out from his Father Christmas suit, promising £350 million a week for the NHS. Ho, ho, ho!

In this Brexit Blunderland, there would be no bread for the sandwiches, no clean drinking water and the sweet shop would have run out of Mars bars.

The queues snaking round the site wouldn’t be for Santa’s Grotto, they’d be the millions lining up at the DSS for unemployment benefit.

There’d be Corbyn in his cardboard antlers insisting that if only he was Father Christmas, it would be presents all year round — even though he would bankrupt the country in the process.

Meanwhile, in breaking news, Downing Street has just warned that unless MPs back Mother Theresa’s deal, Santa’s sleigh will be grounded by air traffic controllers in Europe and Christmas will be cancelled.

We are all going to hell in a handcart.

Michael Lynch and Chrissy Sharp: ‘We can easily ignite each other’