Secret documents have cast doubt on the independence of a wide-ranging review into the National Disability Insurance Scheme that recommended the most radical overhaul of the $25 billion program since it was established.

Emails and draft copies of the 2019 report, written by former senior public servant David Tune, show National Disability Insurance Agency officials inserted an entire chapter into the review of the scheme’s legislation, and made substantial changes to almost every part of the document. 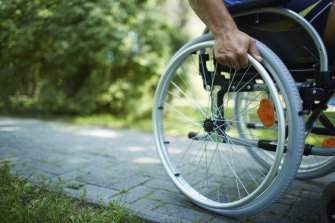 The disability sector is opposed to the NDIS using independent assessments.

The review was used by the Morrison government to introduce independent assessments for NDIS participants, where health professionals employed by one of eight providers paid by the government will review users’ eligibility for the scheme. Disability advocates have labelled the measure a cost-cutting measure to reduce the number of people in the program.

More than 900 pages of documents, released under freedom of information laws, show emails from NDIA officials and Department of Social Services staff prioritising the NDIA board’s topics, “talking points” and inserting a multitude of changes to the draft versions of Mr Tune’s report.

One email, from an NDIA official, apologised that the changes to the document were “hideous – almost unreadable”.

The tracked changes appear to show the entire chapter devoted to introducing independent assessments – which was initially recommended by the Productivity Commission in 2011 – was also inserted by a public servant. 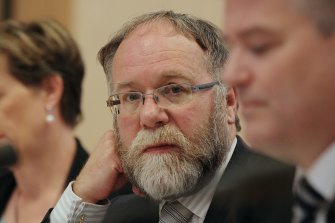 The planned overhaul to the system, revealed last month by The Sydney Morning Herald and The Age, has enraged disability groups and state and territory ministers, who have accused the federal government of a “power grab” by removing their previous rights to veto changes to the scheme.

From mid-2021, independent assessments will be part of the process in which people are accepted into the scheme. By the end of the year, it will be used to review those already part of the scheme.

The three-hour appointments will be used to “determine the significance of a person’s disability”, the scheme’s website says, and help the agency make “fair and consistent decisions” about who is eligible for funding through the scheme.

The assessments will be conducted by a panel of private providers such as psychologists, occupational therapists, physiotherapists and speech pathologists – but not the person’s usual therapists.

A coalition of 20 disability organisations issued a statement earlier this month warning the step could lead to false comparisons between individual NDIS participants. People with Disability Australia president Samantha Connor last month called for trials of independent assessments to be halted and for the government to instead engage in a “meaningful co-design process”.

A spokesman for newly appointed NDIS Minister, Linda Reynolds, said in a statement the review was conducted independently by Mr Tune and the government “respected his independence at all stages”.

“Mr Tune was provided with a small secretariat team to assist him in compiling the report, as is often the case with independent reviews of this complexity, but this in no way undermines his independence,” the spokesman said. Mr Tune was contacted for comment.

More than 400,000 Australians are being supported by the $25 billion scheme, which is jointly funded by the Commonwealth and state and territory governments. 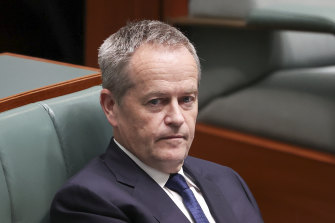 Opposition’s NDIS spokesman Bill Shorten said it appeared the “sham” report was designed and authored by the government with “one purpose alone”, which was “to steamroll through cuts to NDIS services and ignore the voices of the 430,000 people living with a disability who use the system”.

“The sham independent report is in line with the government’s secret plans to make radical cuts to the NDIS and use sham consultations to push through the compulsory assessments, despite the opposition from the entire disability sector,” Mr Shorten said.

The Morrison government responded to the Tune review of the NDIS Act on August 28 last year, saying it supported or supported in principle all 29 recommendations made in the report.

Former NDIS and government services minister, Stuart Robert, consistently argued proposed changes to the scheme would make it more responsive and fairer for participants and their carers.

“Independent assessments are a fair and consistent way of ensuring new and existing participants receive more flexibility and greater choice and control over the reasonable and necessary supports provided through the scheme,” he said in December.

“It is estimated independent assessments will save people with disability and their families collectively up to $170 million per year in out of pocket expenses.”

Mr Shorten said the opposition wanted Senator Reynolds to stop the compulsory assessments and make the NDIS work for people living with a disability.

“This is her first test and one the entire disability sector want her to pass,” Mr Shorten said.