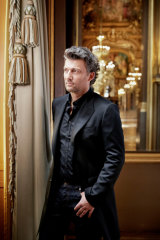 There’s something thrilling about seeing the world’s best in action. A person deemed the very top in their field, unrivalled by any other. It’s a position that brings enormous expectation and so often falls short of the imagined.

But sometimes a person comes along with a talent so rare, so undeniable, they can unite the public and critics alike across the globe. That’s Jonas Kaufmann. He’s it. A tenor of superlative musical intelligence, his instrument has a unique, burnished baritonal quality; it has depth, silky legato and immense power.

A moment occurred in Opera Australia’s concert performance of Giordano’s Andrea Chenier on Tuesday night, when the magnitude of what we were witnessing became fully apparent. In his Act I aria, the Improvviso, Kaufmann released his voice for a forte high B flat, which soared with grace and ease over the 70-plus musicians and enveloped the entire auditorium.

Then we knew: this repertoire, the whole world over, could not be sung any better.

This repertoire, the whole world over, could not be sung any better.

Here, the baritone baddie was superbly sung by Frenchman Ludovic Tezier, who cut through the orchestra without a hint of force. His is a dark, complex sound; passionate without being lush, it's perfect to reflect the malevolent Gerard.

Eva-Maria Westbroek has sung Maddalena opposite Kaufmann before and their rapport shines through. Vocally she’s fierce, with steely tonal colours across her range.

A sprightly 73-year-old Pinchas Steinberg led a joyful performance from the Opera Australia Orchestra. The musicians rose to meet Kaufmann and the excellent supporting cast, providing us an exceptional, world-class musical event that will not be soon forgotten.

The ‘Captain Marvel’ Trailer Is Everything You’ve Ever Wanted & More

Bella Hadid Strips Down for the New Michael Kors Campaign