A routine inspection of the International Space Station last month found a hole in Canadarm2, the station’s 60-foot robotic arm used to ferry payloads and perform maintenance on the station.

The culprit: a speeding piece of space junk.

The Canadian Space Agency and NASA said the 5 mm (0.20-inch) hole punched through a thermal blanket wrapped around the arm boom.

The arm’s performance was unaffected after what CSA officials called a “lucky strike.” 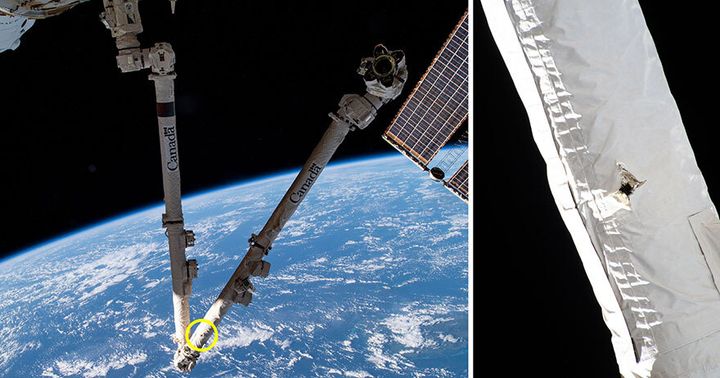 We’ll never know what, exactly, was responsible for the damage. NASA estimates there are 100 million pieces of debris larger than 1 mm in low Earth orbit.

While the size of those objects is relatively small, their speed of up to 17,500 mph ― more than eight times faster than an AR-15 bullet ― means even a tiny bit of junk can cause significant damage. Plus, the space station itself is moving at about the same speed, so a head-on collision poses a significant risk.

A number of space shuttle windows, for example, had to be replaced due to damage caused by paint flecks in space. In 2016, a possible paint flake struck a window in the space station’s Cupola, gouging out a 7 mm chip that was documented by European Space Agency astronaut Tim Peake.

“I am often asked if the International Space Station is hit by space debris,” Peake said at the time. “Yes – this is the chip in one of our Cupola windows, glad it is quadruple glazed!”

Of the 100 million pieces of space trash, NASA tracks roughly 23,000 pieces that are larger than a softball and capable of causing major damage.

How a Scarborough fisherman changed his mind about a Syrian refugee