There has been media debate whether “Spider-Man: No Way Home” could get a best picture Oscar nomination, since voters of the Academy of Motion Picture Arts & Sciences have been reluctant to celebrate movies in that genre. But describing this as a superhero movie is like saying “The Godfather” is a gangster film. It IS, but it’s much more.

The box-office success proves that the film is hitting a nerve with audiences: They needed this film. It’s first-class filmmaking and it’s also cathartic.

In his first in-depth interview about the new film, Watts tells Variety that he wasn’t tense or nervous on the first day of shooting. Instead, “I had a deep feeling of gratitude.”

He and the team began working on story/storyboards/previz in October 2019. After seven months, COVID brought things to a halt. They resumed in May 2020 but there was always a cloud hovering over things. Watts says, “There was a question ‘Will there ever be movies again?’ There was a feeling that the whole filmmaking experience was in jeopardy.”

Filming began in October 2020. “The first day was completely different from the first day of any film I’ll ever be on, because of the situation. So to be on the set and working, I felt deep gratitude. I think everyone else also felt that gratitude and I hope that comes across.”

Watts directed two previous “Spider-Man” films (the 2017 “Homecoming” and the 2019 “Far From Home”) and “No Way Home” picks up immediately after the end of the previous edition, with the public freaking out as Peter Parker is identified as Spider-Man’s alter-ego.

“Before COVID,” he says, “we planned a big New York location shoot with tons of extras. That became impossible. Even the most basic shot, of Peter Parker walking down the street, became a multilayered VFX shot.”

They filmed New York streets, then added principals, then layers of background crowds, since COVID protocol limited how many people could assemble at the same time.

“You always have challenges when making a VFX-heavy movie,” Watts says. “This one also involved everything you take for granted — and made everything 10 times more difficult.” 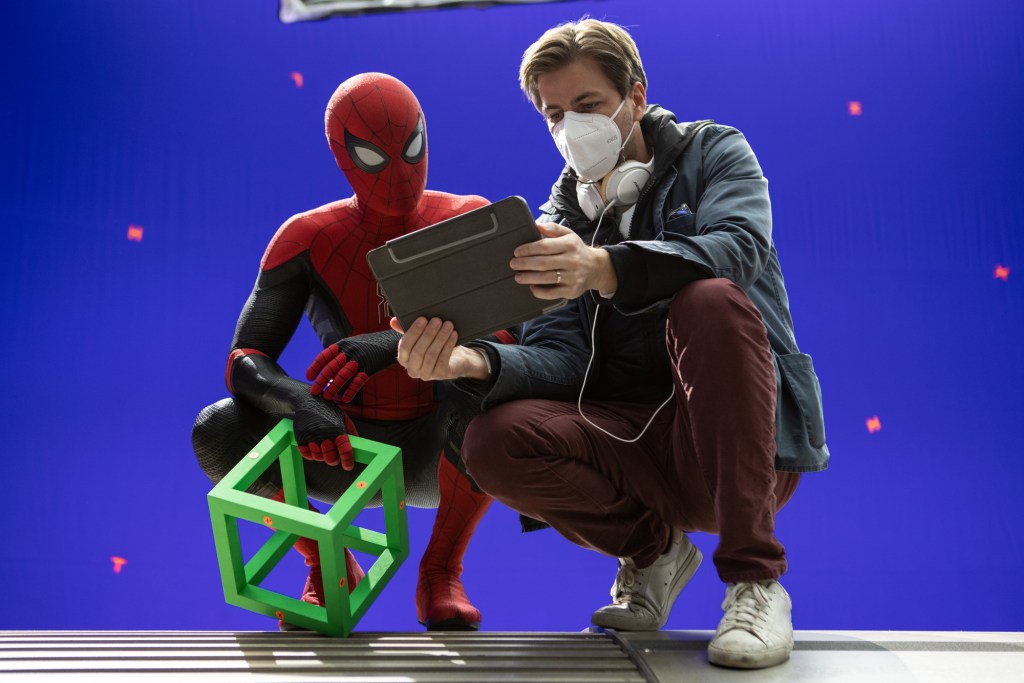 Though Watts had worked a lot in VFX, this level was “definitely a learning curve.”

“I was surrounded by incredible, award-winning actors every day. I love working with actors: It’s nice to be talking with people who have thought about the characters and the scenes at least as much as I have. Everyone was at the top of their game.”

Before filming the first scene with the three Spider-Men — Toby Maguire, Andrew Garfield and Tom Holland — Watts gathered them, plus principals Zendaya and Jacob Batalon.

“We sat on folding chairs in a circle and went through the script together. I had talked to everyone separately, but to have everyone together to talk about the story, how the pieces fit together and what Spider-Man meant to them — that was exciting for me. We had the only three actors to ever play Spider-Man in a film, and each had been through so much, on and off screen. It was like a Spider-Man therapy session.”

“Because we had done that work ahead of time, when filming that first scene with everyone, it was great to take a step back and see the crew watching, like they were watching the movie. You’re capturing something more than a scene from a movie; you’re watching a once-in-a-lifetime event.”

Was he nervous working with the all-star lineup of Spideys and villains?

“The only thing I was nervous about is that I’d miss something great. As a director, you always keep your eyes and ears open.”

The final act of the film is a culmination of the eight Spider-Man films, including the three directed by Sam Raimi, two by Marc Webb and the trio by Watts.

“I’ve always taken my greatest fear and made that central to the thematics of the films,” he says. “‘Homecoming’ is about a kid who gets a huge opportunity and is so afraid he’ll miss his chance, that he creates a disaster. That was my fear: ‘What if I screw the whole thing up?’ ‘Far From Home’ is about being afraid to make a second movie and screwing things up. Peter Parker is given a mission and he doesn’t want to take a risk. ‘No Way Home’ is about trying to finish this origin story and the responsibility that comes with this. Peter Parker and Spider-Man mean so much to people and I felt that responsibility.”

Watts has had a personal connection to the characters for half of his life. He was born in Colorado and studied at NYU. He was 20 when the first “Spider-Man” film, directed by Raimi, scripted by David Koepp and starring Maguire, opened on May 3, 2002. The emotional wounds of 9/11 were still fresh, particularly in New York.

“Going to see that movie meant so much to me. I’ve always associated Spider-Man with that moment, that healing, cathartic experience.”

His “Spider-Man” is also healing, arriving at the perfect time for audiences. It gives moviegoers a chance to re-embrace moviegoing and relish the film’s humor and spectacle. More important, it deals with loss, sacrifice and personal responsibility, family and friends. It carries the message that everything will be OK. In an era of COVID, these are important thoughts.

Films don’t direct themselves, and they are not directed by committee. So Watts and the film need to be considered.

What do you say Academy voters?