As a little girl, Lindy Lee would lie on the verandah of her family home in Kangaroo Point, Queensland, and draw dust motes dancing in sunlight.

Something of that ephemeral moment of childhood has found its way into her new work of public art, unveiled in the forecourt of the Museum of Contemporary Art at Circular Quay.

More than five metres wide, Secret World of a Starlight Ember is an ellipsis of polished stainless-steel pierced with thousands of tiny holes. 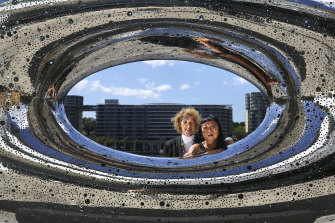 By day it captures the surroundings and the viewer's image dissolves into it, says MCA director Liz Ann Macgregor, reminding us of one of Lee's key concerns: how we are inextricably part of the universe. 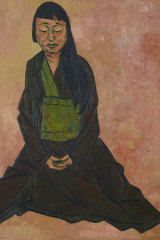 "At night, there is a reversal as the light permeates out through almost 100,000 perforations, like looking up at the night sky with its myriad stars," Macgregor says. "The title refers to the fact that a dying star still sends its light to us thousands of years later."

The ambitious large-scale work forms part of Lee's solo show, Lindy Lee: Moon in a Dew Drop, which opens on Friday. It's the most significant of her career, looking back on 40 years as an artist.

"I wanted to make a sculptural work that would reflect the beauty of the harbour, which is why the form is horizontal with a portal in the centre to facilitate views through," Lee says.

"I couldn't travel to China to fabricate the work so we had to devise a method for me to place the 100,000 perforations. We did this with a polystyrene form; half size and using ink stamps of various circular sizes, we indicated where the holes should be made.

"Then UAP turned this into a digital file to send to their foundry in Shanghai where the work was created. It is panel beaten stainless-steel."

Macgregor says Lee has been enormously influential in the Australian contemporary art scene: as a teacher at Sydney College of the Arts for over 30 years; a founding artist and chair of Gallery 4A; and a trustee of the Art Gallery of NSW for nine years. She was the subject of Tony Costa's Archibald Prize-winning portrait in 2019.

"Her key themes have always been very pertinent: what it means to grow up 'between worlds'; the experience of being the child of immigrants; how we are all connected and part of the wider universe," Macgregor says. "The themes have taken on an special resonance in the light of COVID-19 which has caused a huge amount of disconnection, the rise of racism, and the realisation of our impact on the environment."

Lee says her impulse to create came from wanting to capture the sublime and the ephemeral. In a COVID-19 world, "art connects us, brings us together, inspires us to look beyond the immediate, and hopefully lifts our spirits".

LGBTQ Advocate Phyllis Lyon, Among the First to Have Same-Sex Marriage in Calif., Dies at 95