The pandemic’s put paid to the parties and gilt-edged invitations, but in their place are dazzling digital shows EVERYONE can be part of… Take your front-row seat at London Fashion Week!

Heralding the official start of London Fashion Week (LFW), that small step by the American model will mark a giant leap for Britain’s fashion industry.

This is, after all, the fashion week we feared might never happen.

Some might argue it is brave — mad even — to go ahead during a pandemic. But the alternative — to deny London and its designers its fashion bonanza — could be far worse.

After all, the twice-yearly showcase is an integral part of the UK fashion sector, which in 2019 contributed £35 billion to the economy. Fashion employs more than 890,000 people. Or it did. 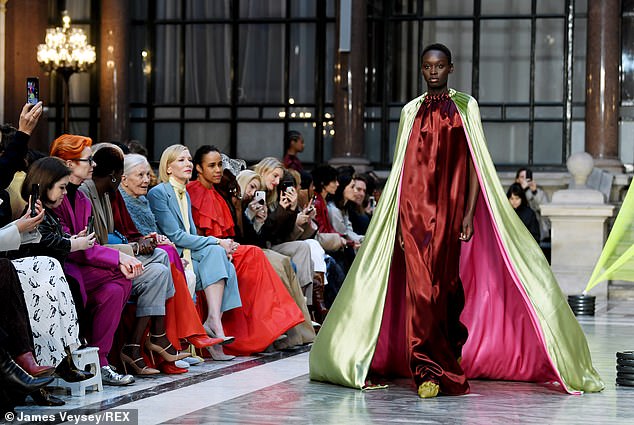 In March, fashion shows, along with life as we knew it, stopped.

From shop closures on the High Street to travel bans, a massive fall in spending from tourists and touch-free photoshoots requiring masked and gloved make-up artists, the nature of the fashion industry means that almost no aspect has been left untouched by coronavirus.

Consumers have undergone a massive shift in shopping habits, ditching suits and heels for more casual outfits to work from home.

Against this backdrop, designers in the capital will, from Thursday, introduce their latest work to international Press, buyers and, in a huge change for the industry, you, the general public.

Signalling the upheaval under way, this new LFW will be open to all as never before.

Gone are the days of gilt-edged invitations and fashion editors elbowing their way to the ‘frow’ (front row).

In this brave new world, digital presentations — think catwalk shows that are streamed live online — are the new normal. And everyone’s invited (digitally, at least).

From Thursday until next Tuesday, anyone can access the official LFW hub (london fashionweek.co.uk), which will be hosting exclusive multimedia content. 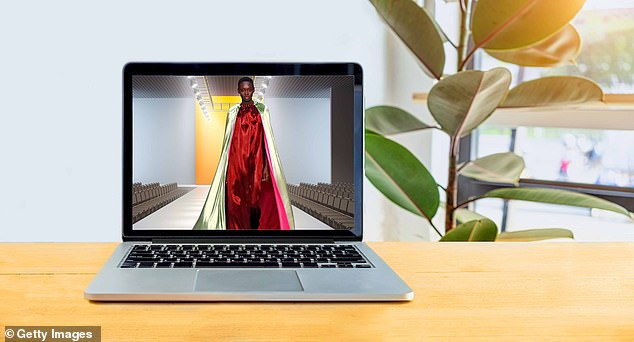 It was feared that this year’s fashion week would never happen because of the coronavirus pandemic. Pictured: How this year’s show might look

While physical audiences will be much reduced, more people than ever before will virtually explore the designers’ work.

You may already consume some of your fashion information from brands posting online, or influencers showing their outfits on Instagram.

These channels of conversation help ping fashion trends around the world — and, in tandem, bring in orders from all four corners of the globe.

Because, for all the glamour and spectacle, fashion shows are actually all about those lucrative orders.

Around £100 million is usually placed during LFW each season from industry buyers shopping for designer stock for high-end department stores, boutiques and fashion websites.

But what really fills the coffers are the more affordable make-up, fragrance and accessories snapped up by the rest of us. And it’s trendsetting fashion weeks that help shift them.

So what can we expect?

He explains the line-up will be a combination of virtual, physical and ‘phygital’ (a bit of both) events by 80 designers — including Vivienne Westwood, milliner Stephen Jones, Roksanda Ilincic and Molly Goddard.

Most (around 50) will be digital-only.

They will look and feel different — the opening virtual show from Burberry, one of the biggest brands to show at LFW, will have no audience; others will see VIPs seated two metres apart. 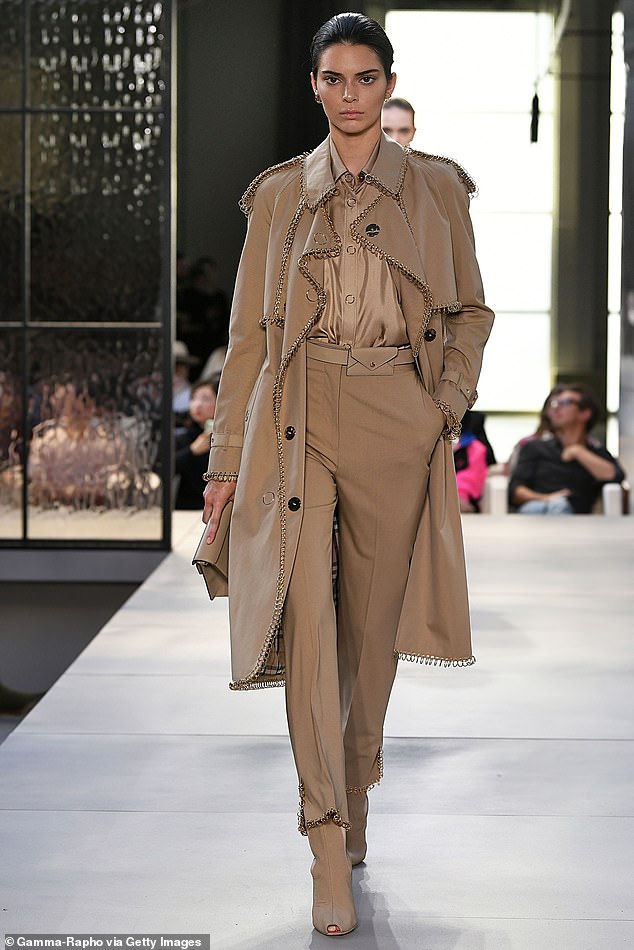 Because the scaled-down show format cannot deliver the usual ‘wow factor’ many, including Victoria Beckham, have created digital films to dazzle, too.

This all comes in stark contrast to the usual 50 to 100 shows staged over six days during LFW, where designers out-do each other in choosing extraordinary venues, from car parks to gin palaces, and hundreds of bodies cram into a tight space.

‘Extravagant fashion shows must be produced on a modest scale,’ says Dylan. ‘This is not the time to go guerrilla and try to do crazy things.’

LFW receives government funding and its parent, the BFC, has been ensuring safety measures are intact.

Halted supply chains and factory closures have meant many Autumn/Winter 2020 styles have yet to be put into production, let alone arrive in stores.

Meanwhile, without international Press in town to witness them, justifying the expense of traditional shows is harder.

Since March, the BFC has lobbied the Government to do more for fashion, including putting further policies in place to protect manufacturers and designers facing order cancellations.

‘The Government could move faster than what they are doing,’ says Dylan. ‘The current travel restrictions don’t work.’

Until a month ago there was still an appetite from European buyers to attend LFW in person, but when quarantine rules were announced for arrivals from key fashion markets — including the world’s largest, China, followed by the U.S. — those plans were shelved.

And just as London was returning to its 1980s glory days, too.

Yet even if London could have gone ahead with its schmoozing events, already change was in the air.

Before the pandemic, the rigid six-month catwalk-to-shop lead time (the time it takes ready-to-wear catwalk collections to be ordered, made and delivered to shops) of Paris, Milan, New York and London had begun to break down. 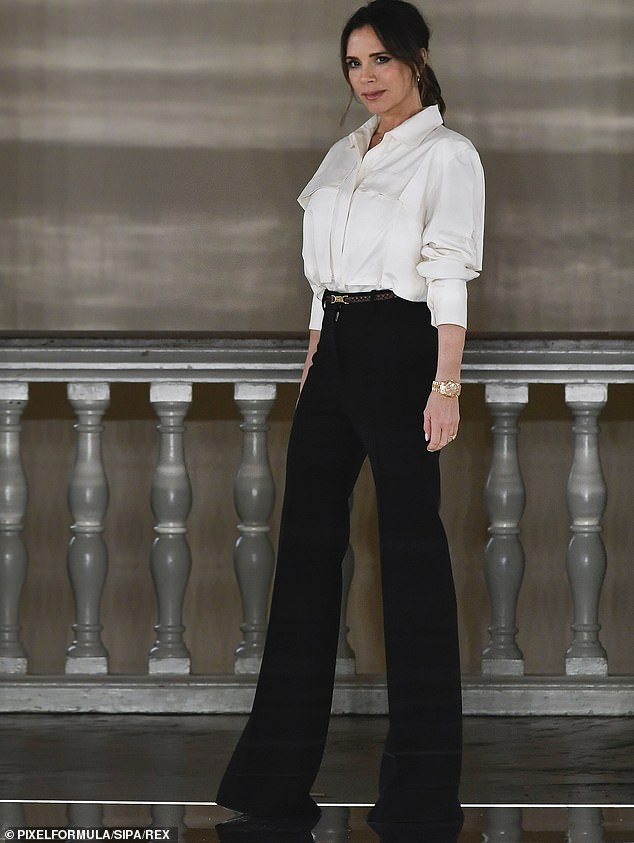 Because the scaled-down show format cannot deliver the usual ‘wow factor’ many, including Victoria Beckham, have created digital films to dazzle, too

Shoppers wanted to wear what they saw on models now.

Menswear and womenswear, once segregated, had begun to morph into one, with designers including Gucci, Saint Laurent and Burberry parading men’s and women’s in the same show.

As for focusing collections on the traditional fashion seasons — Spring/Summer and Autumn/Winter, each shown six months ahead of time — LFW September 2020 will not even specify the clothes being displayed are Spring/Summer 2021, as they normally would.

The way we dress now rarely involves packing away wardrobes every six months.

This accent on low-cost, tradition-busting, digital shows may well be to London’s advantage.

‘Young designers prefer to use LFW than fashion weeks in their own country,’ says Martyn Roberts, who runs Fashion Scout, an independent, avant-garde platform that offers an alternative to the BFC schedule and hosts international designers.

This year Fashion Scout is digital-only, with no physical shows at all. Making her debut that way is Didi Akinyelure, a Nigerian/British designer whose brand is called April & Alex.

‘Our big plan for 2020 was to launch a pop-up store in [London shopping mall] Brent Cross in April and we were ready to go,’ she says — before lockdown ended that dream.

However, her digital presentation (documenting the fashion shoot for her ‘look book’, photos taken to showcase a designer’s outfits), she says, ‘will reach a wider range of people who traditionally may not have been able to attend; so that in itself is exciting’.

Amanda Wakeley, an established fixture of LFW, has also been heavily impacted. ‘In lockdown I had to give 80 per cent of my time to my online business rather than my five retail stores,’ she says.

She began writing blogs for her website, telling the story of each piece of clothing to entice customers.

Happily, it increased sales. ‘I wanted to make every piece celebrated,’ she says. ‘The old wholesale way of selling clothes six months ahead is broken. It’s not how my customer wants to shop.

‘She is not interested in buying a winter coat in May when she is thinking about Ascot.’

Caroline Rush, chief executive of the BFC, says: ‘It is essential to look at the future and the opportunity to change, collaborate and innovate. 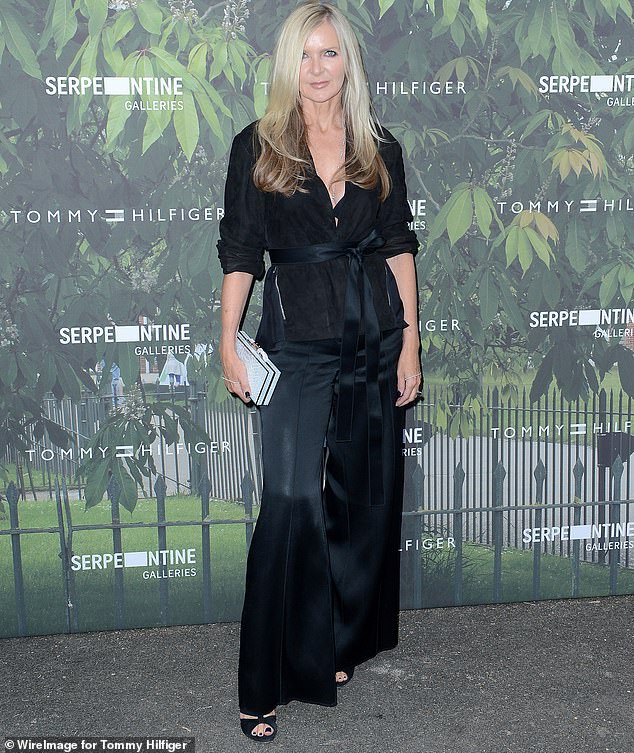 Amanda Wakeley, an established fixture of LFW, has also been heavily impacted

‘The past few months have proved the importance of resetting.’

With no fashion circus in town, does that mean the days of American Vogue’s Anna Wintour sweeping into The Ritz trailing six Louis Vuitton trunks is over?

Show producer John Walford, who worked with Vivienne Westwood in her heyday at LFW, is reluctant to accept the traditional fashion show is dead.

‘When I started doing catwalks in 1985 I was told this. It never happened.’

Martyn Roberts adds: ‘Fashion films can’t replace physical events. But to the 99.9 per cent who never got a front-row seat for a show, to watch on a laptop is intriguing.’

As for those LFW shows which do take place in more traditional form, fashion author Gill Stark expects the smaller ‘salon’ shows, such as Victoria Beckham’s, will resemble those of the 1800s, where super-wealthy clients would have watched local models.

‘I always preferred intimate salon-type shows where the audience could get up close to the models,’ says British couture designer Bruce Oldfield, part of the original line-up in the 1980s.

This season may yet herald a renaissance, with a swing away from excess to sustainability.

In the meantime, the message is that the show will go on.

As Dylan Jones says: ‘London is not just about fashion shows, it’s about parties, dinners, social interaction and it holds up an example of genuine diversity.

‘London has a much bigger flag to wave than anyone else.’

About this time every year I stand in front of my wardrobe and plan what I am going to wear when London Fashion Week revs into action.

I will already have spent most of my month’s salary ‘topping up’ my clothing repertoire — a new pair of shoes, a bag, perhaps some trousers with a nice little detail.

The idea is that this will take me all the way from London Fashion Week right through to the first week in October, when Paris Fashion Week closes. 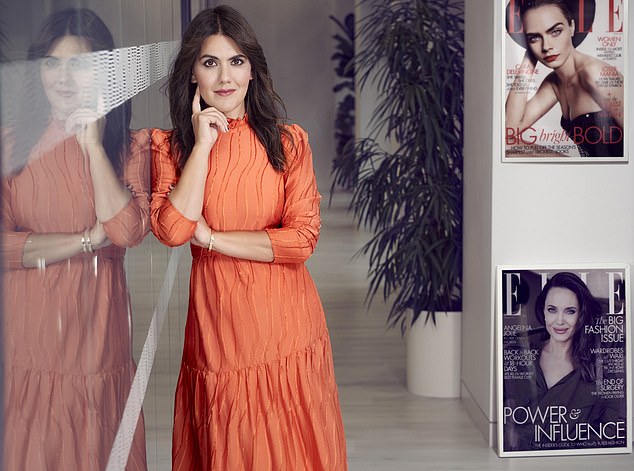 But not this year.

Because the three weeks of the year when fashion editors, buyers and influencers from across the globe collide looks quite different this time around.

Certainly no foreign Press will be travelling to London, because who wants to get on a plane right now?

And there will no crowded shows to be seen at. Which means there will be no photographers and thus no influencers pulling poses in the middle of the street.

The fashion Press famously slink around town in black Mercedes.

It’s where we huddle together, catch up on gossip and eat Percy Pigs. But this year it’s one person per car, and no glossy branding. 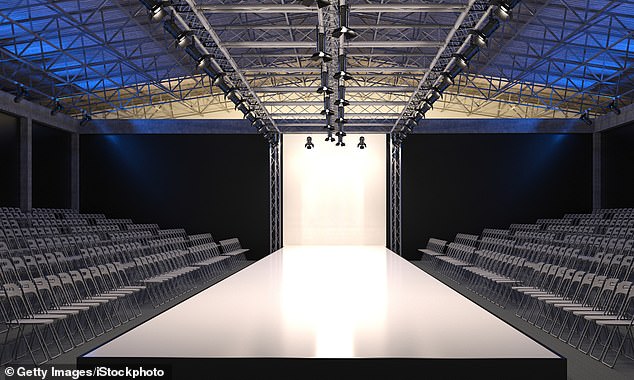 Elle has a strict one-person-per-event policy, so where I would usually travel with my team, I will go alone.

Burberry is doing a digital show, so I’ll probably watch that in my cashmere joggers at home.

Simone Rocha is doing one-on-one presentations. As is Molly Goddard and Alice Temperley.

There are whispers Victoria Beckham may find a way of staging ‘something’ that abides by the new Covid rules.

My schedule, which is usually characterised by a raft of dinners, post-show drinks and parties that linger long into the night, is very small and still with many question marks.

And there are no dazzling parties.

There is still, I suspect, every chance LFW will in the end be watched from behind my computer screen on my kitchen table.

And the ‘frow’ (front row) will simply be me and my two dogs watching clothes I pray the world can go out and wear in six months’ time.

Elin Hilderbrand to retire from writing beach reads in 2024