"We're growing our product base." So said a football code official on the news as I headed to this production. 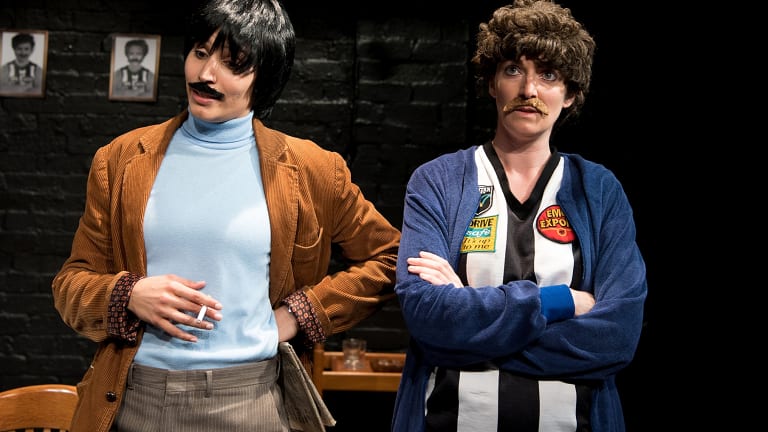 Louisa Mignone and Ellen Steele in The Club.

The words encapsulate how much has changed since David Williamson wrote his 1977 satire about a once-proud football team facing encroaching commercialism.

Back then, football – specifically VFL – was yet to be spoken of in the oleaginous words of marketing gurus.

What has not changed is ugly, aggressive male behaviour. And this is to the fore of this radical all-female production. This is Williamson as you've never seen him before.

When toxic masculinity is under examination, the idea of gender-swapping the roles in a play written for six men sounds intriguing.

Set in the boardroom of a football club, the once-proud team hasn't won a premiership for 19 years. Jobs are on the line.

Pulling the strings is administrator Gerry, the new breed of "professional" whose chief talent is playing one figure against another.

There are giant egos, point-scoring, old versus new guard and tribalism. It sounds like the Federal Liberal party.

The cast of this shoestring production is reduced to three, entailing some energetic doubling. The women impersonate men, with much manspreading, swaggering and stick-on moustaches.

But the realisation reduces the piece to slapstick, relying on sight gags, wig-swapping and inflatable penises for laughs. The result is that some of the most astute observations drown under the weight of silly walks.

Violence against women is one of the darkest elements in the play and this resonates most in Tessa Leong's production.

Then – as now – women are pawns in a game played by men to outmanoeuvre each other. None more so than in the way Ted's violence towards a stripper is used to knife Jock.

The three actors work hard to create their multiple characters in the first half, Louisa Mignone (as Gerry and star recruit Geoff – played with a dash of Warwick Capper), Ellen Steele (Laurie and mullet-haired striker Danny) and especially Jude Henshall (as Ted/Jock).

But this all goes off the rails in the second half which descends into utter confusion. Roles and genders are swapped back and forth before the three briefly don masks of prominent sporting figures wearing white ribbons in support of prevention of violence against women.

There are unsettling ideas being kicked around, but in the chaos and pursuit of easy laughs these fall wide of the mark.

White professor who said she pretended to be Black won’t be teaching this fall, university says

This $32 Coach Wristlet Will Have Everyone Going Hands-Free