Shattered mirrors, red herrings and small details that matter more than large ones. There is an art to the whodunit that is evident in the first frames of Susanne Bier's The Undoing, with its grey skies and dead tree limbs, intended to conjure a world where everything is shrouded in the winter mist and nothing is certain.

At the beating heart of this story sits Grace Fraser (Nicole Kidman) the kind of therapist who, if she lived on America's west coast, would have a syndicated talk show and an Instagram following in the millions. In New York, however, she is bolted more simply to the cobbled pavement and the large – read: expensive – home she shares with her doctor husband Jonathan (Hugh Grant) and their son Henry (Noah Jupe). 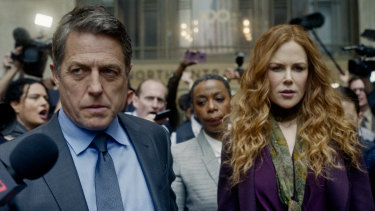 Did he? Did she? The biggest question in The Undoing is which one of them dunit?Credit:HBO/Foxtel

This elegant reflection of a slightly unreal life, gently distorted and styled to the max, shimmers a little before shattering completely by the end of the first episode. Bier, whose directorial touches come from Denmark and a style that gave the world Nordic television noir, builds her spaces with great economy. Which is not to say they are not detailed, but there is very little in the frame that is superfluous.

Instead, every detail here matters. If you're a shrewd viewer and you're invested in the whodunit aspect of the series, then you should be taking notes. As with Twin Peaks, The Undoing meanders from its hypnotic theme – Dream a Little Dream of Me, sung by Kidman – into the narrative like an animated oil on canvas. And once there, Bier's brushstrokes pause on the smallest of things that seem not to matter but which, by the penultimate episodes, could be the detail on which the entire story pivots.

Early in the first episode Grace cautions one of her patients for seeing what she wants to see, rather than what's actually in front of her. As it turns out it's good advice, it's just a shame Grace doesn't take it herself. As the mirror begins to splinter on the perfect picture of her life, what is left looks like something else entirely.

Reactions to the series have been mixed. Some reviewers dislike it, others are passionately entangled in its mystery. Too many have tried to find comparisons to Kidman's previous collaboration with screenwriter David E. Kelley, Big Little Lies. But such comparisons are at best lazy. The Undoing has no more in common with Big Little Lies than it does with Ally McBeal or Eyes Wide Shut. 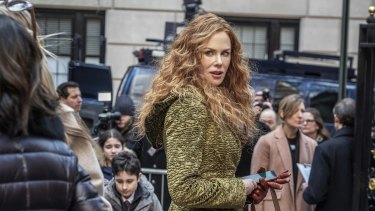 Grace (Nicole Kidman) in The Undoing.Credit:HBO/Foxtel

Which brings us to the question of who, actually, dunit. Mid-way though the first episode the sensual but uncertain Elena Alves (Matilda De Angelis) is found dead causing the pendulum of suspicion to swing in the direction of Grace's husband Jonathan, largely because there are some volcano-sized cracks in his story.

At the same time, however, Bier effortlessly waves the wand of suspicion in every direction. Watching the series through once leaves you with a raft of clues. Staggeringly, watching it through a second time seems to unearth even more. And as each piece of the jigsaw slowly falls into the place, you dance along the precarious line of suspecting almost everyone in the frame.

Only five of the six episodes were released to reviewers, and this review makes no detailed references beyond the first episode. You know, spoilers and all that. Having watched all five we might be able to shoot a guess with better aim than most but if anyone is poised to pull the rug out from under all of us, it would be Bier, who delights in such narrative mischief.

Perhaps the last word on how the genre plays out should go to Lionel Twain, an eccentric billionaire in Neil Simon's homicidal masterwork Murder By Death, who gathers the world's leading fictional detectives into his home with the explicit purpose of exposing them as frauds. 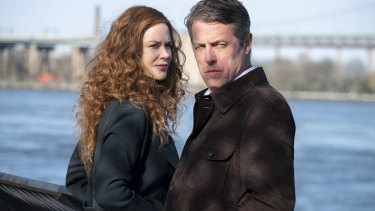 Grace (Nicole Kidman) and Jonathan (Hugh Grant) in The Undoing.Credit:HBO/Foxtel

"You tricked and fooled your readers for years," Twain rants at them. "You've tortured us all with surprise endings that make no sense. You've introduced characters in the last five pages who were never in the book before. You withheld clues and information that made it impossible for us to guess who did it."

Pushing all of those red herrings to the side, knowing how Bier assembles the illusion painstakingly, piece by piece, and tapping into the theme of the original work itself – the novel You Should Have Known, by Jean Hanff Korelitz – it's clear that the biggest clue is in that title.

The murderer is already hiding in plain sight. It's just a matter of guessing who.

The Undoing streams on Binge.