The booming feral horse population in Kosciuszko National Park could be removed if federal Environment Minister Sussan Ley succeeds in her bid to override the NSW government’s management of the fragile alpine environment.

Ms Ley is searching for a legal avenue for the federal government to force the state to reduce the population of the damaging pest animal, after she flew over the park and saw the “ground was moving with horses”. 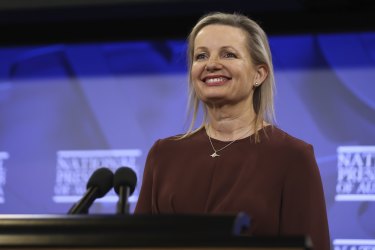 Federal Environment Minister Sussan Ley is searching for a way to use Commonwealth powers to intervene in NSW’s management of Kosciuszko National Park. Credit:Alex Ellinghausen.

The feral horse population in the park has exploded over the past 20 years, rising from just 1500 to 14,000. NSW passed a law in 2018, under pressure from Deputy Premier John Barilaro, that vetoed the culling of feral horses in the park.

Ms Ley said she had been surprised at what she saw in Kosciuszko when her plane flew over the park last year, and she was now combing legislation looking for a mechanism that grants her legal rights to force the reduction of feral horses in the fragile alpine landscape.

“I looked down and the whole ground was moving with horses and (saw) the damage to the montane heath of that fragile ecosystem,” Ms Ley said at the National Press Club in Canberra on Wednesday.

“I’m looking through the EPBC Act, I’d love to find permission in there that could actually allow the Commonwealth to have a say in a heritage-listed National Park.”

The Commonwealth Environment Protection Biodiversity Conservation Act makes the federal government responsible for threatened wildlife. Kosciuszko is home to a range of them being trampled by horses, including 23 native alpine plants, the corroboree frog, alpine skinks and crayfish, and five entire ecological communities including Sphagnum moss wetlands.

Invasive Species Council chief executive Andrew Cox said NSW “deserve an intervention because they’ve shown that they can’t address it” and the federal government’s move “would be historic but necessary”.

Ms Ley said she would prefer to work with NSW on horse management “because we must collectively do more”, but called for more public pressure on the issue.

“I appeal to everyone who feels strongly about this issue to make their voices heard.”

Since culling was banned, park managers have focused on trapping feral horses and rehoming them with private owners, but many of the horses captured are released back into the park. Victoria and the ACT cull feral horses.

Of the 918 feral horses trapped in NSW between July 2020 and April this year, 315 have been released back into Kosciuszko and 603 have been rehomed. Most of the released horses were mares and foals that will return to breed with the wild herds.

Mr Barilaro told NSW Parliament in February that NSW should set a target to reduce horse numbers by 11,000, in the near term, and said achieving a population of 3000 would be “significant”.

NSW government is expected to release for consultation a new draft management plan for feral horses in coming days, but it remains to be seen if the plan will allow culling.

The Tokyo 2020 Olympics should be postponed by a year, Japan's prime minister said, in the clearest signal yet that coronavirus will delay the games