There are almost 3800 flower arrangers in Australia but Adam Beehre from Melbourne is a rare specimen. He is one of just 234 men whose main job is floristry.

The 28-year-old has been in the industry for six years and opened the Sandringham shopfront for his business Adam The Flower Man three years ago. “I don’t know too many other male florists,” Beehre says. “I was the only male in my class.” 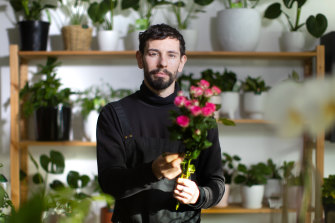 Adam Beehre isn’t sure why more men don’t take up floristry but says he is glad to offer something different to clients.Credit:Simon Schluter

His study experience is borne out in statistics released this week by the Australian Taxation Office. In 2018-19, there were 197 women whose main income was from a floristry apprenticeship and 24 men.

This cohort of women out-earned their male apprentice equivalents, with an average annual income of $20,326 compared to $14,327.

The pattern of women’s earnings outstripping men’s during apprenticeships but falling behind afterwards also emerges in the data for veterinary nurses, telecommunications technicians, jewellers, beauty therapists and electricians. While this doesn’t hold true for apprenticeships in all sectors, the earnings gap between female and male apprentices is typically much smaller than at later points in the workforce.

Beehre isn’t sure why more men don’t take up floristry but says he is glad to offer something different to clients, particularly men who may find choosing flowers daunting or uncomfortable. “It helps bridge the gap,” he says.

In 2018-19, men’s average taxable income was $73,218 compared to $51,382 for women. These figures include all earners and women are more likely to work part-time, including to look after children, which can exacerbate the gap.

The federal government’s Women’s Budget Statement released last month says the gender pay gap is the result of many factors, including job choice. Cultural barriers, time out of the workforce to care for children and general workforce participation also have an effect.

“[The gender pay gap] is observable within almost every industry,” the statement says. “Female-dominated industries and occupations do typically attract lower pay than male-dominated ones.”

Two women working in a male-dominated industry are Jude Hartnett and Melissa Hardwicke from TLC Mobile Autocare in Sydney, an all-female team providing mechanical repairs and servicing. The couple set up the business six years ago and have grown from 80 to 1700 clients in this time.

Hartnett, who previously worked as a cement truck driver and the only woman in a depot with 30 men, says male-dominated industries can be difficult for women who face bullying or are treated like they know less than their male peers.

“We can do as good a job if not better than any male out there,” she says. “But if Mel [who is a mechanic] went for a job and it was between her and a male with the same experience unfortunately it’d always go to the male,” she says.

By having control over the business, they are able to have more say over their income and have had success catering to women.

A recent KPMG report found industrial and occupational segregation, where women are over-represented in lower paid roles and sectors, accounted for 17 per cent of the overall gender pay gap in 2017. Unpaid work, such as housework, contributed 7 per cent of the gap and part-time work patterns had a 6 per cent effect. Time off, typically to look after children, contributed 25 per cent of the gap and gender discrimination was found to be the biggest factor at 39 per cent. Other factors such as age, tenure with an employer and the type of employer had smaller impacts.

A report from Chief Executive Women and consultancy firm Bain & Company released on Tuesday said providing more flexibility would help improve women’s workforce participation and should be considered a business imperative. The report noted this was one of many factors that would have a meaningful impact, and affordable childcare, unpaid care responsibilities, the pay gap and sexual harassment in the workplace were also significant barriers.