TOM UTLEY: I’m so befuddled by emojis that I often send one that hints I’m either bisexual… or a billionaire

Oh Lord, what have I done? Many months ago, a friend sent me a WhatsApp message in which she had inserted an emoji of a unicorn mid-sentence, for no good reason that I could discern.

When I asked her what she was trying to say, she replied that she had sent it by accident (don’t ask me how that can happen).

I messaged back, saying: ‘I know. These ruddy unicorns get everywhere, don’t they?’ And we left it at that. 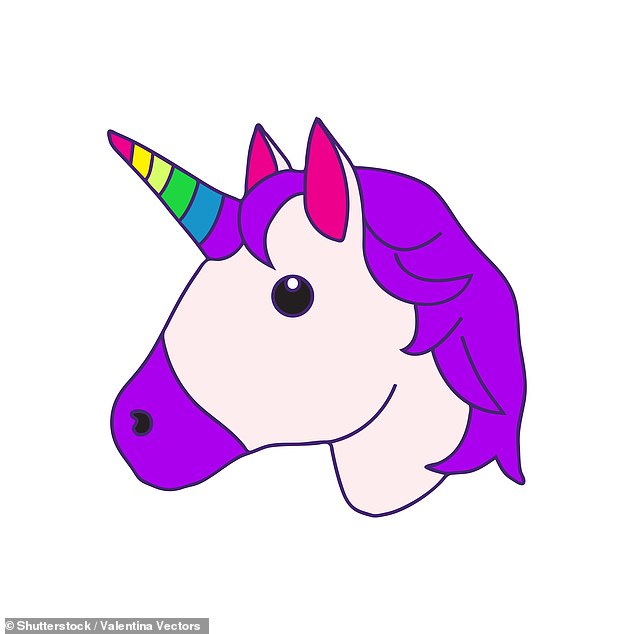 Many months ago, a friend sent me a WhatsApp message in which she had inserted an emoji of a unicorn mid-sentence, for no good reason that I could discern 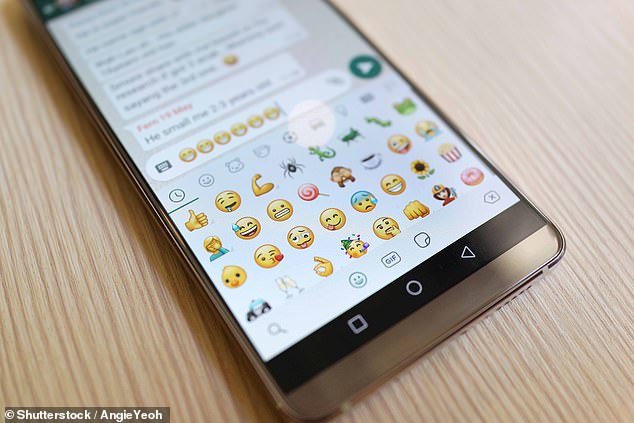 Since then, I’ve taken to peppering my messages to my friend with unicorn emojis, as an affectionate in-joke. The trouble is that I’ve also got into the habit of sending unicorns to other people, adopting them simply as an idiosyncratic sign-off

But this wasn’t quite the end of the story. Since then, I’ve taken to peppering my messages to my friend with unicorn emojis, as an affectionate in-joke. The trouble is that I’ve also got into the habit of sending unicorns to other people, adopting them simply as an idiosyncratic sign-off.

It was only yesterday morning, when I was doing my research for this column, that I took the trouble to look up what a unicorn emoji actually means, in the strange (to me) sub-culture of the internet.

‘The unicorn face emoji shouts “Sparkles and magic and rainbows!”,’ says dictionary.com. ‘It can express anything bright and sparkly, from fashion styles to whimsical moods.’ So far, so innocent.

But it goes on: ‘It can also refer to the unicorn in the gay community (a kind of bisexual person) and a unicorn in startup culture (a $1 billion valuation).’ Well, who would have thought it? Not I.

More from Tom Utley for the Daily Mail…

The embarrassing possibility occurs to me that some recipients of my messages — particularly those of my sons’ generation — may think that by signing off with a unicorn, I’m either coming out as bisexual or declaring myself to be a billionaire entrepreneur. All I can say is that neither has ever been my intention.

The moral, I suppose, is that people of my age (I’m 67) should be extremely wary of using emojis, no matter how much we want to seem ‘down with the kids’, unless we’re 100 per cent confident that we know their significance.

This sobering thought was brought home to me by an item on the BBC Today programme this week, which claimed that many young people regard the smiley face emoji as an outrageous insult.

I don’t know about you, but I was astonished.

In my book, a smiley face is about as bland and inoffensive as an emoji can get, suggesting nothing but friendly goodwill.

It seems I couldn’t be more wrong. According to the Guardian — the Bible of Radio 4’s flagship news show — ‘nothing says “I hate you” more than a smiley face emoji’.

Only half in jest, the paper goes on: ‘It’s a tool of passive aggression and dismissiveness. A smiley face emoji at the end of a message is a patronising pat on the head from somebody who wishes you nothing but ill fortune.’ For good measure, the Guardian warns that the yellow smiley has become a symbol of ‘unbridled consumerism’ since its invention in 1963 to promote a life assurance company.

As it happens, I’ve long found smiley faces slightly irritating, but this is not for the reasons outlined by the BBC and the Guardian. Rather, my dislike of them dates from our sons’ time at their state primary school.

In those days, one or two of their teachers would give them back their homework with no marks or corrections — littered though it was with spelling mistakes and grammatical howlers — but only a drawing of a smiley face at the bottom.

I don’t believe those teachers meant to be patronising or passive-aggressive, let alone to say anything about consumerism. They were either plain lazy or, more likely, they were afraid that by pointing out their pupils’ mistakes, they might set them back by damaging their precious self-esteem.

Call me an old-fashioned brute, but I’ve never thought teachers do their pupils much service by bestowing praise and smiley faces where they’re undeserved.

More recently, I’ve found those emojis annoying because so many of my nearest and dearest like to send them to our family WhatsApp group, the only social media platform I use, in response to messages or photographs posted there.

I find it exasperating when my iPhone goes ping and I dig it out of my pocket, in the hope of seeing more pictures of the grandchildren or reading more family news — only to see yet another wretched smiley face, a throbbing heart or ‘face with tears of joy’, posted by a loving cousin or aunt.

Mind you, I fully understand why people send them. It seems rude not to acknowledge receipt of a photograph or a message — and an emoji of a heart or a smile says all that really needs to be said.

But when a dozen or so friends and relations are in the same group, all of them sending nothing but emojis, the pinging drives me half mad.

Until I heard the Today programme, however, it simply hadn’t occurred to me that a smiley face could actually be intended as an insult (though I’m certain that all those cousins and aunts have never meant any such thing). But then nor did I realise that an emoji of a skull, with or without crossbones, is taken by young people to mean: ‘That’s so funny that I’ve died laughing!’

Indeed, the language of emojis turns out to be a veritable minefield for the uninitiated. 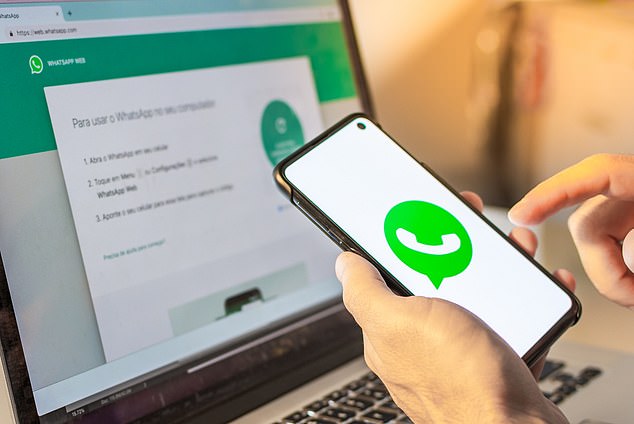 Indeed, the language of emojis turns out to be a veritable minefield for the uninitiated

Did you think an aubergine was merely an innocuous ingredient of moussaka or ratatouille?

Beware! To the smutty-minded young, the emoji means something very rude indeed. The same goes for the peach emoji.

Suffice it to say that whatever you do, don’t send emojis of peaches and aubergines side by side.

And did you know that an emoji of a fairy can be taken to mean: ‘Everything I’ve written in this message is intended ironically, and shouldn’t be taken seriously’? I didn’t. I thought it signified nothing more than a Christmas tree decoration.

No, it’s wisest, I reckon, for old folk like me to avoid sending emojis altogether. Either that, or risk giving serious offence to the sensitive young, many of whom seem to delight in taking offence where none is intended.

But then if emojis are ruled out, the tricky question arises: What is the safest way to top and tail a message, in the age of the internet?

Even good old-fashioned abbreviations can land us in trouble. Take the woman who sent a text message to her baffled teenage daughter, thinking that LOL stood for lots of love: ‘Very sad to tell you that Grandad died this morning, LOL’.

As for those like me who have been known to sign emails ‘love from Tom’, all I can advise is that you should be extremely careful. Unless you’re very sure that the old formula won’t be taken amiss, you could find yourself up before the beak for sexual harassment, or worse.

Just ask David Cameron, who made the big mistake of signing his begging messages to former Cabinet colleagues with the words: ‘Love Dc’. It was unseemly enough for him to be lobbying them in the first place on behalf of his dodgy paymasters at Greensill. How much worse that he couched his appeal in the language of personal affection. 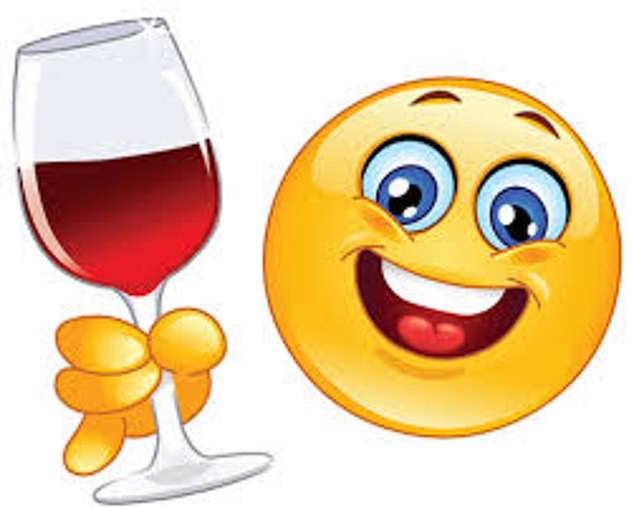 Indeed, if I’ve learned anything this week, it’s that emojis are a language I will never understand

Yet all the old conventions of letter-writing — ‘yours faithfully’, ‘yours sincerely’ or ‘yours ever’ — look wrong on a text message. So if not ‘love’, then what?

For what it’s worth, I reckon it’s safest to reply to a message with the same formula as that used by the sender. Thus, if you address me by my first name, I’ll answer with yours; if you send me ‘best wishes’, you’ll get mine back. The same goes for ‘kind regards’, ‘bestest’ or even ‘pip pip’.

But one thing I’m very sure of is that there’ll be no more unicorns from me.

Indeed, if I’ve learned anything this week, it’s that emojis are a language I will never understand.

What is prostate cancer? Signs and symptoms of the condition – The Sun