Last week GM announced it would cut about 14,000 jobs in the politically vital swing states of Michigan and Ohio.

This doesn’t quite square with the giant $1.5tn tax cut Trump and the Republicans in Congress enacted last December. Its official rationale was to help big corporations make more investments in America and thereby create more jobs. Trump then told Ohio residents “don’t sell your homes”, because lost auto-making jobs “are all coming back”.

GM got a nice windfall from the tax cut. The company has already saved more than $150m this year, according to GM’s latest financial report. But many of those Ohio residents probably should have sold their homes.

Trump is (or is trying to appear) furious – tweeting up a storm of threats against GM, including taking away its federal subsidies.

‘No jobs on the horizon’: workers respond to General Motors’ decision to close plant

In reality, GM gets very few direct subsidies. Prior to the tax cut, the biggest gift GM got from the US government was a bailout in 2009 amounting to more than $50bn ($11.2bn of which is still outstanding).

But neither last year’s tax cut nor the 2009 bailout required GM to create or preserve jobs in America. Both government handouts assumed that, as the former GM CEO Charles Erwin “Engine” Wilson put it when he was nominated secretary of defense by Dwight Eisenhower in 1953, what was good for GM was good for America.

Moreover, in the 1950s, a third of America’s workforce was unionized, and GM was as accountable to the United Auto Workers as it was to GM’s shareholders. That’s why, in the 1950s, GM’s typical worker received $35 an hour (in today’s dollars).

Today, GM’s typical American worker earns a fraction of that. The bargaining clout of the United Auto Workers has been weakened not only by automation, but also by the ease by which GM can get cheaper labor abroad.

In 2010, when GM emerged from the bailout and went public again, it boasted to Wall Street that it was making 43% of its cars in places where labor cost less than $15 an hour, while in North America it could now pay “lower-tiered” wages and benefits for new employees.

So this year, when the costs of producing many of its cars in Ohio and Detroit got too high (due in part to Trump’s tariffs on foreign steel), GM simply decided to shift more production to Mexico in order to boost profits.

In light of GM’s decision, Trump is also demanding the company close one of its plants in China. But this raises a second reality of shareholder-first global capitalism that has apparently been lost on Trump: GM doesn’t make many cars in China for export to the United States. Almost all of the cars it makes in China are for sale there.

In fact, GM is now making and selling more cars in China than it does in the United States. “China is playing a key role in the company’s strategy,” says GM’s CEO, Mary Barra.

Even as Trump has escalated his trade war with China, GM has invested in state-of-the-art electrification, autonomous vehicles and ride-sharing technologies there. 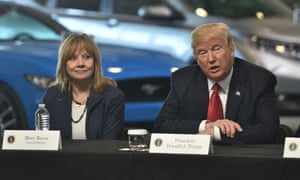 Which brings us to a third fallacy behind Trump’s “America first” economic nationalism. Trump accuses China of stealing technology from American businesses, but big American corporations like GM are eager to invest in China notwithstanding. Their Chinese investments still generate huge profits.

In shareholder-first global capitalism, technology doesn’t belong to any nation. It goes wherever the profits are. If a particular technology is vital to American national security, the US government could stop American corporations from doing business in China – just as it does, in effect, when it blocks Chinese companies from acquiring American components if the purchase poses a national security threat.

The real challenge is to make American workers great again. They don’t need just any jobs. They need good jobs, akin to those that GM’s unionized workers had a half-century ago. Most Americans haven’t had a raise in decades, considering inflation.

The difference between China and America is that big Chinese companies are either state-owned or dependent on capital from government-run financial institutions. This means they exist to advance China’s national interests, including more and better jobs for the Chinese people.

American corporations exist to advance the interests of their shareholders, who aren’t prepared to sacrifice profits for more and better jobs for Americans.

Even if it were aimed at the right things, Trump’s “America first” economic nationalism wouldn’t stand a chance in the land of shareholder-first global capitalism. If he were serious about his aims – a highly dubious condition – he’d do better trying to reduce the chokehold of Wall Street investors on American corporations while strengthening the hand of American labor unions.