Australians are driving up the price of used cars at record rates, taking advantage of the cheapest petrol prices in two decades and big incentives for businesses buying equipment and vehicles amid health fears about using public transport.

While new car sales have dived, demand for used vehicles is now so high prices for second-hand cars have jumped 25 per cent above what they were in August 2019 according to Moody's Analytics data, which tracks transactions at car marketplace Pickles. 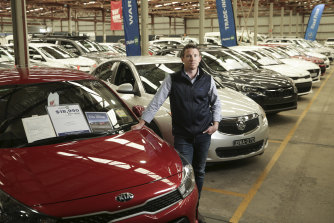 This is a record annual growth rate, surpassing a previous 20 per cent price rise in December 2009 following the global financial crisis, and comes after a smaller drop in values at the height of the coronavirus pandemic than during the GFC.

"The increased demand for vehicles is coming from people who have continued to shun group mobility," Moody's analysts said in a research report. Similar trends have also been recorded in other wealthy locations such as the US and Europe.

"This change in preference has been in response to fear of contracting the virus or, in some cases, not wanting to deal with the hassles of increased precautions."

Wholesale used vehicle prices jumped 7 per cent in August following a 4.7 per cent rise in July, reflecting a record surge of interest at auction houses for secondhand cars.

The wholesale passenger-car market was up 23 per cent and ute prices have increased by 32 per cent breaking a period of flat and falling values over 2018 and 2019.

Part of this was described in the report to be due to lower petrol costs during the downturn, which improves the overall cost of ownership more significantly than less fuel-hungry cars.

Pickles general manager for motor vehicles Brendon Green, who said the business had seen record high buying activity, said buyers were looking for ways to avoid the train and bus on their commute without needing to spend big on a new vehicle.

"We anticipate that used car prices and sales will remain quite high for some time – possibly right through 2021," Mr Green said.

"We always find buyers gravitate to used vehicles during difficult economic climates or when consumer confidence is low as they are watching their budget."

The government's more generous instant asset write-off policy, which was increased five-fold to $150,000 in March for all businesses with a turnover of up to $500 million, also encouraged the purchase of light commercial vehicles and utes, he said.

Pickles branch manager for Canberra, Liam Baverstock, said there has been a drop in used cars available for sale, which has helped push up the prices, but he expects an increase in forced sales next year.

"We can see from speaking to our clients there will potentially be an increase in repossessions come early-2021, which would naturally involve a lot more high-end vehicles as well as standard run of the mill [cars]," Mr Baverstock said.

Fitch Ratings data for the second quarter of the year found a record high measure on the index of borrowers falling behind on car payments by more than 30 and 60 days, despite help from lenders and the government.

At the end of July about 7.7 per cent of the portfolio of those with outstanding car payments were given assistance for pandemic-related hardship.

Mr Baverstock said SUVs and four-wheel drives had also been in particularly high demand from people planning local holidays instead of overseas trips.

CarSales chief executive Cameron McIntyre said the slowdown in used cars for sale was because households are holding onto older vehicles and adding others to their fleet, as well as buying them for their kids.

"Supply side issues with new cars are causing people to buy used … in some cases there's a wait of three to four months," he said, adding supply chains have been disrupted and factories facing restrictions causing it to take longer to build vehicles.

"Used supply is now tightening up, which is frustrating dealers, but as used car prices go up and get closer to new car [prices] buyers might go back to new."