Want a new outfit for every occasion? Just swish* one! That’s the fashionably green trend for clothes swap parties — where you trade unwanted pieces for a new look

Tucked away in the labyrinthine corridors of the House of Lords, Committee Room 2A has hosted much serious political discussion over the centuries.

But not quite so long ago, it played host to a group of women meeting to talk about fashion — and to swap clothes. Not all were Conservatives like myself. The MPs, peers and parliamentary staff came from across the political spectrum.

What we shared was a desire to look good without damaging the planet, and to make our fashion more environmentally friendly by resisting the urge to keep buying new clothes.

‘Swishing’ (that’s clothes swapping) parties are a fun and sociable way to get hold of good quality garments that have plenty of use left in them without spending a penny. 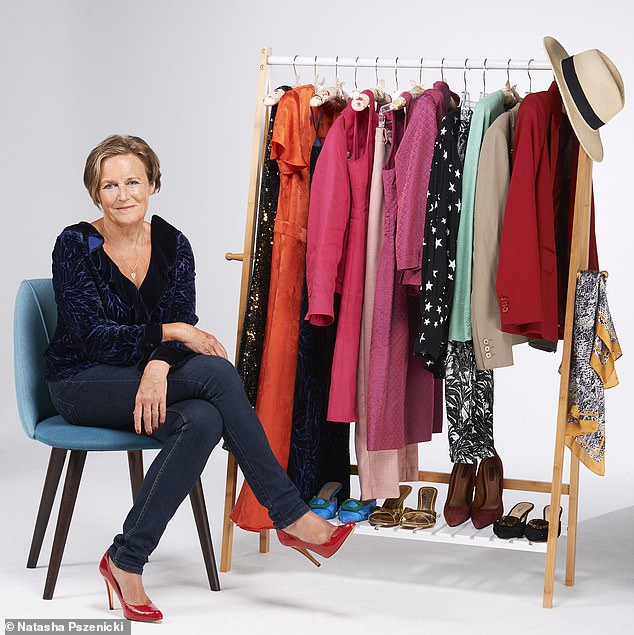 According to a 2018 study, as much as 70 per cent of clothing in British wardrobes is almost never worn. But outfits that might otherwise be left sitting forgotten in a drawer can be given a new lease of life if you pass them on. A dress, coat or bag you’ve fallen out of love with might be just the thing for someone else.

So, ever since my first House of Lords swishing party eight years ago, I’ve been on a mission to show others you really don’t have to buy new to look good — however erudite the circles you mix in.

At that first event, there were all kinds of fabulous items — from Topshop to Prada. I walked away with a lovely red Hobbs dress, which once belonged to Baroness Young, as well as a beige jacket from the High Street shop Kew, which I still wear — and I was pleased to see Baroness Helene Hayman, former Lord Speaker of the House of Lords, snapping up a blouse I had brought along.

In fact, I enjoyed the whole thing so much that I’ve started organising my own swishing parties at home. So successful have they been, I haven’t needed to buy anything new for the past two years.

And, while the red dress I inherited from Baroness Young has sadly since been destroyed by moths, I have scooped up several other great finds, which have become wardrobe staples.

I have a pair of ridiculously high patent red heels from Ted Baker, a green cardigan from Monsoon, a slinky, sparkly backless black-and-gold sequinned dress from Zara and a pair of black-and-white palm-tree-print Topshop leggings that I’ve worn to death — they are perfect for casual evenings out.

I remember the young woman who had brought them to the event tweeting: ‘I’ve just seen Baroness Jenkin going off with my leggings.’ 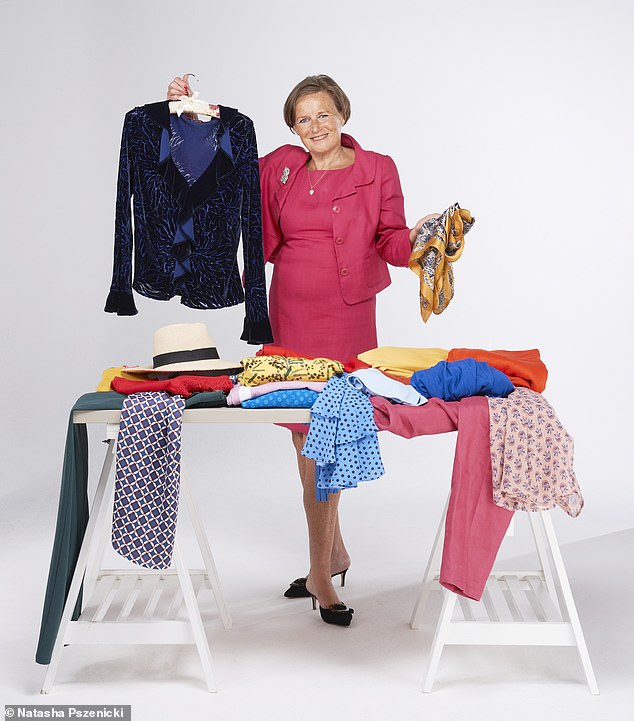 Baroness Jenkin (pictured) revealed she once game a woman her hat to wear for a wedding while at a church celebration with her husband, Bernard

So I tweeted her back: ‘Thank you so much! I love them!’

Swishing is the perfect way to refresh your wardrobe. Whether you are in public life and regularly attend formal functions, or you simply need to dress smartly for work, it’s not always ideal to keep wearing the same thing over and over.

I once had a wonderful pink hat, which I wore and wore. My husband, Bernard, and I were on our way to a church celebration — and I said to him: ‘I’ve got to get rid of this hat or people are going to say: “Poor Mrs Jenkin only has one hat.” ’

After the service, a woman told me how much she loved it. She said: ‘My daughter is getting married and I’ve got the outfit and the shoes but not the hat. Can you tell me where you got yours?’ I said: ‘My dear, woman! Please take it!’ What else was I going to do with it other than take it to a charity shop?

I can’t stand waste. Think about what goes into producing an item of clothing — from the water to grow the cotton plants or to manufacture the textiles, to the labour required to make it — yet so many people think nothing of wearing something once and then chucking it away. I can’t bear the thought of clothes going into landfill.

Even this week, I’ve been wearing a dress my niece was going to throw out because it had shrunk in the wash. It’s a tad short, but it’s fine for wearing around the house on a hot day.

In the past, I’ve been teased for being the ‘Budget Baroness’ — I serve my guests £5 cava and buy Aldi ground coffee, which I keep in an old Fortnum & Mason tin — but it’s a nickname I’m proud of. 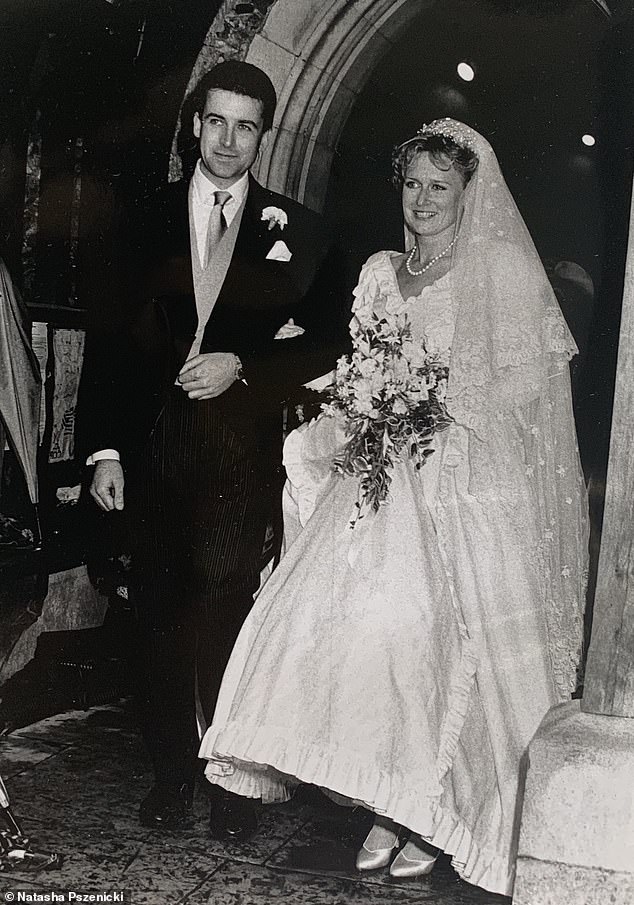 My fashion frugality can be traced back to my childhood. Although I come from a privileged background, we were definitely a hand-me-down family. I had older and younger girl cousins, and all our clothes were passed on. Some of the items we shared were about tenth-hand by the time they got to the youngest — I came about halfway down the pecking order.

Like most people, I became more fashion conscious in my teens. I remember occasionally going to the Biba store in London for hot pants and short skirts. On one of my birthdays, an aunt took me to buy a long dress at Miss Selfridge. But, once I left school at 18 and started work as a PA, I had to dress smartly and so was less interested in trends.

When I was 33 and I married my husband, I decided to rent my wedding and bridesmaids dresses. I couldn’t bear the idea of splashing out on a dress and wearing it for a few hours, then leaving it in a box for 30 years. So we wore them once and sent them back.

Even before I discovered swishing, I have always bought clothes from charity shops or second-hand on eBay. Whenever I need a pair of jeans, for example, I just search ‘Gap’ and ‘99p’ and I usually find something that works. For the smarter outfits I need for official functions, I search with the words ‘mother of the bride’.

When Lady Thatcher died in 2013 and I needed a hat for her funeral, I went to a charity shop and picked up a wonderful black and white one with a little net veil for a few pounds. I gave several TV interviews that day while wearing it and I like to think Lady Thatcher would have approved. 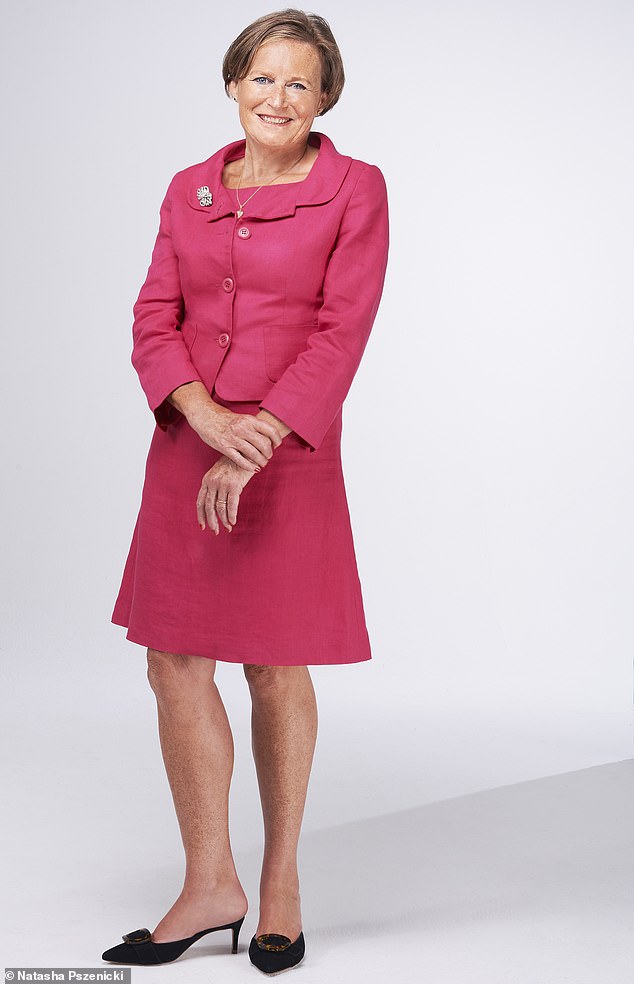 Since then, I’ve learned the best time to buy hats second-hand is straight after Royal Ascot.

Of course, there are exceptions to every rule. I do buy some things new. I wear Gabor suede shoes with a small heel, which are comfortable and smart. And I buy knickers from M&S and keep them until they’re pretty tatty. Who cares what they look like? No one else sees them.

But charity shops aside, swishing is a fun way to update your wardrobe. There’s even a swishing clothes rail in the Lady Members’ Room in the Commons, with donations to the Jo Cox Foundation. And there’s an ironing board for anyone needing to look smart in a hurry. Brilliant.

At the moment, I’m planning a few more swishing events at my home — including a hat swapping event for women MPs. We’ve raised money for the Young Women’s Trust, and on Red Nose Day this year, we sold tickets and made a few hundred pounds.

If you’re thinking of holding a party, the secret to successful swishing is to get a good mix of people and turn it into a social event by serving refreshments.

Everyone should bring at least three items of clothing to swish, and it’s a good idea to have a system to avoid people wrestling over the same stuff.

I’ve handed out playing cards and then summoned ladies up in fours by calling for those holding an Ace to come up, followed by the Kings and then the Queens.

And it is good manners to wash or dry clean any clothes you take to swishing events.

Above all, in these turbulent political times, there is something very refreshing about the way the women of Parliament are coming together and supporting each other by sharing clothes. Whatever our politics, we are happy to walk in each other’s shoes.

Our male counterparts could try it. Suits and shirts are difficult, but they could swish ties or cufflinks. They might discover — as we have — that we all have more in common than we realise.