All her future films will be credited with Thandiwe Newton.

Thandiwe Newton is ditching the Thandie.

The actress has announced that going forward she will be credited as “Thandiwe” — her actual name.

In an interview with Vogue, the Emmy-winner revealed Thandie was actually an error that just stuck with her her entire career… until now. 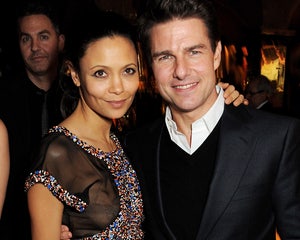 Her parents named her Thandiwe, meaning “beloved” in Shona, the language of her father’s native Zimbabwe.

But growing up and going to school in Cornwall in England, she said “We may as well have been the first Black people anyone had ever seen.” In an effort to feel less different at school (where she was once excluded from a class photograph for sporting cornrows), she said the W in her name drifted, out of its written form and pronunciation.

But now she is reclaiming it.

According to the article, the W was “carelessly missed out” from her first film credit, and just never came back for any other film credit after that; oddly, Newton’s first credit was in 1991’s “Flirting”, opposite Nicole Kidman, in which she played the correctly-spelled character Thandiwe Adjewa.

The spelling of her name wasn’t the only problem to come from the production of the Australian film. As she has alleged before, she said she was groomed by director John Duigan into a relationship, starting when she was 16 and he more than 20 years her senior.

“There’s a moment where the ghost of me changed, you know, and it was then, it was 16,” she said. “He derailed me from myself utterly. I was traumatized. It was a kind of PTSD for sure.”

“I was so distraught and appalled that a director had abused a young actress, and that it was happening elsewhere, minors getting abused and how f—– up it was. I was basically waiting for someone to come along and say, ‘Well, what shall we do about this?'”

While the #MeToo movement has allowed victims to speak up, Newton says women still have the fear of losing their jobs nonetheless.

“I mean literally, people still say, ‘There’s someone else who could take this position, if you’re not happy’, that kind of shit. I do think studio heads need to take much more responsibility.”

Newton’s daughter Nico is now 16 and an actress herself, and her mom is making sure history doesn’t threaten to repeat.

“I went to every photoshoot with her,” she said. “If there was an issue with the photographer, if there was inappropriate language I was on it, didn’t give a f— what anyone thought. When it was time for her to get an agent, I spent a month auditioning for one, even though I knew half of them.”

Dear Coleen: Me and my girlfriend reunited – but she’s pregnant with another guy

These Are The Most Effective Compostable Cleaning Wipes