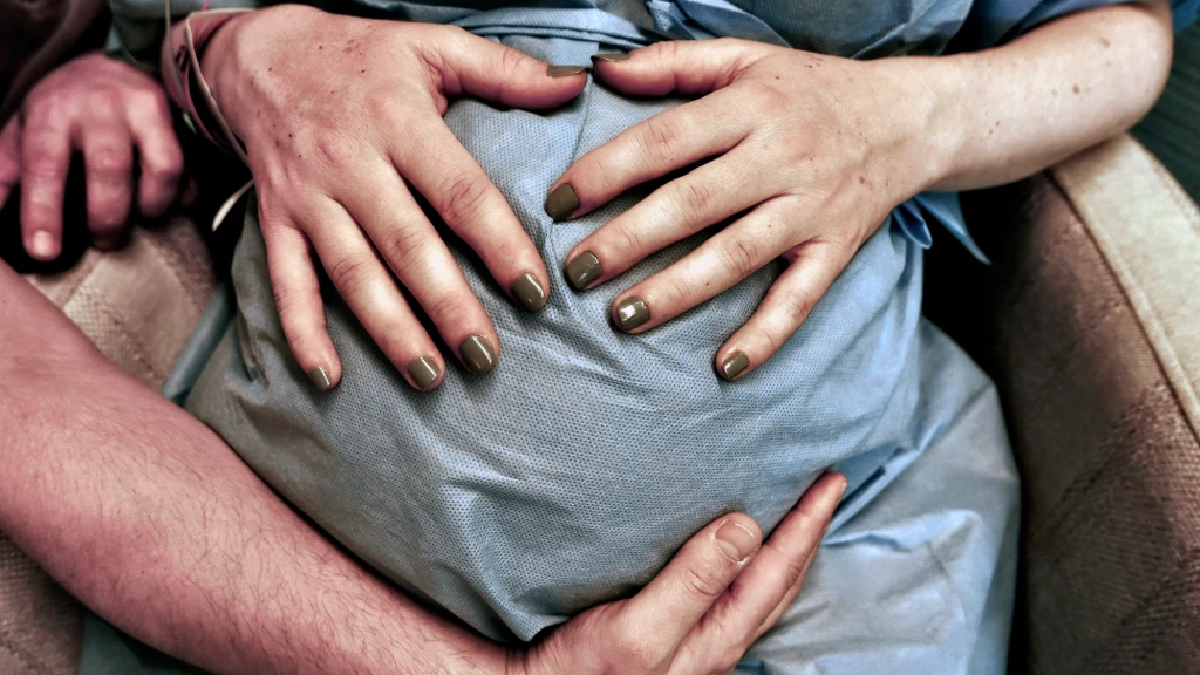 No one is in denial of that.

But being prepared for the life-altering experience of birthing another human – and all the things that come before and after that process – is hard to do.

Still, there are taboos and unspoken truths around motherhood that are seldom shared.

Research by menstrual brand Frida found that 78% of mums are shocked by what their body experiences after childbirth.

Evelyn, 39, from Essex, wants to raise awareness of what it’s really like to become a mum and the things she wished she was told in advance.

Speaking to Metro.co.uk, the solicitor who specialises in children’s law says: ‘Anxiety is a big issue that I suffered with during and after pregnancy. Anxiety associated with whether the pregnancy would last and worrying about the safety of the child once born.

‘Tragedies such as cot death plagued the mind.

‘Having a good support network is crucial in being able to cope with having a newborn especially if it’s your first child. Whether it’s family, friends and professional support services, some support is required to be able to cope.

‘This needs to be place during the pregnancy and post-birth. A good support network will also be able to spot whether you are coping with your newborn, I’ve known a couple of women who have suffered postnatal depression and do not know they have it until someone else has identified this.’

The mental toll is just one part of her experience.

Physically, both the gore and the recovery shocked Evelyn, who believes ‘no one will tell you’ that this is likely to come.

‘I wasn’t warned about the extreme tiredness that would be suffered – it takes time to get back to some kind of normal,’ she adds.

‘But most importantly, no one will tell you, even women themselves, about the extreme bleeding that you suffer postpartum.

‘It goes on for weeks sometimes months after giving birth. It’s quite distressing after going through so much during the birthing experience itself. You need to have maternity pads in abundance.’

While the experience of giving birth will vary person to person, often the act is put on a pedestal – and many women feel full appreciation for how it affects the mind and body is rarely given.

Even just from the change in hormones alone, Evelyn was shocked to find she developed carpal tunnel syndrome as a result of her pregnancy.

She says: ‘It’s a condition that affects the nerves in the hands and wrists. I never knew it was a condition that could be brought on by the hormones during pregnancy and didn’t notice the signs until it got really bad.

She believes many ‘assume’ women will just know about these things, and pressure to avoid talking about the pains of motherhood prevents information from being shared.

‘Once the baby has arrived the experiences of pregnancy and childbirth are forgotten and everyone marvels and focuses on the new baby.

‘The experiences of the mother and how they feel have to take a back seat unfortunately,’ she says.

A study earlier this year found that many mums struggle to talk about the ‘ugly’ side of motherhood and how this can lead to feelings of isolation.

A similar story seems to exist around birthing, as 26-year old Charlotte says she didn’t anticipate how bad pelvic pain and ligament stretching would be.

‘I wish I’d be pre-warned – and how common water infections occur,’ Charlotte, from the Wirral, says.

‘I wish someone had told me pregnant ladies are more sensitive to the sun. One day I went in sun as I normally would and after an hour looked like a red and white sweet.

‘Postpartum no one warned me about the trapped wind you can experience when all your organs move back to their original places.

‘At one point it was that painful I honestly thought I was having a heart attack – we had to call the ambulance out to make sure it wasn’t anything serious as at the time. I was completely unaware it was trapped wind.’

Like Evelyn, this caused mental anguish and worry over what’s ‘normal.’

Had she gone in with more knowledge, Charlotte believes she’d have been much more relaxed and far less on edge throughout all the new experiences.

‘I got myself so worked up when I experienced the pain of my stomach ligaments stretching.

‘I’d also worry about calling my midwives too often, but all my midwives were amazing and really supportive,’ she adds.

This was especially true during ‘the hormone drop’ post-birth, in which she found herself crying at the smallest things, such as a toothbrush.

Sherry, a 32-year-old working at the General Pharmaceutical Council believes she wasn’t warned about the realities of giving birth for fear it would ‘stress her out’ – but she doesn’t think ignorance was bliss in this case.

She says: ‘Looking back, I really wish I had been told the importance of self-care after pregnancy.

‘The emotional, mental and physical wellbeing that gets put to the side because of the precious cargo you are taking care of.

Tragedies such as cot death plagued the mind

‘It was so surreal how much baby Harley picked up on the anxiety and pain that I was going through at the time.

‘Little things like taking a long shower, having a quiet cup of tea or watching an episode of a show just gave me that time to put myself first and made a massive difference to how I was feeling that day.

‘Advice I would have given myself is to never feel bad about putting yourself first in order to help being in a better place to care for your newborn.

‘I really wish I was told about how bad the after effects of giving birth actually are on your body – the stiches and cuts, blood, pain, low moods, and breast-feeding dilemmas.’

Chelsea Hirschhorn, Frida CEO and mum of three, has been leading a campaign encouraging people to share their real birthing stories.

She says there are plenty of ‘unsexy moments of parenting – the ones you don’t typically see on Instagram.’

Chelsea adds: ‘We want to demystify the realities of becoming a mother and encourage more upfront conversations about what really goes down in the delivery room – and beyond.

‘Ultimately, we want first-time mums to feel as prepared as a third-time mum and that ambition is at the heart of Real Birth Announcements.’