United States President Joe Biden will address action on climate change when he meets in person with Prime Minister Scott Morrison and other members of the Quad for the first time next week.

In a statement, the White House confirmed Mr Biden would host the first-ever leaders’ summit of the Quad – Australia, the US, Japan and India – in Washington on September 24. 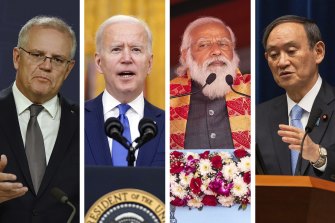 The leaders of the Quad – Australia, the US, India and Japan – Scott Morrison, Joe Biden, Narendra Modi and Yoshihide Suga.Credit:AP

“The Quad leaders will be focused on deepening our ties and advancing practical co-operation on areas such as combating COVID-19, addressing the climate crisis, partnering on emerging technologies and cyberspace, and promoting a free and open Indo-Pacific,” the statement said.

Action on climate change has proved to be the one awkward issue for the Morrison government and Biden administration. Jonathan Pershing, deputy to Mr Biden’s climate envoy John Kerry, last month said the Australian target of a 26 to 28 per cent reduction in emissions by 2030 had “been overtaken by events” and that it should “step forward with a more ambitious effort”.

Mr Morrison has been eyeing a more ambitious target of net-zero carbon emissions by 2050 despite unrest within the Nationals. Mr Biden has pledged to reduce US greenhouse gas emissions by at least 50 per cent by 2030.

The Sydney Morning Herald and The Age last week revealed Mr Morrison was expected to hold his first bilateral meeting with Mr Biden since the President took office in January during his trip to Washington. British Prime Minister Boris Johnson joined Mr Biden and Mr Morrison for their first in-person meeting at the G7 summit in Cornwall in June.

Mr Morrison will use his first one-on-one meeting with Mr Biden to urge the US President to make challenging China’s growing influence in the Indo-Pacific one of his top foreign policy priorities.

Plans to hold a summit of the Quad were thrown into doubt by the upcoming Japanese election and Japanese Prime Minister Yoshihide Suga’s decision not to seek re-election. But the meeting was confirmed after Mr Suga said he would visit Washington later this month for the four-way meeting.

The re-emergence of the Quad in recent years has angered Beijing, which has labelled the group an “Asian NATO” designed to contain China.

The four leaders of the Quad countries held their first virtual meeting in March where they pledged to distribute 1 billion COVID-19 vaccine doses to developing countries in the Indo-Pacific.

The White House said the Biden administration had made elevating the Quad a priority and was part of its push to engage with countries throughout the Indo-Pacific, “including through new multilateral configurations to meet the challenges of the 21st century”.