STEPHEN GLOVER: Why do we tell migrants not to come to Britain, then make it so easy for them to stay?

Whenever migrants cross the English Channel in considerable numbers, as is happening at the moment, government politicians tend to employ two reach-me-down arguments.

One is to blame the French, who are declared shifty and generally unhelpful. If only they would keep their eye on the ball, it is said, fewer migrants would leave their shores for Britain.

The second response is to lay into the people smugglers, who provide rickety, often lethally vulnerable, boats at an extortionate cost to desperate people.

Target these evil merchants in human misery, and the problem will start to go away.

There is, of course, some truth in both points of view. The French authorities can be tricky and obstructive.

Group of young children, women, and a man, sat on the coast at Dungeness, Kent, last week

They were so yesterday, with Natacha Bouchart, mayor of Calais, absurdly describing British plans to blockade the Channel as a ‘declaration of maritime war’.

No less ridiculous was Labour’s suggestion that Home Secretary Priti Patel is ‘devoid of compassion’ for coming up with such proposals. Why can’t it produce come constructive ideas instead of carping?

And it’s also the case that people smugglers are indeed wicked, though no one has yet found a way to get rid of them.

Besides, some of the migrants crossing the Channel appear to be making their own arrangements.

What our politicians seldom do is to ask whether a large part of the problem might be of our own making.

There are idiotic inconsistencies in our policy so that migrants are encouraged to come here while being told to stay away.

Over 4,000 are estimated to have crossed the Channel so far this year.

Consider this. It’s said that only around one in 40 migrants who come to Britain illegally is being sent back at present.

One in 40! Isn’t this a strong incentive for such people to chance their arm?

If I were a young man from Iran or Syria sitting in a godforsaken camp near Calais, I would undoubtedly run the risk of crossing the Channel, in the knowledge that if I were intercepted by the authorities I would almost certainly be allowed to stay in Britain.

Last August, when migrants were already coming across the Channel in significant numbers — though they had not then reached the record of 235 in one day notched up a week ago today — Boris Johnson told anyone hoping to enter Britain: ‘We will send you back.’

Migrants know this is nearly the exact opposite of the truth. They almost certainly won’t be sent back.

According to the Home Office, at least 1,900 people arrived in small boats across the Channel last year, while about 125 were returned to European countries.

That’s approximately one in 15 being deported rather than the one in 40 I have seen quoted, but the odds are nonetheless very heavily in favour of being allowed to stay in the UK. 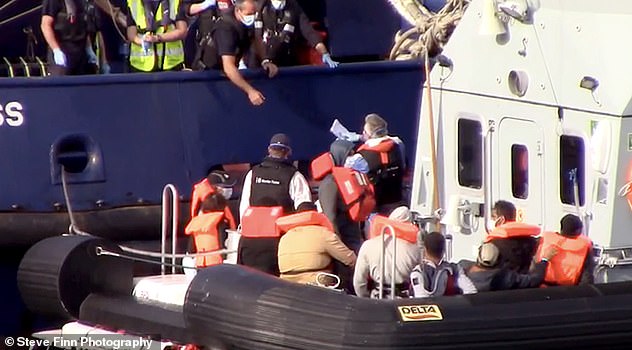 Group of migrants arrived on a vessel and picked up by Border Force patrols at Dover, Kent

And not only stay. An adult arriving in this country receives £37.75 a week, a place to live and free NHS and hospital care.

Granted, most of us would struggle in such circumstances, but they are probably a lot more propitious than those in the often benighted countries the migrants have left behind.

Better, too, than France, where rules for access to healthcare for asylum seekers were tightened in January.

They now get free healthcare only if they have been resident for three months and have successfully applied for a ‘Puma’ health card by establishing their right to be in the country.

So why not take the risk and come here? Moreover, although migrants are usually not supposed to work while their cases are being considered, some do so in our vibrant black economy.

This is much more difficult to achieve in France, where the authorities insist on correct paperwork.

Though it pains me to agree with a French politician, Philippe Mignonet, deputy Mayor of Calais, is bang on the money when he accuses the Government of ‘hypocrisy’, though ‘inconsistency’ might be fairer.

Our position is to tell migrants they must on no account come here because their passage across the Channel is illegal, as well as dangerous. But if they show up in a boat a few miles from Dover, why, we will do our very best to house, and look after, them.

No doubt if the French authorities tried a bit harder — and it seems the Government is going to give them the £30 million they have demanded — they could limit the numbers of migrants, and perhaps arrest an occasional people smuggler.

But the problem would remain — which is that, despite huffing and puffing about illegality, the British Government is effectively hanging a banner over the White Cliffs of Dover which proclaims: ‘Migrants welcome here.’

May I suggest a solution? If the Government believes there are many bona fide asylum seekers in Calais — as it evidently does because it grants asylum to such a high proportion of them once they arrive on British soil — it should consider their applications in a calm and ordered way. In France.

This is indeed the recent proposal of Tony Smith, a former director-general of the UK Border Force. Only those approved in advance would be allowed to enter Britain and remain.

I’d go further. The Government should penalise those who ignore the proper procedures and attempt to come into the country illegally. In the circumstances I envisage, arriving as a migrant, having failed to apply for asylum via the official route, would be an automatic disqualification for admission. 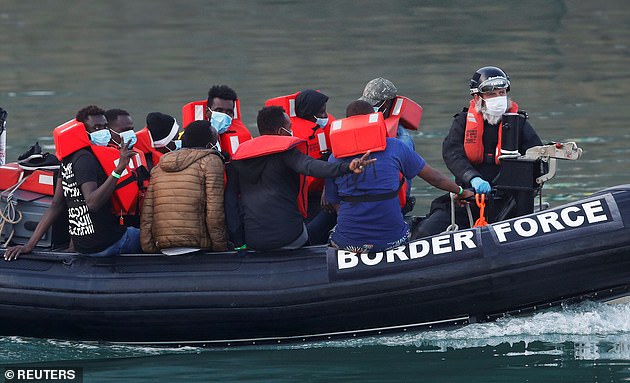 Some lawyers might howl in rage, and claim that such an arrangement contravenes our obligations under the UN’s 1951 Refugee Convention, to which Britain is a signatory.

The Government could legitimately respond that, by setting up an application process in France, it was doing everything possible to consider the claims of legitimate asylum seekers.

One advantage of such an approach is that migrants wouldn’t be a drain on the British taxpayer while their applications were being considered. Nor could they disappear into the black economy.

The benefits of such a scheme would not just be practical, though. It would also be humane. Fewer migrants would attempt the dangerous Channel crossing if they believed their claims were being fairly considered in Calais — and if they knew that turning up in Dover would lead to their being instantly sent back to France.

Of course, the French government would have to agree to these new arrangements, and it’s not certain it would.

What would happen to migrants not granted asylum in the UK? Would France deport them?

But an imaginative new policy is overdue. Earlier this week, Boris Johnson called for a fresh look at laws which make it ‘very, very difficult’ to return migrants who have come to Britain ‘blatantly illegally’.

He appears to have realised that his undertaking of a year ago to send them back can’t be delivered.

We can go on criticising the French, and pointing out the evil of people smugglers. We can call out the Navy.

We can continue to offer a home to almost all migrants who turn up on our shores.

Or, as a country whose Government has boasted that it is now in charge of our borders post-Brexit, we could try to apply good sense to a problem that will otherwise keep on coming back.

Tom Brady Reverses Course on Retirement, Plans to Return to NFL Next Season