When my son calls and says hey, maybe soon we’ll be able to visit him in Brisbane, it’s a little awkward.

I haven’t seen him since February and I miss him terribly. But I’m hoping he might come down here some time because really, I don’t want to go to Queensland. 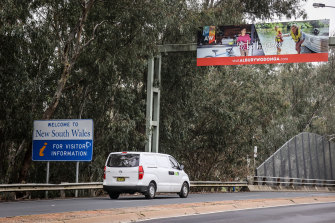 The NSW-Victoria border at Albury-Wodonga has become a flashpoint in the coronavirus recession.Credit:David Gray/Getty Images

I’m one of the lucky ones who has kept their job in tough times and I do have holidays owing next year. But I don’t feel like spending my discretionary income in a state that exploited the sufferings of my own for political gain.

This rules out Queensland – and New South Wales too, even if they ever deign to let me in.

Of course other states had to seal off borders in July as coronavirus infection numbers bolted in Victoria. Containment works.

But those ads the Queensland Labor Party spread through social media in July about how their fair state would be “FLOODED with Victorians” if the Liberals were in power made it clear that they’d be amping up fear and hostility rather than offering words of support.

It must have paid off as Annastacia Palaszczuk is still using Victorians as figures of dread in the final week of her campaign.

And now New South Wales Premier Gladys Berejiklian is determined to keep the borders closed in the south while hammering for the roadblocks to the north to be removed.

While it’s reasonable to consider cautious benchmarks for reopening, she seems awfully keen to go on about how she doesn’t trust the numbers and the standards, drawing it out as an opportunity for another slanging match that keeps families apart. Regional Victoria has lower numbers than Sydney. Is there something else she doesn’t want to talk about?

According to Berejiklian, “it’s easy not to spread the virus when people have limited mobility”.

No, it wasn’t easy. It was bloody hard, often dreary and sad and sometimes scary and eventually rather emotional.

The vast majority of Melburnians have cooperated with the difficult things asked of them. We are Australia’s benchmark best now at living safely in dangerous times. We often disagree with each other about lockdown but we're united in our lack of enthusiasm for interstate pronouncements about our situation.

We have been lectured enough by our own state government about staying the course; we do not need bonus feedback about sloppy habits from other premiers.

Over the last few months the interstate schadenfreude has been pretty obvious. Some politicians have played it up to those in their states who thought it was a hoot to kick a Vic.

No, not all Queenslanders or people from NSW. But the tired old interstate mockery turned nasty with all the #Sictoria hashtags and airy pronouncements about superior management.

Again, this is not an argument against closing borders when infections bolt.

But there’s a way to do it without rubbing our noses in it. Tasmania set a date – December 1 – and a benchmark – fewer than five cases of unknown transmission over 28 days. Their premier, Peter Gutwein, said it was "pleasing to see [Victoria] driving their numbers so low" but they’d monitor the situation. That’s it.

The Northern Territory Chief Minister Michael Gunner has already greenlit visits from those living in regional Victoria from November 2. He thinks Melburnians should be able to visit before Christmas. This isn’t finalised, but he had the grace to say he thought it was looking promising.

Buoyed by that basic goodwill, I've started daydreaming about holidays next year in Tassie or the NT.

I have good friends and colleagues in Sydney and Brisbane I’d like to see, but right now I’m like the beer, Melbourne Bitter. I remember the talk show hosts’ ghoulish banter and the bitchy memes. I don’t want a good-natured ribbing about escaping “Melcatraz”. I don't want to be expected to feel grateful for being allowed in.

I know that at least one in four Melburnians has considered getting out, according to our own polling. And on grim days, in a bad moment, any one of us might have thought about it. But I think I’ll spend my money locally in the cafes and shops and towns that have done it tough. Right now, I’ve never loved my home town more.

Can I take sick leave due to my anxiety about coronavirus?