Why I love being a muscly mum: Like many mothers, Kitty struggled to stay slim — then realised she’d rather be strong than skinny

Motherly pride was my motive for posting the photo.

Having just returned from the gym, I wasn’t exactly looking my best. But when Max, three, jumped on to my back, hanging off me like a monkey, he looked so cute I had to share it on Instagram.

My phone pinged with comments. ‘Look at your arms!’ said one friend. ‘Thighs look good,’ added another. Two more said: ‘You look fabulous.’

As a mother of two whose weight has fluctuated since having kids, it was a bit of a shock. So I took a second peek. And I did look good. My triceps, supporting 14kg of wriggly child, were defined and my thighs were toned — all down to two months of hard work. 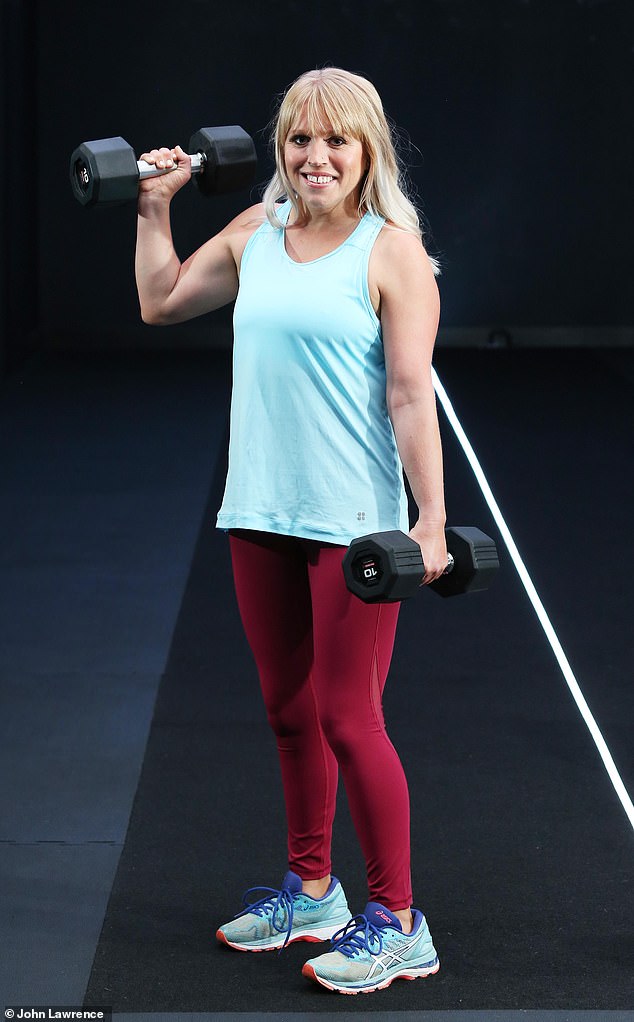 Kitty Dimbleby, 38, (pictured) revealed how was able to overhaul her body after birth by weightlifting at a gym in Bath

You see, like so many women my age — I’ll be 39 next month — I’m now a fully fledged MAMBB (Middle-Aged Mum Building Biceps).

We’re a bit like the female version of the MAMIL, the Middle Aged Men In Lycra who do long-distance cycling with cult-like devotion.

No one is more surprised than me. At secondary school I used every excuse to avoid PE. In my 20s, structured exercise was a no-no. And I could get away with it; at only 5ft, my weight rarely went above 8st, despite the post-work wine and late-night carbs.

But last year my weight hit 9st 11lb, a scale mark I’d only seen during pregnancy. I was exhausted and finding it hard to keep up with my boisterous children.

I tried fitness classes and eating healthily, but I couldn’t stick to it and the weight crept back on.

Then a friend told me about a new gym in Bath offering weight-training strength classes and High Intensity Interval Training. I’d thought of weightlifting as the domain of grunting men, sweating testosterone and ego. But this regime is all about being toned and athletic. I love it.

Now I can bench-press 30kg and squat and deadlift 40kg. I do 22 full press-ups in a minute, too. Four or five days a week I rise at 6.30am to work out. I’m fitter and I have muscle definition where, even at my slimmest, there was none.

The clothes stuffed at the back of my closet fit again. I’m now 8st 5lbs, and have lost at least an inch from my waist, arms and thighs in two months. I have more energy and happily race around the park with my kids. Chloe, six, tells everyone she wants to be strong ‘like mummy’.

My goal is to be in the best shape of my life by 40. And I’m not alone. Three-times Olympic athlete Sarah Lindsay, 38, founder of London gym Roar Fitness, says after the 2012 London Olympics there was a shift in women’s gym goals. ‘They used to just want to be thin, but it changed to strong as they had female role models winning medals,’ she says. ‘The athletic look was desirable.’

Sarah, who trains TV’s Caroline Flack, chef Gizzi Erskine and singer Pixie Lott, says: ‘If you want to change your body long-term you need to weight train, regardless of your goals. For example, you’ll run better if you have strong quads — and injury is less likely.’

Her client base is 75 per cent women in their 40s and 50s, making time for themselves after having children. ‘Weight training helps women age better,’ says Sarah.

She’s right. In a recent report published in the British Journal of General Practice, researchers from University College Dublin found prescribing a mix of muscle strength training and protein powders is the best way to fight frailty in the elderly. In a review of 46 studies involving 15,690 people, the easiest and most successful treatments involved weightlifting.

Celebrities who like to lift include Ellie Goulding, Cameron Diaz, Blake Lively and Michelle Obama

I train with Arron Collins-Thomas, founder of gym ToniqLife, and personal trainer at members’ club Babington House. First, he told me to ditch the scales (yay!), as I might gain weight — since muscle weighs more than the same volume of fat — but my body would look leaner.

‘You have to starve yourself to be very thin, but if you build muscle you increase your metabolic rate, so you’ll need more calories. You can eat lots of healthy food but still look your best,’ he says.

I’m encouraged by stories of fellow MAMBBs. Suzie Beale, 46, from Wedmore in Somerset, has four children. She discovered weight training two years ago while struggling to lose weight by running. ‘Within two months I was getting stronger. After a year I had lost 3st, going from a size 18 to a size 10,’ she says.

Two years on, Suzie can deadlift 115kg, the equivalent of a large man. ‘It has transformed my life,’ she says.

‘The arthritis in my hands has gone and my cholesterol is lower. It’s empowering — sometimes I work out near friends of my son, 18, and I’m stronger!’ 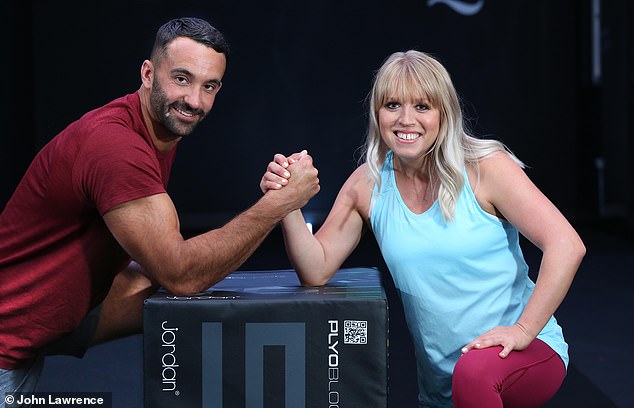 GP Rebecca Kay, 45, a mum of five from Wokingham in Berkshire, began weightlifting when her youngest was four. ‘In a couple of months people started commenting on my arms,’ she says. Now she feels better than she did in her 20s: ‘I weighed 11st 10lb 20 years ago. I’m 9st and more toned, but still have curves.’

Bex Bennett, 36, from Derby, is a junior doctor with a three-year-old. In two years, she’s gained 6lb but dropped a dress size. ‘Women and men all admire my new physique,’ she says.

Clinical psychologist Linda Blair notes: ‘Women are celebrating their bodies rather than punishing them by starving them. They’re showing their children that you can do anything at any age.’

As with all exercise, there is risk. Marie Curtis, 46, a mum of two and a jewellery designer from Bath, started weightlifting five years ago. ‘I was fine for the first year, but then I got a niggle here and ache there. I ignored it until my leg started to drag,’ she says.

‘An MRI showed the bottom disk in my spine had worn away, causing nerve damage. I used weights which were too heavy, and my technique was wrong. I ran and I think the combination was too much. Now I can’t sit comfortably.’

Arron Collins-Thomas and his team are very safety-conscious. ‘I won’t let people over-train.

‘We have two trainers at every class to ensure everyone is using the proper techniques,’ he says. ‘I also encourage clients to eat enough of the right foods, get sleep, take rest days and watch their stress levels. All of this helps prevent injury.’

So far, I’ve had no issues —my only concern is I feel so good after a workout it’s hard to take a day off from it!

While I won’t be taking on the Hulk in an arm wrestle any time soon, I feel strong, healthy and fantastic.