Hayek, however, praised costar Antonio Banderas and director Robert Rodriguez for how they handled the scene.

“Desperado” was the film that really introduced the US to Salma Hayek — but there’s at least one scene in the movie she doesn’t look back on fondly, 25 years later.

Hayek has spoken a bit about having a hard time filming her character Carolina’s sex scene with Antonio Banderas in the past, telling Elle back in October it was “a very difficult thing” for her to shoot. Opening up more about her issues with doing the scene on this week’s Armchair Expert podcast, Hayek spoke about her reservations. 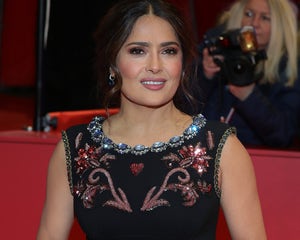 “They have a love making scene and it’s also when all the bad guys show up to kill them and they are making love and killing people and I’m like, this is unbelievable,” host Dax Shepard said, raving about the scene in question as they spoke about the movie.

“That was another thing … oh god I’m gonna be in trouble,” Hayek interjected. “The love scene was not in the script. It was demanded by the studio when they saw the chemistry. And I had a really, really hard time with that. Welcome to my world.”

At the time, Hayek was just thrilled to be in a Hollywood production.

“I said, ‘Oh my god, I’m doing this amazing movie, this is it. Hell yes, I made it!'” she recalled of her initial casting. “They paid me very little money, but I spent it right away, because now I’m a Hollywood star. It went really fast in Banana Republic, like one shopping trip and I had no money for the rent. I learned really fast that it does not work like that in Hollywood, save your pennies because you don’t know when the next one is gonna come.”

She went on to explain that the decision to add a love scene between her and Banderas’ titular character came shortly after the studio started seeing dailies. When asked whether she could enjoy watching that scene back now, she said, “No.”

“They were amazing,” she said of director Robert Rodriguez, Banderas and Robert’s then-wife/producing partner Elizabeth Avellán. “The wife of Robert Rodriguez at the time became my best friend, she was the producer. Robert Rodriguez, thank god, can also do everything on a film set. He can do the sound, he can operate the camera and he was like my bro. They closed the set and it was Robert, Elizabeth, Antonio and I.” 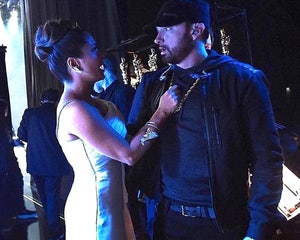 Why Salma Hayek Dumped Water Over Eminem Backstage at The Oscars

“That’s nice. Except that I had never done anything like that. When we were going to start shooting, I started to sob,” she recalled. “I said, ‘I don’t know that I can do it, I’m afraid.'”

Though she said Banderas was “an absolute gentlemen, super nice” and someone she’s still very close with all these years later, he clearly wasn’t as hung up about the situation as she was.

“So it scared me that for him it was like nothing. That scared me because I had never been in front of someone like that, in that situation,” she explained. “I started crying, like they’re making me feel terrible. Antonio was the most free person and I was so embarrassed, I was crying. They were great, but I was not letting go of the towel. They would try to make me laugh and take it away for two seconds, I started crying again but we got through it.”

When Shepard noted that sounded “horrible,” Hayek made sure to repeat she had nothing ill to say about the director, her costar or producer — and praised their support during her discomfort.

“They were amazing though, they were amazing. They did the best with what they could do at the time. They were so magnificent this group of three people,” she said. When it became clear she’d only be comfortable for moments at a time, Rodriguez said he’d be able to easily edit everything together with brief clips, no problem.

Hayek explained part of her hesitation also came from thinking about what her father and brother would think of the scene and whether they’d “get teased” by other men for her participation in it.

“I just said, you can never see it,” she explained, adding that she had them leave the premiere during the scene before coming back into the theater.

Hayek and Rodriguez have continued to work together in the years since “Desperado,” collaborating on that film’s sequel, “Once Upon a Time In Mexico” and films like “From Dusk Till Dawn,” “The Faculty,” “Spy Kids” and “Four Rooms.” 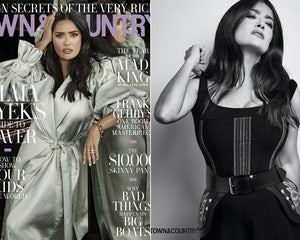