‘I can’t do this and look after my children at the same time!’ William reveals why he and Kate DIDN’T bring George and Charlotte along to a kids’ Christmas party at Kensington Palace

The Duke and Duchess of Cambridge threw a children’s party at Kensington Palace yesterday with party games, crackers making and lots of sweets – but there were three little people who didn’t make it on to the guest list.

The royals threw open palace doors for a party for families of deployed personnel from RAF Coningsby and RAF Marham, but didn’t take their children George, five, Charlotte, three, and eight-month-old Louis along to the celebrations.

And as William joined in making chocolate treats with youngsters, a party guest who was perhaps hoping to catch a glimpse of the royal children asked the Duke: ‘Where’s your kids?’.

‘I can’t do this and look after my children at the same time,’ he replied, laughing. 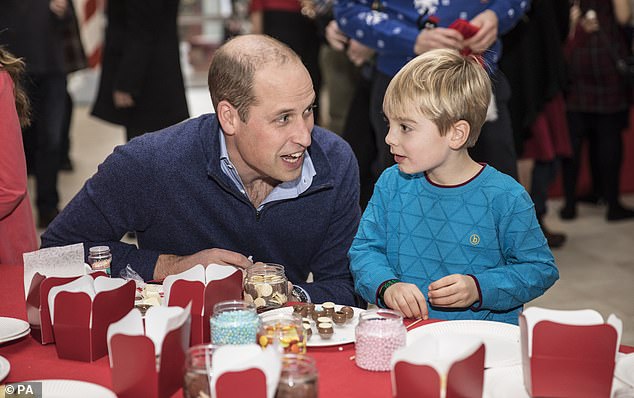 Prince William chatted to Harry O’Grady, five, during a Christmas party for military children at Kensington Palace as they made chocolate treats, and admitted he couldn’t bring his children along as they would be too distracting

During their chocolate making session, a five-year-old boy called Harry O’Grady introduced himself to the Duke.

‘I’ve got a brother called Harry,’ William told him, while Kate chatted to a little boy and told him: ‘George loves planes too.’

During a fun-filled afternoon, the Duke and Duchess, played games with the children and helped them make Christmas cards and treats

In a heartfelt speech, Kate told the invited wives, partners, grandparents and children: ‘Not only are we grateful for you coming here to join our party, but also for the sacrifices you make on a daily basis on behalf of the nation.’ 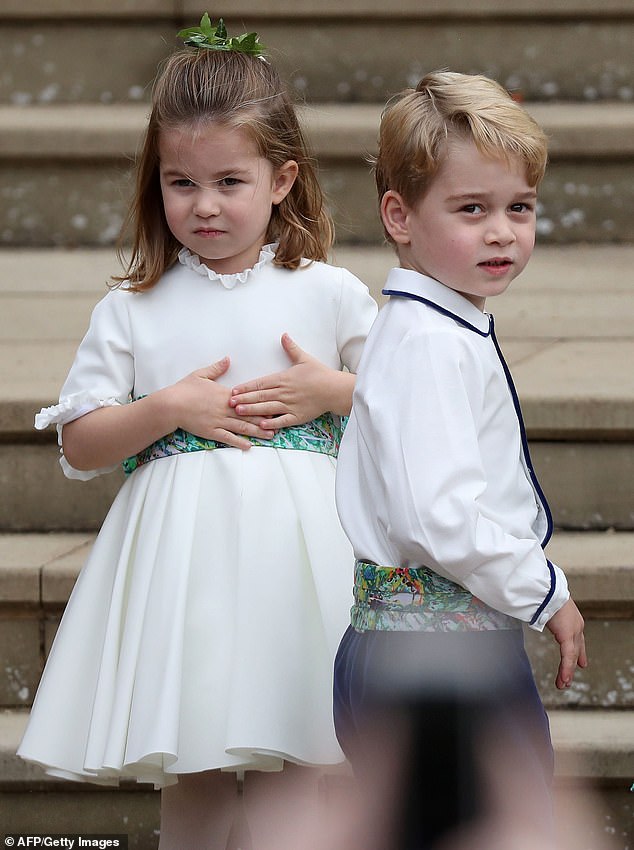 Prince George and Princess Charlotte didn’t get to attend yesterday’s children’s party, despite the festivities taking place a short walk away from their family home at Apartment 1A 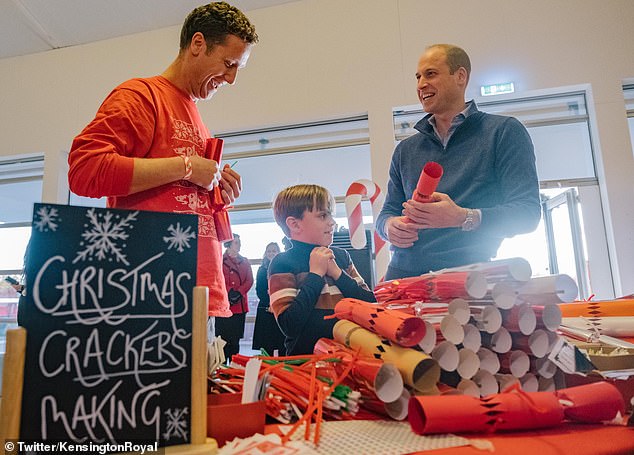 It’s beginning to feel a lot like Christmas! Prince William got involved in making some festive crackers with children during the bash at the Kensington Palace orangery

Today the royals will travel to RAF Akrotiri in Cyprus tomorrow on a special ‘Royal Mail’ flight loaded with gifts and cards for personnel from their families.

William and Kate will meet men and women separated from their loved ones over the festive period as they take part in operations against Islamic State (IS).

During their brief visit to RAF Akrotiri on the Mediterranean island, the duke and duchess will meet military personnel, families living on the base, wider station personnel and members of the local community. 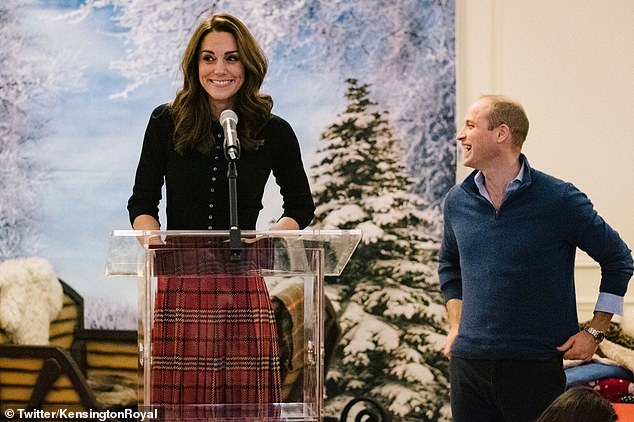 Opening up! During a speech at the party, Kate recalled being left at home when William was serving as an RAF search and rescue helicopter pilot as she sympathised with families 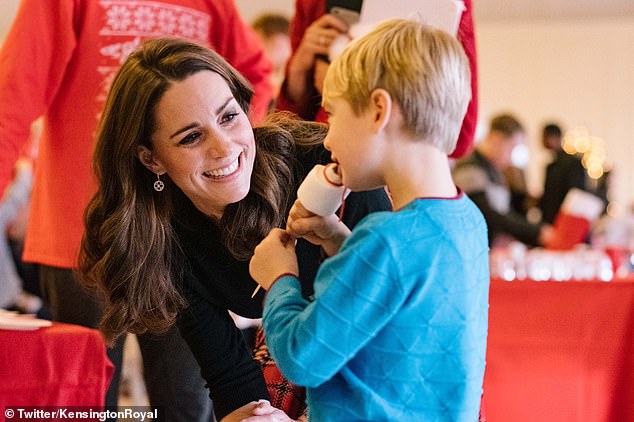 Smiling Kate chatting to five-year-old Harry O’Grady: Even when you’re in the presence of royalty, there’s nothing more important than nibbling on a marshmallow snowman!

The couple will visit and officially open the recently renovated Oasis centre, a recreation area used when the military are not on shift.

They will also be bringing presents from some of the families they met on Tuesday for military personnel deployed at the RAF base.

William is Honorary Air Commandant of RAF Coningsby in Lincolnshire, which is home to Typhoon squadrons which deploy to Cyprus and fly operations in support of Op Shader, the UK’s contribution to the ongoing campaign against IS.

They work alongside 31 Squadron, a Tornado GR4 unit based at RAF Marham in Norfolk, which is also involved with the campaign.

RAF Akrotiri is the home of the Cyprus Operations Support Unit, which provides joint support to British Forces Cyprus and operations in the region to protect the UK’s strategic interests. 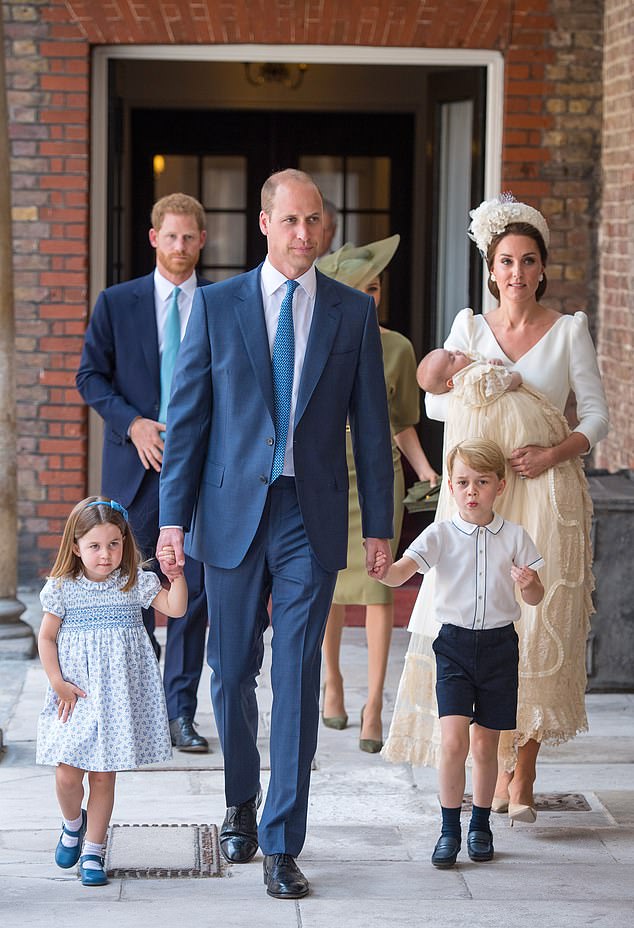 How 'fragrance zoning' can boost your productivity – and your libido!